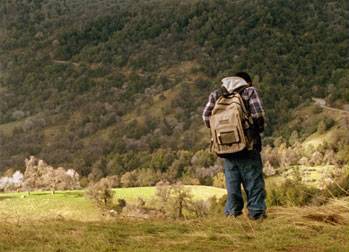 Sala Rekalde presents Pine Flat, the first solo exhibition of work by Sharon Lockhart in Spain. This is the most recent piece by this renowned American photographer and filmmaker and is the outcome of three years of intense work.

Pine Flat is a small rural community in the north of the state of California. Yet what matters most to the artist is the fact that it could be anywhere, any other rural context in similar circumstances. Lockhart has focused her lens on the landscape of this place and its inhabitants, in particular the children. Her almost painterly images, which are highly descriptive, elude any attempt at narration, the emphasis being on the pleasure of the gaze and the notion of temporality in her work.

There is an affinity between Pine Flat and portraiture and landscape painting, yet the film strives to create a universe of its own in which the viewer disregards their own context and enters fully into this particular vision of a universe defined by children on the one hand, and by the individual way they each behave in the landscape on the other. Accustomed as we are to the image as a source of information that enables us to read and interpret an event, Pine Flat is an invitation to adopt a different gaze. By ignoring our usual determination to interpret everything we see, we will come to a better understanding of the mechanisms we employ to arrive at conclusions as spectators, not of art, but of our everyday context.

Pine Flat is a vast installation that consists of four parts:

Pine Flat Studio Portraits, a gallery of some 20 portraits of the 30 or so children in the community, taken in an improvised photographic studio to which the children were invited.

Four Seasons, a series of four landscape photographs that show the natural surroundings of the place in the different seasons of the year.

Untitled, a room in which you can hear the voice of a child singing his own versions of his favourite songs, renditions that are so personal that even those familiar with the songs will find it difficult to recognise them. This room also has a large portrait photograph on display of the boy performing with a guitar.

Pine Flat itself, a large cinematographic diptych shown in two screening rooms. This diptych is made up of twelve sections or ‘film portraits’, all shot on 16 mm, each of which lasts ten minutes. In one of the rooms, the viewer can watch what could be described as a ‘moving portrait’ of a child filmed on his or her own surrounded by the wilderness, while a ‘film portrait’ of a group of two or more children interacting is screened in the other room. The viewer’s impression might be that he has spent ten minutes looking at a painting in an attempt to decode the maximum possible visual information in the image.

Lockhart has made the decision that just a section should be shown in each of the rooms, so that if the viewer wishes to see the entire diptych, he or she must return to the exhibition for a minimum of 20 minutes, spending ten in each screening room, every day for a week.

This film, Lockhart’s fifth, will also be screened as part of the exhibition on 17 January and 7 February 2006 in the Auditorium of the Bilbao Fine Arts Museum. Running for 138 minutes, the film is divided into two groups of ‘moving portraits’, with a strategic INTERMISSION of ten minutes between them, during which music is performed by the boy Balam García. Recently, the film Pine Flat has been officially selected for the Sundance Film Festival, that will be held in January 2006 in Park City (Utah, USA).

The exhibition will be accompanied by a catalogue published in Basque, Spanish and English. This publication will be extensively illustrated with works from the exhibition and photographs of the installation. It will also include articles by Chus Martínez, the exhibition curator; Catherine Wood, curator at Tate Modern; Mark Godfrey, lecturer at the Slade School of Fine Art in London; the writer and journalist from Barcelona Ignacio Vidal-Folch; and an interview with Ines Katzenstein, curator at the MALBA (Museum of Latin American Art) in Buenos Aires.

Once the exhibition has closed at sala rekalde in Bilbao, it will travel to the Museu do Chiado in Lisbon, Portugal. The work “Pine Flat “ will also be exhibited at the Walker Art Center, in Minneapolis, and at the Fogg Art Museum of Harvard University, United States.