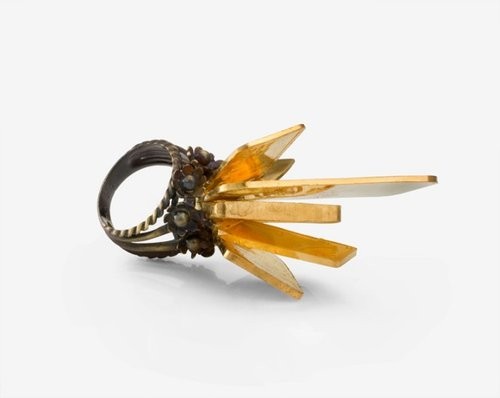 Salon 94 Freemans is pleased to present a new exhibition of jewelry by Karl Fritsch and paintings by Richard Wathen.

Challenging the conventions of both sculpture and jewelry making, Munich-based artist Karl Fritsch creates rings that read as miniature sculptures. Often intricately constructed yet coarsely finished, Fritsch’s rings are marked by rough, oxidized finishes and detectable fingerprints, conveying the urgency of the rings’ materialization. He playfully mixes high and low materials, giving equal billing to diamonds, rubies, plastic pearls and glass gemstones. By making all his sculptures wearable in the form of rings, Fritsch liberates his media from static presentation and creates an unprecedented intimacy to the works, simultaneously subverting the notion that jewelry is mere décor and that sculpture must be admired at a distance.

The exhibition also features three new paintings by British artist, Richard Wathen, each featuring an enigmatic female figure of undeterminable age against a muted, tonal background. Transposing the cubist idea of using multiple perspectives of a singe object or person to describe the whole subject or experience, Wathen’s paintings convey multiple emotional and psychological states, revealing a subject whose lack of specificity tends toward the allegorical rather than the representational.

Takeshi Miyakawa has created a playful display system for the rings, inspired by Karl Fritsch’s experimentation with materials and their unorthodox applications. Miyakawa constructed the display surfaces by vacuum-forming PVC around bricks, wood, and Styrofoam blocks. These modular pieces can be lit from within and presented in a wide range of configurations.

Takeshi Miyakawa, (b.1962, Tokyo, Japan) lives and works in New York. He currently works as a model maker for Rafael Vinoly and is currently working on the Mariko Mori installation for Naoshima Island set to open in July 2010. His furniture design has been featured in the exhibition Design Bloom in New York City and Brooklyn. He designed a new desk structure for Salon 94 Freemans as part of Rock Garden in December 2009.