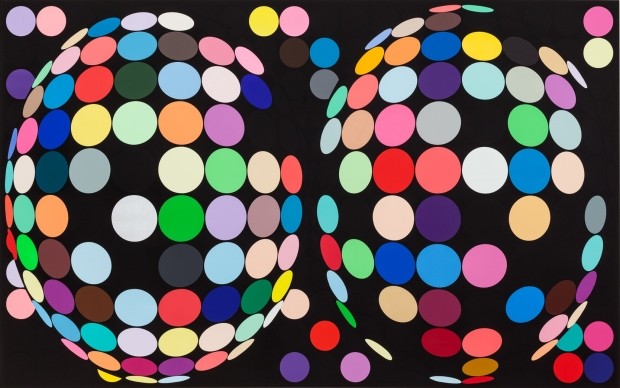 Salon 94 Bowery is pleased to present Swiss artist Sylvie Fleury’s first exhibition with the gallery entitled It Might As Well Rain Until September. The show is Fleury’s first major solo show in New York in over ten years, and will present a survey of the artist’s work made over the past two decades, alongside new site-specific pieces.

Fleury is known for work that considers luxury objects, consumer identity, status symbols, and the fetishized cultures of fashion and beauty. The investigation into the virtues of consumer society and media messages is a trademark of the artist’s best-known pieces. To foreground her first exhibition at Salon 94, Fleury will install a group of new paintings called Go Bust that, like her best known pieces, often directly quote and re-contextualize the celebrated signature works of white male artists. Sylvie’s new pieces riff on both the Op-Art icon Victor Vasarely’s Gordes series, which famously uses geometric distortion to create the illusion of bulbous forms on a flat surface, as well as Damien Hirst’s colorful Spot paintings. The imagery in Fleury’s paintings takes the single and flat masculine forms and doubles them to be read as breasts, rotund female forms posited as the archetypal “dot.”

Fleury’s installations hinge on the relationship between seduction and superficiality, art and advertising, conceptualism and consumerism. Fleury’s oeuvre is a decidedly feminist one, often subverting the traditional male modernist art practices with her own use of cast bronze sculpture and abstract painting. In a Daniel Buren-like gesture, Fleury paints the space with floor-to-ceiling vertical stripes that periodically contain oval-shaped blanks—or feminine openings. The stripes fit into Fleury’s “girlie” pink-purple palette, a strategy she uses to provocatively mark major art historical movements such as minimalism and conceptualism with the slight sparkle of a fashion trend.

Also featured are neon signs that appropriate messages from the beauty industry. Commercial slogans like “Be Amazing” and “Moisturizing is the Answer” cast a rosy hue on the gallery. Fleury re-uses retail mottos targeted to women as ready-mades that radiate ultimate philosophies for viewing in a visual culture. An oversized and super shiny razor-blade leans against the wall like a reflective John McCracken plank, a minimalist object of material fetish and surface sheen, in this case with a potentially fatal edge. A vertical wall piece of metal boxes parrots the Untitled stacks of Donald Judd, though Fleury’s indelicate version includes saggy, drippy, brightly colored turds that ooze out of and over each part. Marking these recognizable objects with ambiguous traces of commerce and art historical content, she uses the work like a body, susceptible to styles, desires, and surface projections.

Sylvie Fleury was born in Geneva in 1961, where she currently lives and works. She has been exhibiting her work regularly since 1991. Recently, she has been the subject of one-person shows at Centre de Arte Contemporaneo in Malaga, Spain in 2011; Musée d’Art Contemporain de Genéve in Geneva, Switzerland in 2008; and Kunsthalle Wien in Vienna in 2006.
www.salon94.com