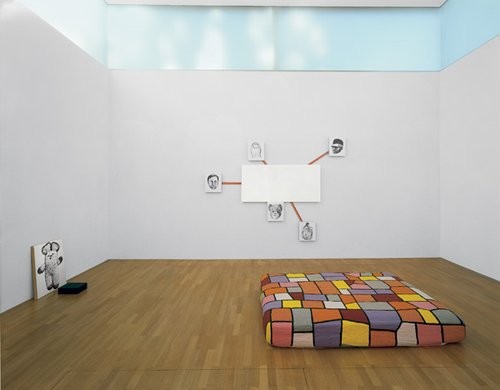 In a comprehensive exhibition The Goetz Collection is showing more than 40 works by American artist Mike Kelley. The spectrum ranges from early paintings from 1976 to large installations from his Kandors series of 2007, and shows the wide variety of the artist’s media through selected individual projects. Several large installations, in some cases with elaborate video projections, are complemented by a series of drawings, an audio installation, sculptures and numerous videos. Works by Mike Kelley were first shown at the Goetz Collection in 2000 jointly with works by Peter Fischli and David Weiss. Following further purchases in recent years, Ingvild Goetz has built up one of the largest private collections of Mike Kelley’s works worldwide. This now makes it possible to put on a wide-ranging exhibition of individual works by one of the most important artists of the present day, following a curatorial concept that he himself developed.
Right from the outset of his career as an artist, the principal theme of Kelley’s output has been the American social system. His approach is conceptual and multimedia-based. Kelley’s ideas and actions were influenced by a generation of artists that included Joseph Beuys, Vito Acconci, Dennis Oppenheim, Bruce Nauman and Chris Burden. His preoccupations with language play, and interest in sound and music were initially inspired by Dadaists such as Kurt Schwitters and Raoul Hausmann. Local bands such as the MC5 and the Stooges, as well as Sixties counterculture, spurred Kelley’s youthful interest in visual art. Sources for his works range from the American hippie and punk movements, through caricature and folklore, to Christian iconography and historical research. After giving up performances, Kelley became known to a broad public from 1987 through his Half a Man series. In this, he utilized everyday objects for the first time, especially second-hand craft items.
At first glance Kelley’s installations appear playful, but upon a closer investigation they incite the viewer to examine their own ideological presuppositions, repressed memories and sexual conditioning. Kelley explores psychological processes, scientific models, behavioral patterns and sexual identities with intensity.
In the exhibition at the Goetz Collection, these approaches are examined in the two installations Citrus and White (1991) and Unisex Love Nest (1999). In the former a tangle of worn-out soft toys suspended from the ceiling is sprayed at regular intervals with the scent of pine needles from the nozzles of two futuristic wall sculptures, to give an apparently purifying, neutralizing effect. The second installation is a recreation of a typical “little girl’s” bedroom as found in an American women’s magazine. However, the title Unisex Love Nest and the Cross Gender/Cross Genre video playing on the TV monitor point the viewer in a different direction to challenge traditional gender-roles.
Similarly concerned with preconceived gender roles is the Alma Pater (Wolverine Den) installation of 1991. It refers to the sports ethos of Kelley’s own alma mater, the University of Michigan in Ann Arbor. Kelley tackles the typical attitude of American universities, which give precedence to sport over a liberal arts education. The room depicts an overtly male aesthetic utilizing dark colors and typical sports motifs.
The Extracurricular Activity Projective Reconstruction series (2000-present) is a planned series of 365 individual videos and video installations. These consist of recreations of photographic scenes that Kelley found in high-school yearbooks, which he used to construct invented narratives. The pictures often have a carnivalesque, sexual or artistic overtone. Numbers 2-32 of the series were grouped together under the title Day is Done. With the three large installations: Woods Group, Lonely Vampire and Joseph Supplicates (all 2005), the Goetz Collection presents three of the most important works from the series.
Spatially and chronologically, the Kandor 7 sculpture is the culmination of the exhibition and is characteristic of Kelley’s most recent works. “Kandor” is the capitol of the planet Krypton in “Superman” comic books. Kelley has reconstructed numerous representations of the city as sculptures.
Mike Kelley was born in the Detroit area in 1954. He initially studied at the University of Michigan, Ann Arbor, and graduated with a MFA in “post” studio art from the distinguished CalArts School in Valencia in 1978. Since then he has lived in Los Angeles. Until 1987 he worked in both performance and visual art. He continues to work in a variety of forms including installation, drawing, painting, video, sound works, and sculpture. He is a member of Destroy All Monsters, an improvisational noise band (featuring artists Cary Loren and Jim Shaw) which has performed internationally. Kelley has collaborated on projects with such notable artists such as Tony Oursler, Bruce and Norman Yonemoto, Raymond Pettibon and Paul McCarthy.
A catalogue (German/English) will be published for the exhibition, with an introduction by Ingvild Goetz, contributions by Mike Kelley and Rainald Schumacher, an interview with the artist by Karsten Löckemann and Stephan Urbaschek, a glossary compiled by John Welchman (a first for Kelley’s works) and a register of works compiled by Katharina Vossenkuhl.
www.sammlung-goetz.de