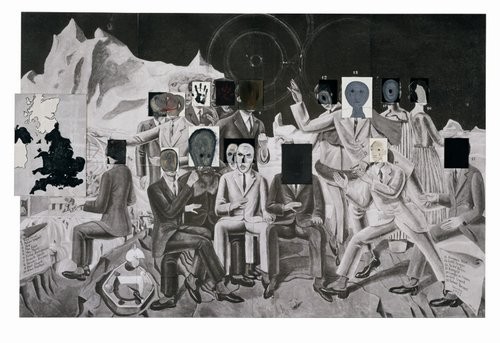 In a major exhibition the Goetz Collection is showing almost forty works by the Berlin-based artist Thomas Zipp. Over the past five years Ingvild Goetz has assembled a remarkable number of the artist’s works produced between 2002 and 2008. This core collection has made it possible to devote a solo exhibition to one of Germany’s most important contemporary artists. The show has been conceived by Zipp himself, on the basis of the items in the collection. In the exhibition context, the selection of works by the collector and the museum building designed by Herzog & de Meuron meld with the ideas of the artist.

Zipp likes to combine individual works into a total work of art by intervening in existing spaces so as to create specific contexts for specific works on specific occasions. This approach has guided his work in the Goetz Collection show, MENS AGITAT MOLEM (Luther & The Family of Pills). He presents his characteristic prints, paintings and sculptures in an interactive dialogue. The complex piece Dirty Tree Black Pills (2005), consisting of thirty black pill- or bomb-shaped sculptures on an extensive platform, two paper collages, a large painting and a neon lamp hanging from the ceiling, forms a kind of epicentre, occupying the entire main area in the basement.

The wide range of concerns that Zipp addresses in his work encompasses art historical, scientific and political issues, which he presents artistically with an often wry sense of humour. A purely analytical approach does not do justice to his work, since it also has a strong associative component, with what he leaves unsaid naturally exerting a special attraction. He engages with the human mind and consciousness in a great variety of states, surrealistic aspects playing a central role in this underlying theme of his art.

Thomas Zipp was born in Heppenheim in 1966. From 1992 to 1998 he studied with Thomas Bayrle at the Städel art school in Frankfurt and at the Slade School of Fine Art in London. He taught at the Hochschule für Bildende Künste Karlsruhe from 2006 to 2007 and took up a post as professor at the Universität der Künste Berlin in 2008. Since the late 1990s he has had various solo exhibitions and has participated in a number of group shows in Germany and abroad, including exhibitions at the Hamburger Bahnhof in Berlin (2003), Tate Modern in London (2006), P.S. 1 in New York (2006) and the Lenbachhaus in Munich (2007).

A catalogue in English and German is being published in conjunction with the exhibition. It contains an introduction by Ingvild Goetz and texts by Dominikus Müller, Karsten Löckemann and Stephan Urbaschek, along with a list of works compiled by Katharina Vossenkuhl.
www.sammlung-goetz.de