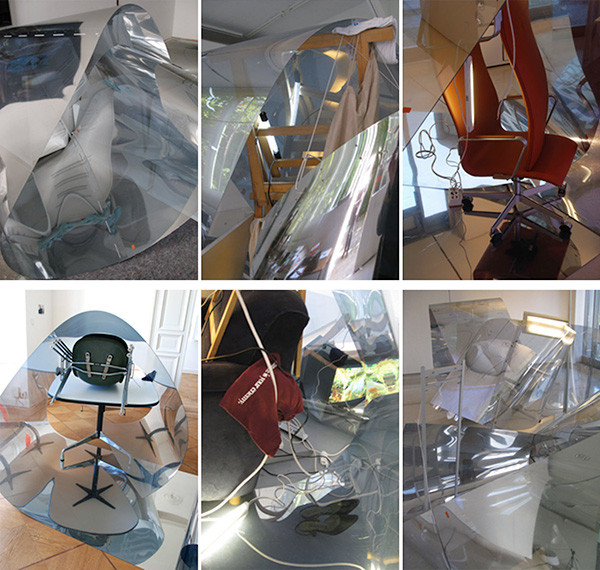 "Not he who believes in the Holy Scriptures has religion, but he who does not need one and could create one by himself." Even if this statement by Friedrich Schleiermacher, taken from his Monologues published in 1800, risks to have long been reassessed and outdated, its continuing timeliness can be tested, as Ulrike Flaig (*1962) offers us a cult shrine in the context of an art exhibition. A cult shrine has many titles such as Tabernacle, Tora Shrine, Kaaba, or in this case in the tradition of Minimal Art: Untitled, 2013

Ulrike Flaig ́s secularized cult shrine turns the production of religion into a medium of aesthetic communication and is the key to the current exhibition. As in her latest extensive institutional exhibition in the Villa Merkel in 2006, the artist condenses the whole space of the gallery with a rather inconsistent industrial material: A foil which is, depending on the light conditions, likewise visible and invisible.

The same foil is used by the artist in performances and installations and represents for her a primary material, connecting its basic quality to a basic proposition about her work: A materialized movement which dematerializes itself through its quality and which is transferred into a subjectivity of reflection. All is mirrored, all is embraced.

The artist’s practice is rooted in the field of experimental music. Her visual Live Acts with video were developed in a subculture music scene in the 80s and are today part and parcel of the international festival culture and the WDR Studio für akustische Kunst. Within the scene she is an insider figure who initiated many things, but who always remained sceptic about the art market.
www.sassatruelzsch.com