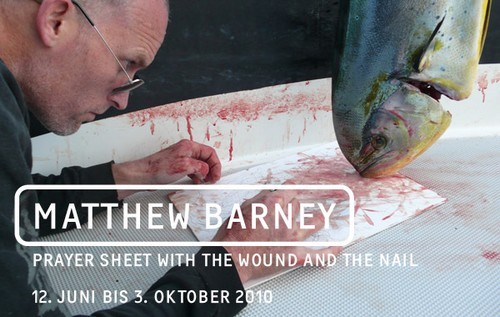 MATTHEW BARNEY
"Prayer Sheet with the Wound and the Nail

This year Schaulager is presenting Drawing Restraint by Matthew Barney. Drawing Restraint is a series of performances, numbering sixteen thus far, in which Matthew Barney leaves traces in an environment of self-induced physical and psychological restraints. Works emerging from these performances, such as sculptures, vitrines, drawings and videos, are juxtaposed in the Schaulager exhibition with works of art from the Northern Renaissance.

The basic idea of Drawing Restraint is that form can only take shape when it struggles against resistance. Drawing Restraint was initially conceived such that its apparatuses would frustrate the ease of drawing. The first performances consisted of environments with ramps, sloping surfaces, elastic belts and obstacles that expressly served to restrict the artist’s skill.

As the series developed, the setting of the performances became increasingly sophisticated and the narrative more allegorical.

Objects deriving from the performances capture certain aspects of the action as "secondary forms“ – drawings, sculptures, vitrines and photographs. These objects are never random but always carefully selected and arranged. Each action is also documented on video.

The Foundation that operates Schaulager, the Laurenz Foundation, will acquire, in partnership with the Museum of Modern Art (MoMA) in New York, Matthew Barney’s archive of this performance series. Thanks to the joint acquisition by these two institutions, the Drawing Restraint Archive will be presented to the public as a whole for the first time.

The so-called Drawing Restraint Archive is the point of departure for a significantly broader-based exhibition at Schaulager, with works from the Emanuel Hoffmann Foundation and additional loans. Matthew Barney’s works enter into a dialogue with works of Christian iconography by artists such as Martin Schongauer, Albrecht Dürer, Urs Graf and others.

Schaulager has appointed Neville Wakefield as guest curator for the exhibition. The New York based author and curator has a profound knowledge of Matthew Barney's work and will be organising the exhibition project in close collaboration with the artist and the Schaulager team. Schaulager is the sole venue for this exhibition.
www.schaulager.ch