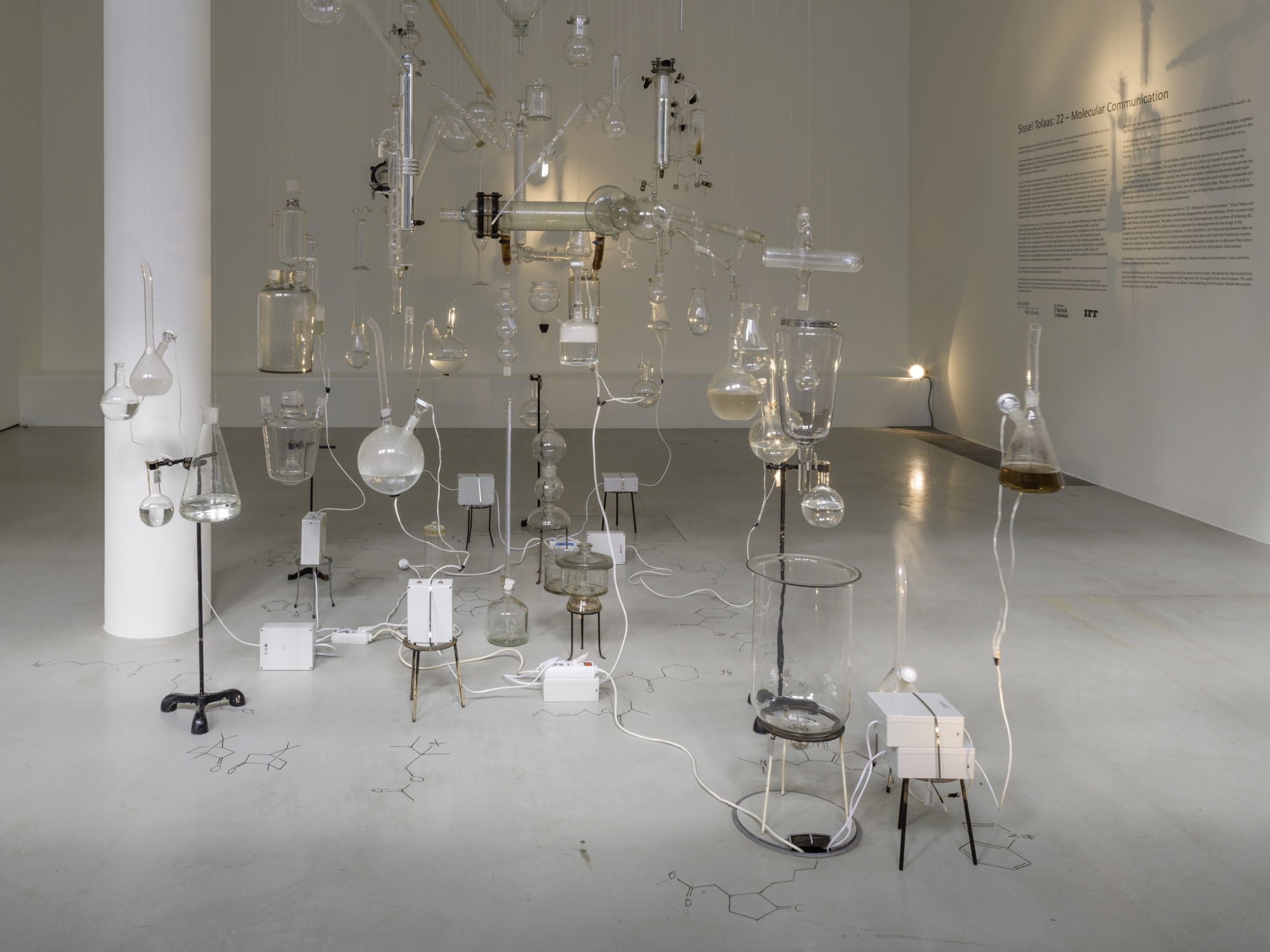 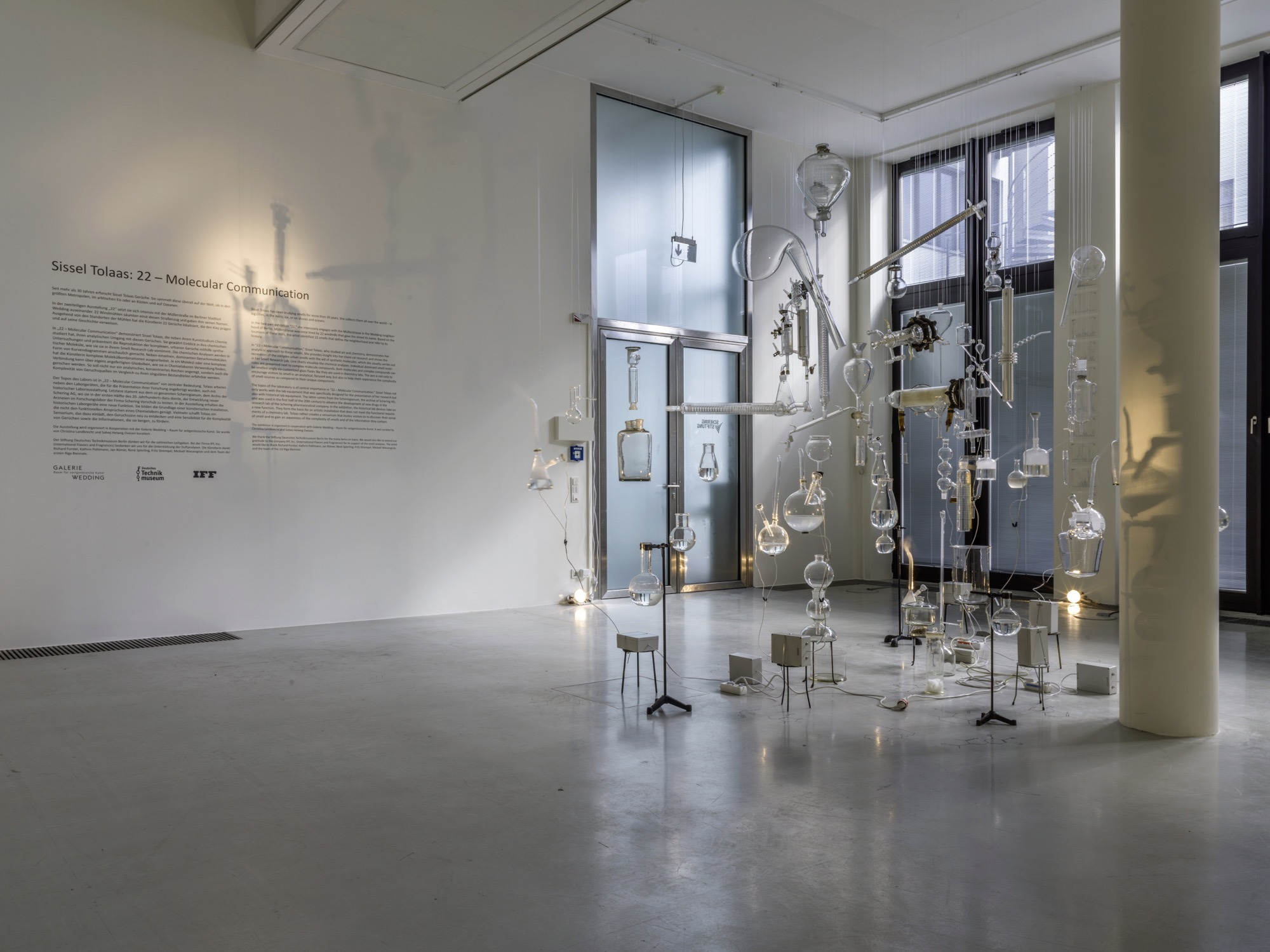 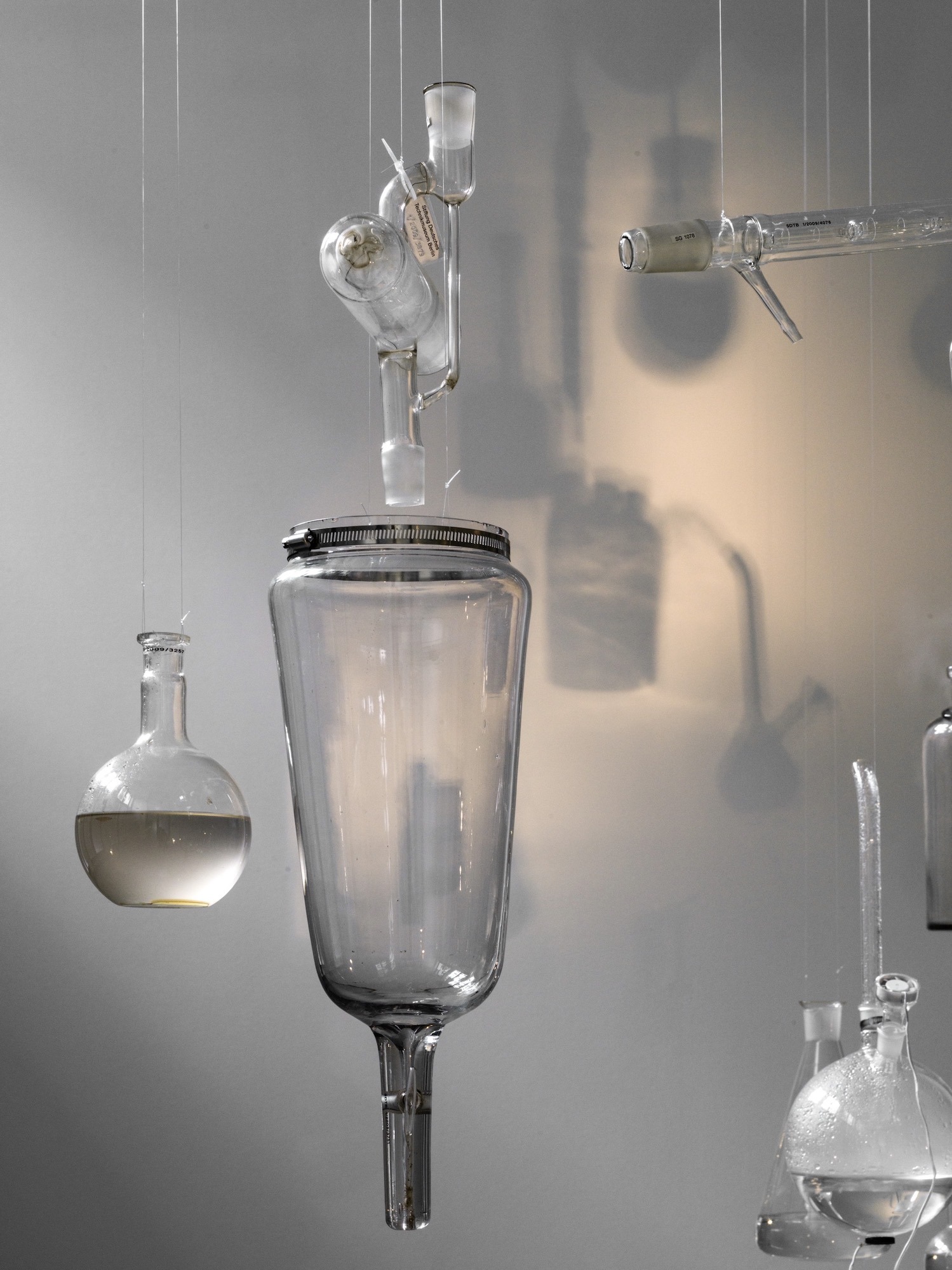 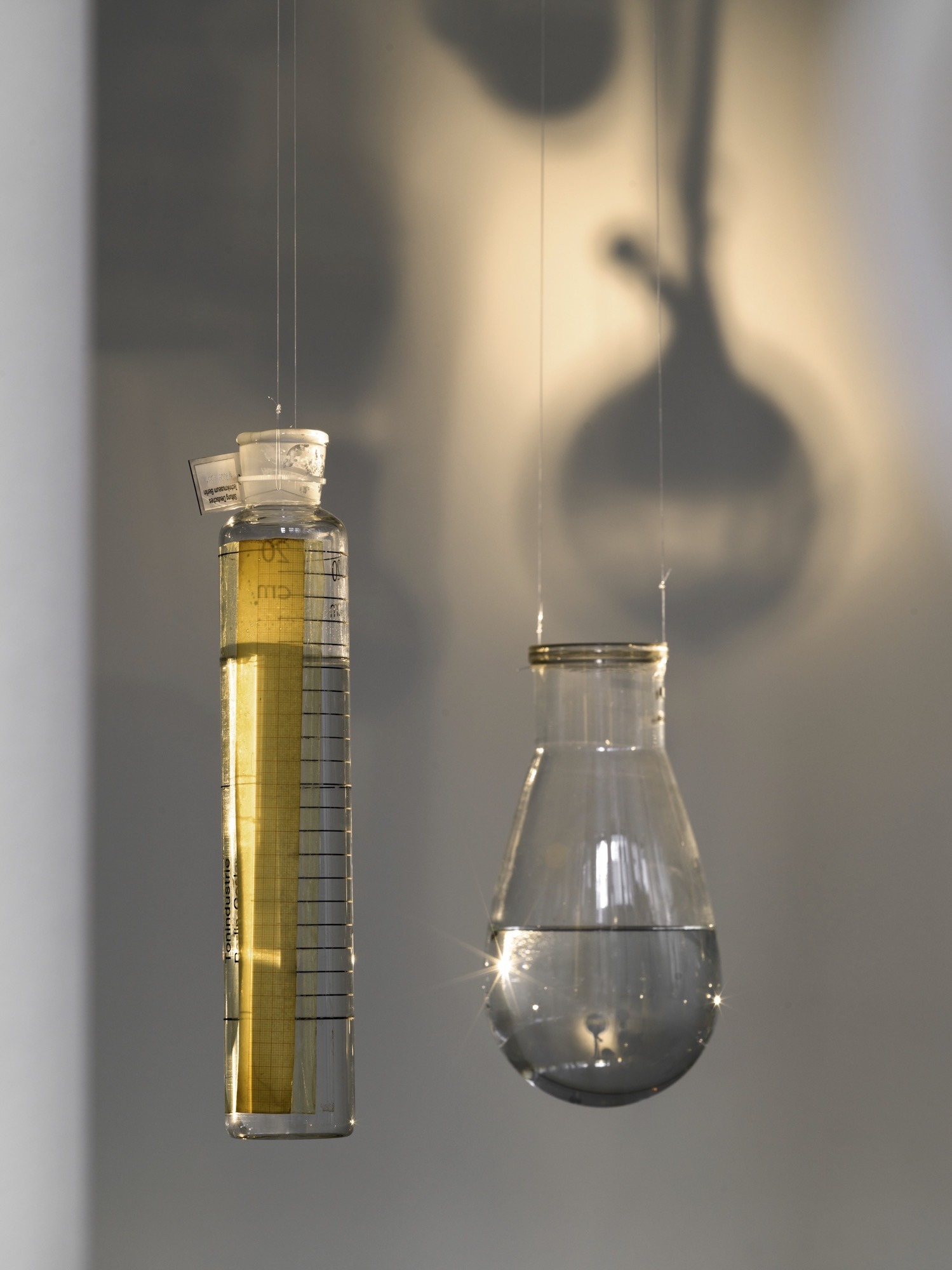 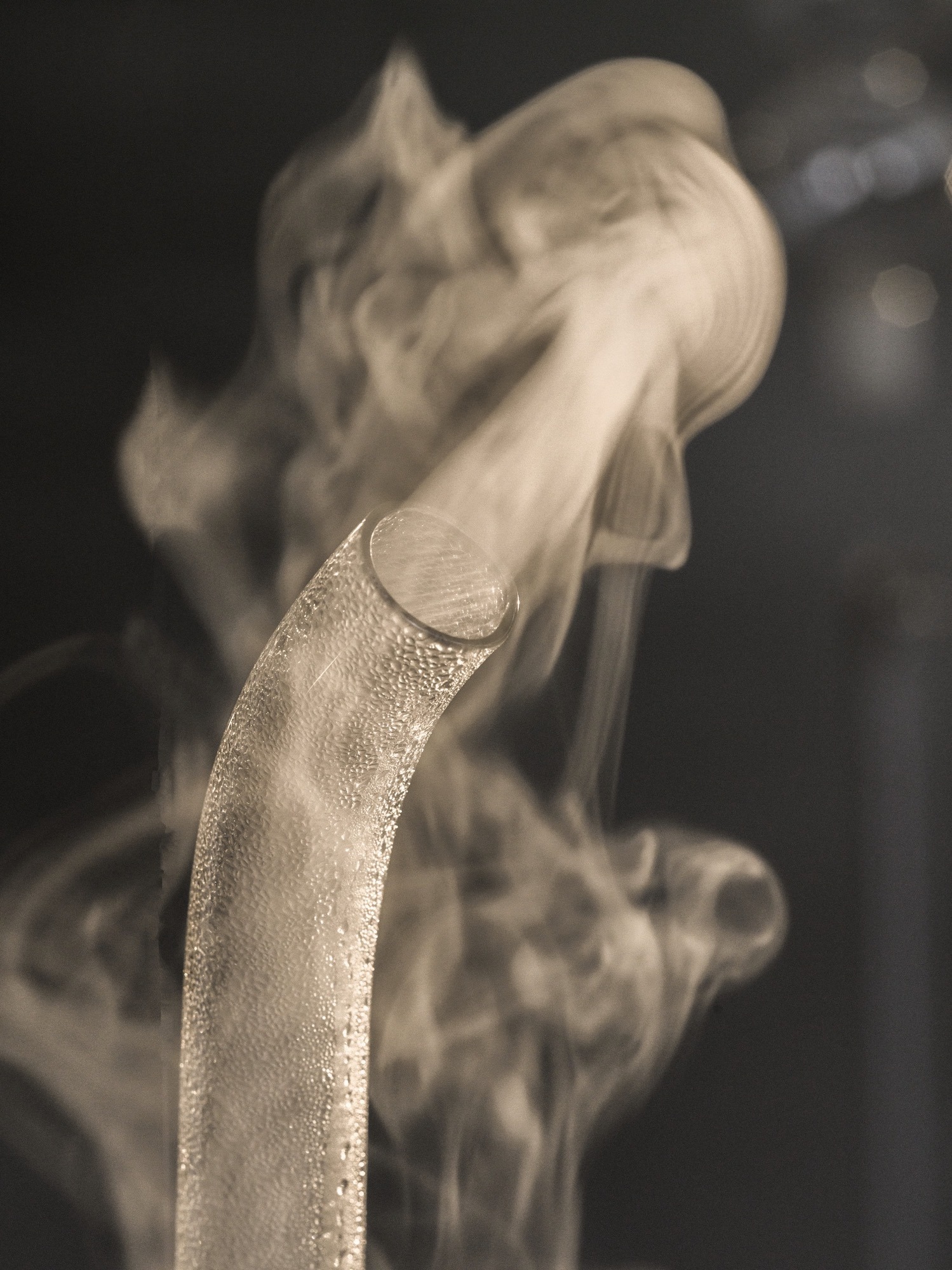 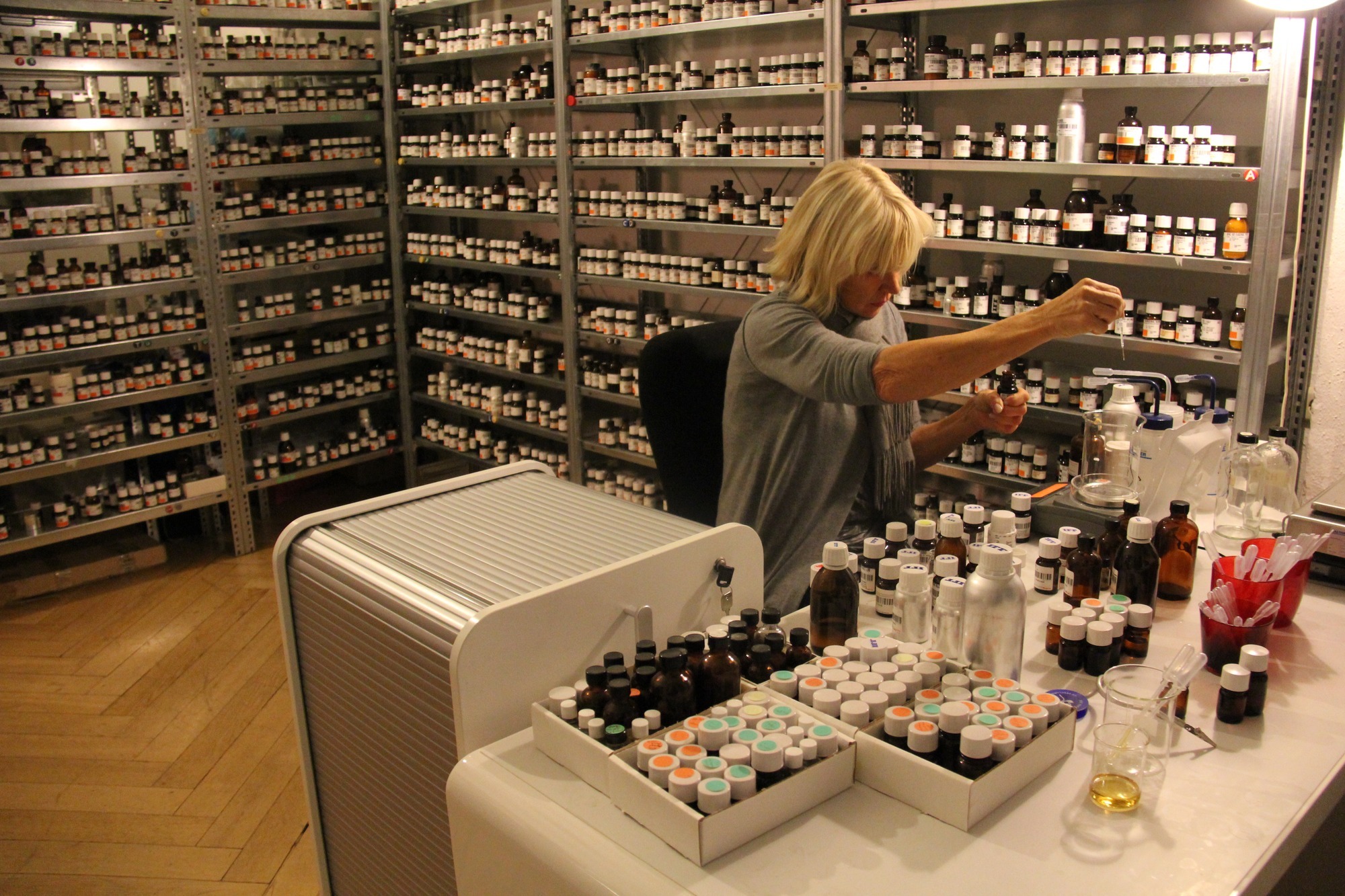 How does Berlin smell? In the exhibition “22 – Molecular Communication,” the Berlin-based Norwegian smell researcher and artist Sissel Tolaas explores the smell landscape of Mül- lerstrasse in the Wedding neighborhood of Berlin. The project, which was developed specifically for the Schering Stiftung and Galerie Wedding, is based on intensive field research. Sis- sel Tolaas has looked into the history of Müllerstrasse and identified smells that define the neighborhood. In “22 – Molecular Communication,” she presents these smells by transforming the Project Space of the Schering Stiftung into a kind of chemistry lab. Glass flasks emit vapors and encourage visitors to sniff and smell individual characteristic smell molecules or complex mole- cule compounds. At the same time, the visitors find themselves in a workspace that resembles Sissel Tolaas’ personal workplace. In her Smell Research Lab, which she founded in 2004, the artist uses synthetic molecules and her expertise in the field of chemistry to recreate real smells that she collects in metropolises around the world. So far, she has created 52 smell profiles of different cities and landscapes.

With support of the Deutsches Technikmuseum Berlin, it has been possible to assemble historical lab equipment from the 1920s until the 1960s from the former research labs of the pharma- ceutical company Schering, which form the basis of the installation. The exhibition thus also re- calls the history of Schering AG, whose flourishing research activities and administrative head- quarters could be found in Müllerstrasse until 2006.

“22” has been developed in cooperation with Galerie Wedding, where a second exhibition by Sissel Tolaas, which opens on April 18, 2019, will allow visitors to directly experience the smellscape of Müllerstrasse: with the aid of sensors located at various points along the street, the smells are delivered into the gallery space from outside and are made tangible through venti- lators in the room. Weather and wind determine what can be smelled.

Sissel Tolaas studied chemistry, art, linguistics, and mathematics in Oslo, Moscow, St. Peters- burg, and Oxford. In the 1990s, she underwent a seven-year intensive smell training, which she had developed herself. One of her first urban olfactory research projects was shown at the 3rd Berlin Biennale in 2004. For this exhibition, Tolaas systematically studied and recreated the smells of the Mitte, Kreuzberg, Neukölln, Reinickendorf, and Charlottenburg neighborhoods of Berlin. Shortly afterwards, she founded the Smell Research Lab, which is still located in Berlin- Wilmersdorf and is supported by the international company IFF (International Flavors and Fra- grances). Tolaas is at home both in science and in art. She took part in the Art & Science project “Synthetic Aesthetics,” collaborated with scientists of the Max Planck Institute for Psycholinguis- tics to develop a vocabulary to give precise verbal expression to smells, and has exhibited her work worldwide in museums and biennials, including the Riga Biennale (2018), the Museum of Modern Art (2016/2010), and the Museum Tinguely (2015).
www.scheringstiftung.de