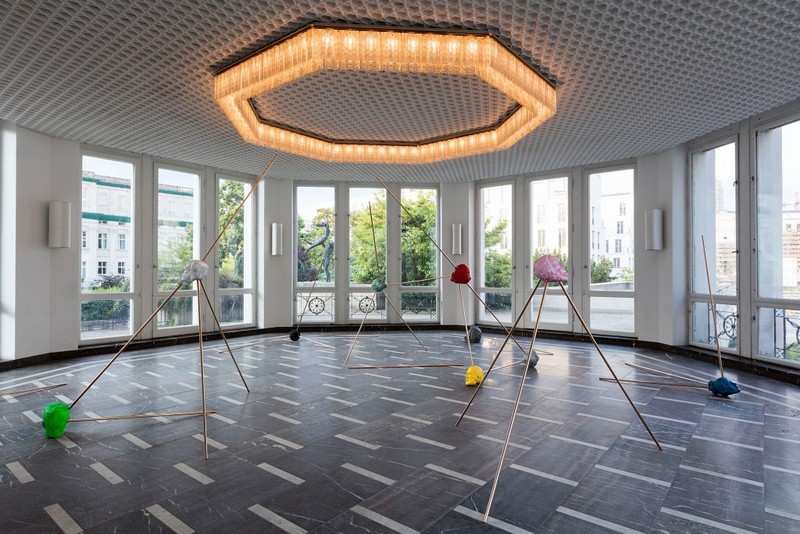 Stimulated by the foundation of the League of Nations and its affiliation, the International Institute for Intellectual Cooperation, Albert Einstein and Sigmund Freud started an epistolary exchange in 1932 about the topic of war. The conversation was based on the concept to associate two people in a free and uncensored exchange of thoughts on a topic of their choice. Einstein, who had been approached with the format alongside other scientists, academics, artists and cultural practitioners, addressed Freud with the existential question: “Is there any way of delivering mankind from the menace of war?”1

The thought exchange between Albert Einstein and Sigmund Freud became the model for Goshka Macuga’s installation “International Institute of Intellectual Co-operation“ (2016). Both thinkers are also part oft the sculptural portraits of scientists and activists in politics, biology, mathematics and philosophy, which Macuga set in a conversation through the constellation of metal poles that connect the heads recalling the shape of a molecular structure. The spatial arrangement takes its cues from the octagonal floor plan of the Schinkel Pavillon. The visions and ideas evoked through the portrayed personalities manifest as abstracts shapes in the room, nevertheless they also demand a vis-à-vis exchange between the audience and the attitude of the portrayed personality. Resultantly the cosmonaut Yuri Gagarian, the mathematician Ada Lovelace, the scientist Charles Darwin, the activist group the Guerilla Girls and the theorist Slavoj Zizek are set in a silent spatial dialog with each other. The intricate connection of thoughts, space, and knowledge draw Macuga’s installation back to the early rhetorical strategies prevailing in the antiquity and the renaissance (e.g. Robert Fludd or Giordano Bruno with reference to Ramon Llull), which as one form of the Ars memoriae (Art of memory) were practiced with the aim to situate knowledge and memory through language, architecture and images in space.

The focus of the artistic work of Goshka Macuga (*1967 in Warsaw, lives and works in London) builds the generation of knowledge through language, rhetoric and the intellectual exchange as tools for human cognisance – and consequently the organisation, maintenance, growth, and practice thereof as well as its potential loss. Especially the conquest of the human body through the development of artificial memory and artificial intelligence is a thematic, which the artist is foregrounding and opening up for discussion in her solo-exhibition in two parts at the Schinkel Pavillon in Berlin. The first part of the exhibition “Now this, is this the end...the end of the beginning or the beginning of the end? (part 1)“ discusses next to deliberations about the beginning and the end of the world also the course of time as a factor and substance in the development of science and its technologies.

For the installation “Before the Beginning and After the End, Beginning“ (2016), presented in the lower ground of the Schinkel Pavillon, the Schinkel Klause, Goshka Macuga collaborated with the artist Patrick Tresset. On a paper scroll rolled out on a long industrial table one can see biro-drawings made by a robotic arm developed by Tresset, the system entitled “Paul-n”. The drawings depict the passage of life, from planetary constellations to the creation of plants and animals and the evolution of human beings, and from there the foundation of belief systems and knowledge generation and the preservation and storage of thoughts and ideas: from the Big Bang over Adam and Eve to the now. The depictions of the concepts in the drawings stand in close correlation to the thinkers presented in the octagon above.

A selection of works by artists are shown alongside the computer-made drawings on the scroll and analogize the robotic expression with a selection of manmade artefacts. A birds nest nest by Björn Braun “Untitled (Zebrafinkennest)” (2015) or the artificial bones by David Thorpe “These are Our Bones, Grown then Cloaked” (2012) are presented in conversation with the robotic transcriptions. Jonathan Monks chain made from golden rings “Almost everything in the world is connected“ (2006) emphasizes the chain as a connecting structure – with reference to thoughts as a chain of interlinked ideas.