An Elixir of Immortality 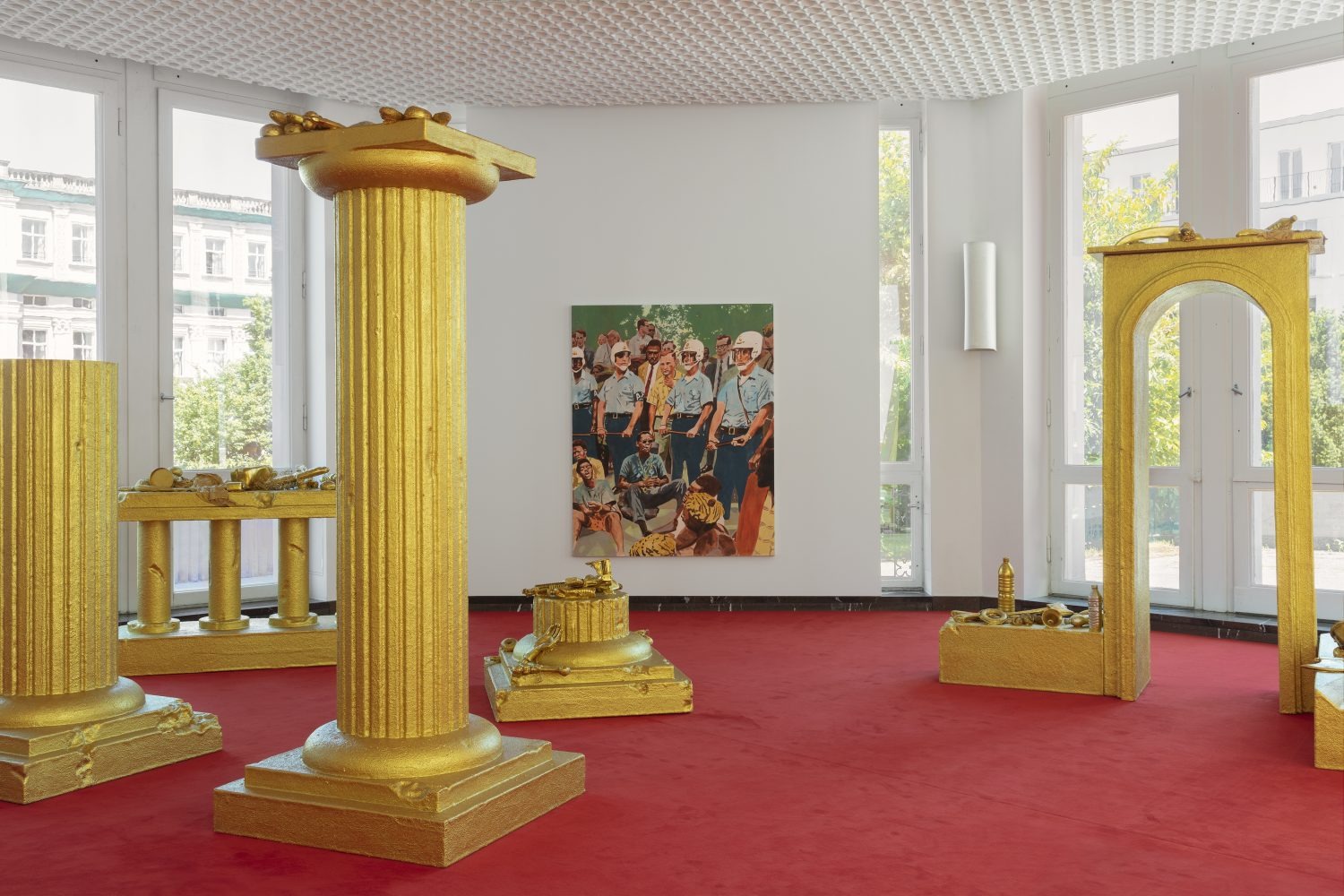 John Miller, An Elixir of Immortality, exhibition view, Schinkel Pavillon, Berlin, 2020
The Schinkel Pavillon is pleased to present An Elixir of Immortality – a long overdue Berlin survey of the work of the internationally acclaimed artist, critic and musician John Miller. This comprehensive show covers Miller’s output from the 1980s to the present, demonstrating his astute, witty, and at times poignant commentary on the notions of identity, figuration, economics, social class, and value of art.

The central element of the exhibition is an installation of monumental golden ruins Mourning for a World of Rubbish (2020), featuring a new element referencing the large granite bowl in Berlin’s Lustgarten, that in turn was based on Nero’s so-called Golden Bowl in Rome. Donated in 1828 by Kaiser Friedrich Wilhelm III, the Lustgarten bowl became a symbol of German identity since the 19th century and was later used as the backdrop for Hitler’s propagandistic speeches. The ruins, covered with debris and ‘trashy’ fake gold leaf call the self-image of the Western world into question. Presented alongside the civil rights sit-in painting, the soft porn scene, the coquettish looking nun, the devilish Batman with an erected penis, the installation becomes an ostentatious display of the potential decay of values of freedom, equality, politics, economics, and religion.

Shortly after graduating from the California Institute of the Arts in 1979, Miller began exploring artistic strategies outside the prevailing Conceptual-Minimalist paradigm – while referencing and subverting it. He questioned the artwork’s autonomy by soaking Abstract Expressionism in skepticism and tearing down the myth of artistic genius, often in uncompromising, yet humorous ways. His pseudo social-realist paintings, Middle of the Day– photographs, collages, reliefs, and sculptures covered in feces-like brown impasto or gold are emblematic of Miller’s ironic and uncompromising approach. An Elixir of Immortality manifests this aesthetic eclecticism and his abiding interest in his immediate surroundings, a sensibility which continues to influence young generations of artists in Germany, the United States, and elsewhere.
www.schinkelpavillon.de