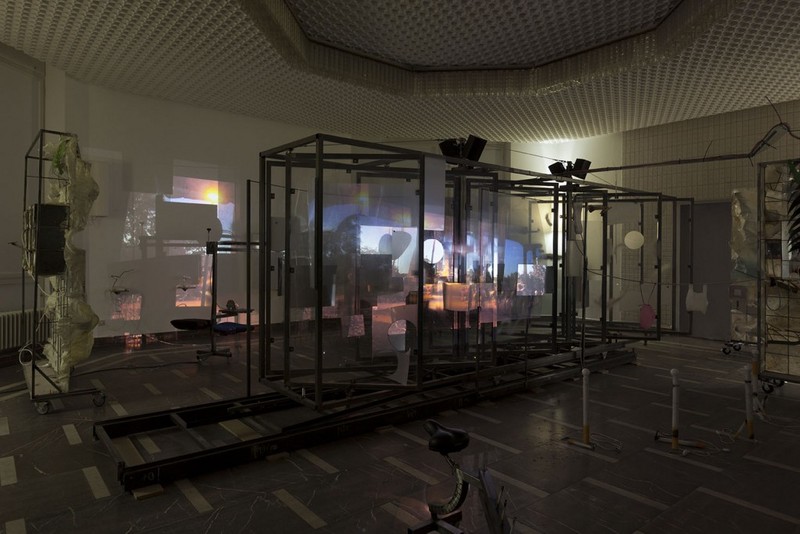 Neïl Beloufa’s work Superlatives and Resolution, People Passion, Movement and Life from 2014 is a kinetic sculpture that integrates and refracts a fragmented video onto its moving panels. As the sculpture expands and contracts along its steel tracks within the octagonal space of the Schinkel Pavillon, the video unfolds a narrative that travels across a series of staged interviews. The interviewees, everyday people of youth and health, exalt an unnamed city by describing its merits, such as the different kinds of natural waters that offer the ideal alchemy for recreational sports. The interviews outline a sort of 21st century mythology of a utopia with an ideal work-life balance structured around power naps. Including a dislocated Nico singing about All Tomorrow’s Parties in the background.

Beloufa has described the status of a work of art as an intermediary object – within its relationship to space and viewer, but in this case also as sculpture as well as projection surface. The viewer’s approach is necessarily one of a negotiation between figure and ground, without knowing which part to prioritise, assuming that these two fields could be clearly identified. While the video footage sports the gleam of a hyper-simulated HD-file in bubble-gum wrapping, the sculptural components of Beloufa’s work exhibit a strong handmade, studio-based aesthetic with rough cuts of cheap materials attached to the heavy metal framework. The autonomy of this material and aesthetic endeavour contrasts any notion of a smooth and seamless professionalisation of sculptural production.

Diffracted, rejected, deflected across the multiple Plexiglas screen layers, the RGB light from the projector is forced into a clumsy form of a home-made hologram that nonetheless fascinates and magnetises. Although Beloufa’s work can be viewed in the context of a tradition of Expanded Cinema and experimental filmmaking, its formal materiality develops a potency that does not seem to be derivative in any sense. Neither does the trope of fictionalised documentary enter the realm of cynical commentary. Instead, even the evocation of something as disturbing as the word “lifestyle” seems to resonate with a sincere fascination with ideas of modernism as well as ancient tropes of good living.

For the glass octagon of the Schinkel Pavillon, Beloufa has also constructed a series of sculptural works that frame the space at its borders and thereby extend the expanded sculptural realm to envelop the viewer gazing into and out of the bubble. As visitors we become liminal parts of Beloufa’s twinkling utopia in its etymological sense: as non-place.