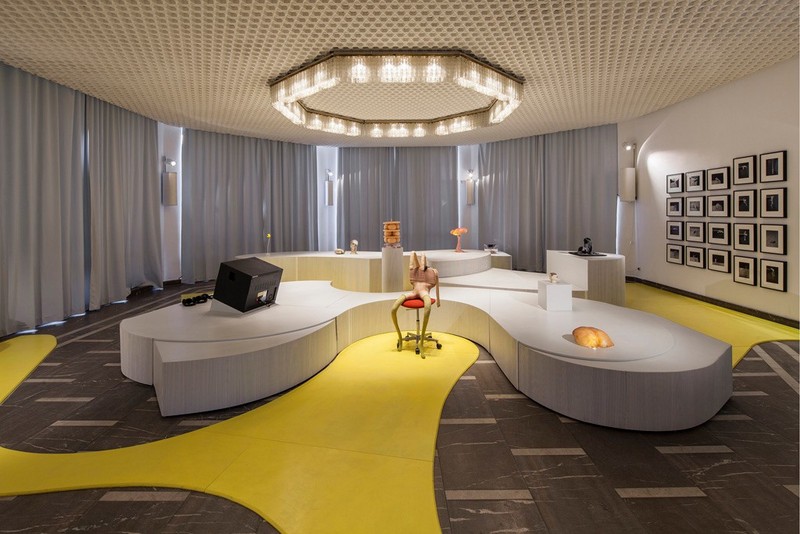 THEM – that’s them, that’s us. THEM revolves around questions of the self, encompassing the gaze inward and outward, and of representation and self-definition. THEM involves the sensuous, the body and material, desire and rebellion, spaces of intimacy and the abyss, delimitation, technology, the virtual. The group exhibition THEM is an encounter, a revision, a statement. The central reference point of the exhibition is the work of Polish artist Alina Szapocznikow (1926-1973), which has gained international recognition in recent years. Szapocznikow’s works partake in a dialogue with six artists, exclusively female positions, which deal – each one specifically in relation to their generation – with the definition and construction of the body, with gender, with social positioning, and even the prosthetic-ness of the body in the digital era. The exhibits are framed by an architecture specially conceived for the exhibition that in its overall appearance resembles an amoeba, a single cell organism, and which as an independent body carries and encloses the sculptures. It becomes an organically sinuous, walk-through interface, a body that addresses the corporeal.

The juxtaposition of the aesthetic of the surface with the substance of matter is a recurring theme in the sculptural work of Alina Szapocznikow. Cendrier de célibataire (The Bachelor’s Ashtray I) (1972) depicts such a dichotomy between the real and the absurd. There is form and the formless, the casting of a head and its surrealistic extension, the immaculate, the pictorial and the moment of transition, a disintegration and dissolution. Existentialism and irony, awareness, and the pleasure of the body. ‘My gesture is addressed to the human body, that “entirely erogenous zone”’, wrote the artist in 1972. ‘Through casts of the body I try to fix the fleeting moments of life, its paradoxes and absurdity in transparent polyester.’1

Alina Szapocznikow’s works play with states of being, with presence, absence and becoming. In her sculptural work she focuses strongly on the partial, on individual parts, on traces of the body, its contours, its disappearance. She created an ‘alphabet of the body’,2 giving shape to objectuality through personal references such as casts from her body. The biographical is essential in Szapocznikow’s work: as a youth she survived the concentration camps of the Third Reich. After her artistic studies in Prague and Paris, she was primarily active in the Paris of the 1960s in the Nouveau Réalisme movement, in which she asserted herself with a feminist attitude. Here she focused on working with new, industrial materials like polyester, polyurethane foam and synthetic resin, from which evolved the greater part of her work of the 1960s and 1970s. The body cast as negative form, doubling, a seriality between production and reproduction become thus also fundamental in her lamps with casts of mouths, buttocks and breasts. Remoulds of sexual organs in bright colors determine a surrealistic eroticism like in Sculpture-Lampe (1970) that is at the same time furniture, sketching gender roles and containing within it a commodity fetishism in the style of pop art. Modelling through and with the body attains a new level in Szapocznikow’s Photosculptures (1971)3, as shown by twenty photographs of chewing gum sculptures, amorphous entities with tooth marks, which the artist photographed on traditional sculptural materials (that she once used as well), like stone. The multiple malleability of material with varying form which Alina Szapocznikow demonstrated with this series can in this way be seen as symbolic of her work and attitude: giving shape to the ephemerality in the moment now, while turning towards what is to come.

Conceptions of sexual roles are also a recurring theme in the work of Sarah Lucas (*1962). The sculpture Bunny Gets Snookered #3 (1997) addresses the female body as object in the form of furniture, very similarly to how Szapocznikow did this with her lamps modelled on body parts. Lucas’ sculpture – a doll made from nylon stockings, its body physically connected to a desk chair and surrounded by phallus-like sausages – expresses aspects of morality, sexual dominance and submission as well as the ambivalence of sociosexual conventions.

In the younger positions, changeability between material, object and body finds, from a digital perspective, completely new formal configurations: but the ways of handling new technologies are similar to Alina Szapocznikow’s form finding process. Comparing the exhibits makes clear how up-to-date Alina Szapocznikow’s works are, especially today in the so-called ‘post internet’ epoch.

The work Grapeshot (2015) by Alisa Baremboym (*1982) was recently a part of an installation in the exhibition Conflict (process) at 47 Canal in New York City, with the form of this work – ovary-like globes within hybrid support structures – as a recurring motif of the respective elements. “Conflicting materialities are a process of perception, and the process is the site of production”, the artist writes on her website. Conflict, recognition and power here relate to the female body: how bodies, self-conception and action formulate and position themselves differently by referencing back to (new) materials and chemical-industrial production, is object, statement, and question in Alisa Baremboym’s work.

The digital body is a reference point in the work of Aleksandra Domanović (*1981). Her sculpture series SOHO (Substances of Human Origin) (2015) references the so-called ‘Belgrade hand’, a multifunctional, externally powered, cybernetic hand developed in the early 1960s. This prototype is the template for the sculptures presented in THEM. Here however, in a reference to organs, tissues and cells for transplantation and assisted reproduction, the prosthetic limbs have mutated and metastasised, taking on an entirely different life. Bodies appear in Domanović’s work as concepts: she emphasizes the corporeal as fragment and prosthesis, as tool and avatar, as image in space, as internet excerpt. Her researches include the significance of women in the development of the internet, cybernetics, virtual reality, and multimedia.

The digital image in space as construction is also the starting point for the work of Katja Novitskova (*1984). The sculpture Approximation (Snail) (2014) is part of an ongoing series in which Novitskova places larger than life cut-outs of animal pictures as props within the exhibition space. The display becomes an interface between digital and physical pictorial reality, her Approximations serving often as templates for further optically deceptive, photographic stagings of her public – as the reality of simultaneity.4 Her work exhibited in THEM implies a feminist gesture: a female hand holds a rearing snail provocatively but yet nonchalantly – like a revolver – into the space it opens up.

The works by Anicka Yi (*1971) mostly relate to smell as a conceptual component and indicator between humans, body and space. With her sculpture 235,681K of Digital Spit (2010) she addresses the ambiguity of the handbag as a cultural medium: the transparent Longchamp bag is filled with hair gel and a cow intestine. Between representation and repulsion it becomes a phantom of consumption and the beauty industry, a vulgar antagonist of female clichés.

3 Originally accompanied by a text that describes her method – and underlines the conceptual component of the work.

4 Katja Novitskova also deals with this in her book “Post Internet Survival Guide”, 2010: “As everything is simultaneously realistic and camouflaged, the skill needed to navigate the space meaningfully is to be fluent in image-editing effects.”
www.schinkelpavillon.de