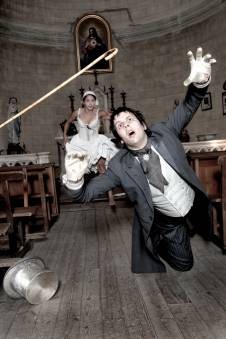 John Bock is primarily known for his spectacular, comic-grotesque actions, in which theater, lectures, video, installation, and sculpture are intertwined. In recent years, video has moved into the foreground of his media and separated from the performances. From the first, rapid cuts in the short videos of his actions Bock has recently moved to clearly longer and more narrative films, in which he works with actors and uses real backdrops that he infiltrates with his own universe. As in his live appearances, here too he celebrates a colorful world that is as profound as it is absurd, permeated by countless biographical, artistic, and scientific connections but that nevertheless defies rational interpretation. This exhibition is the first to concentrate on John Bock’s genuinely cinematic works and also offers a new film production created especially for the show.