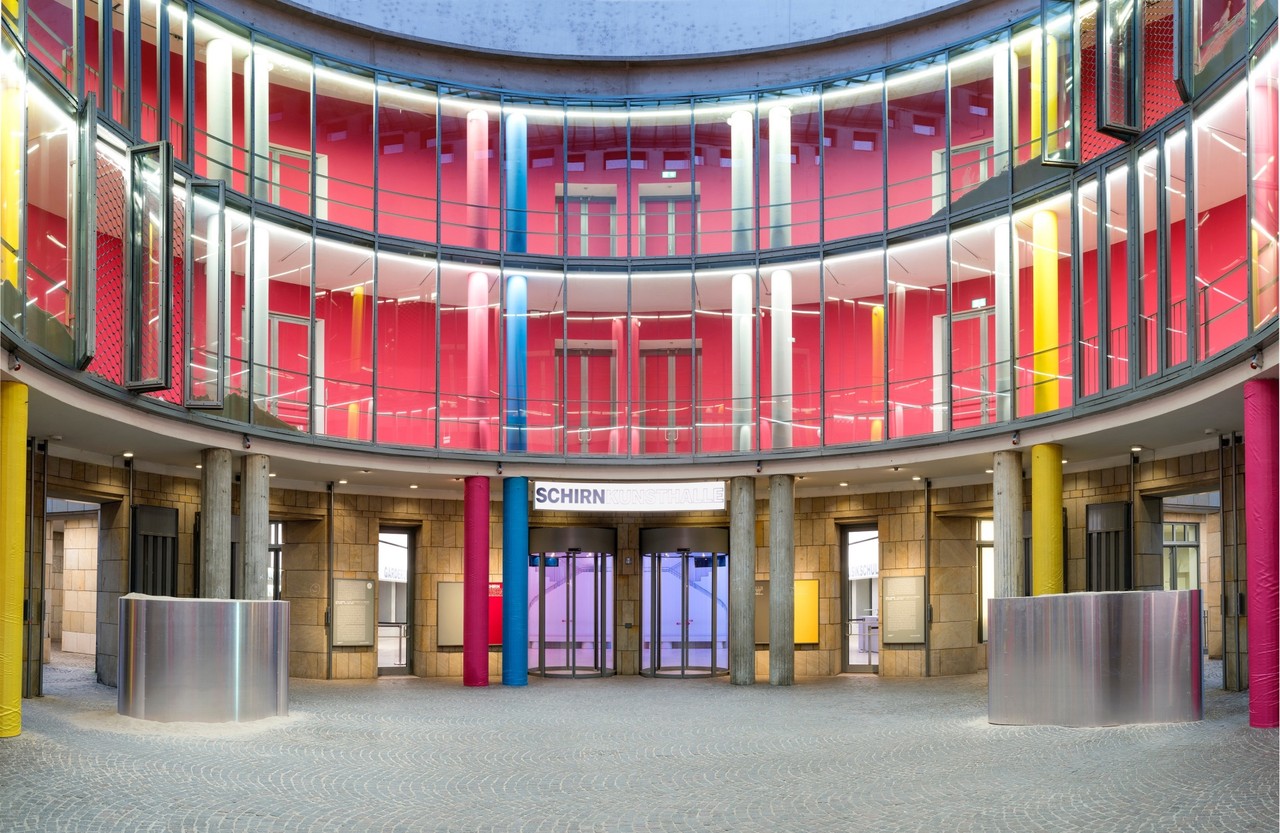 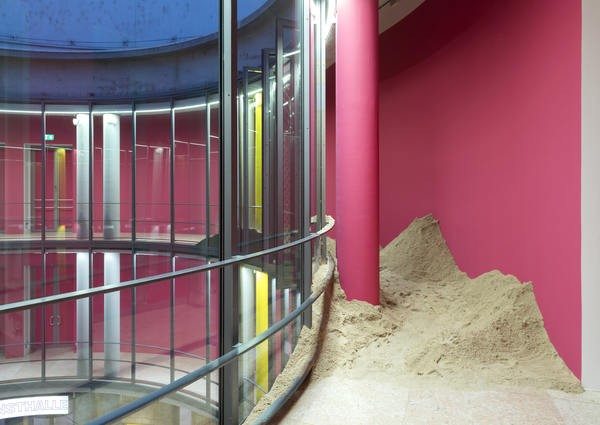 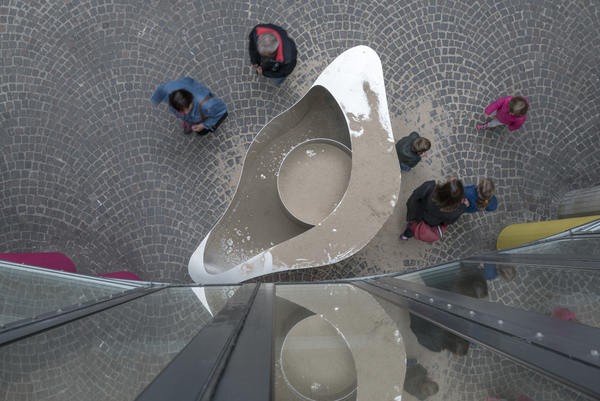 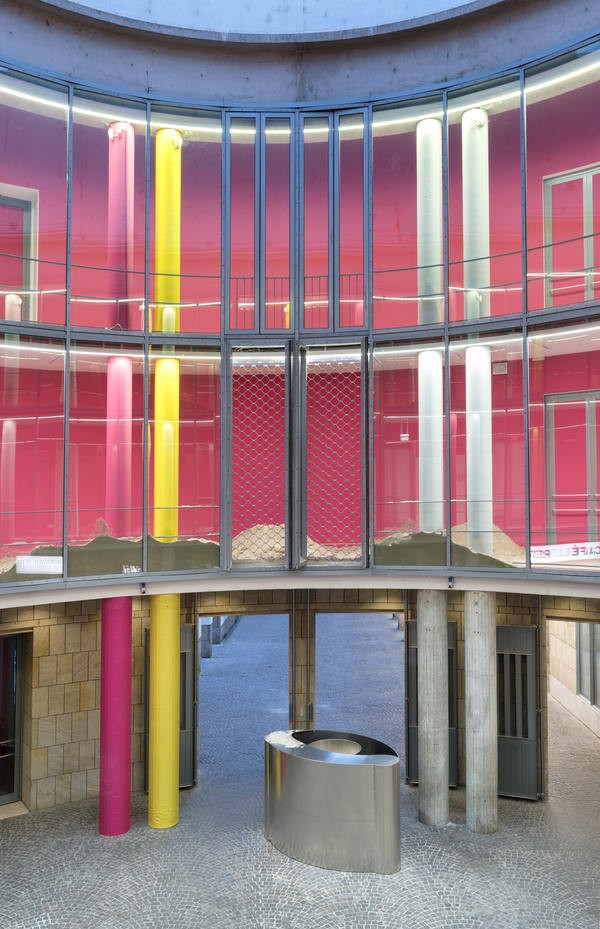 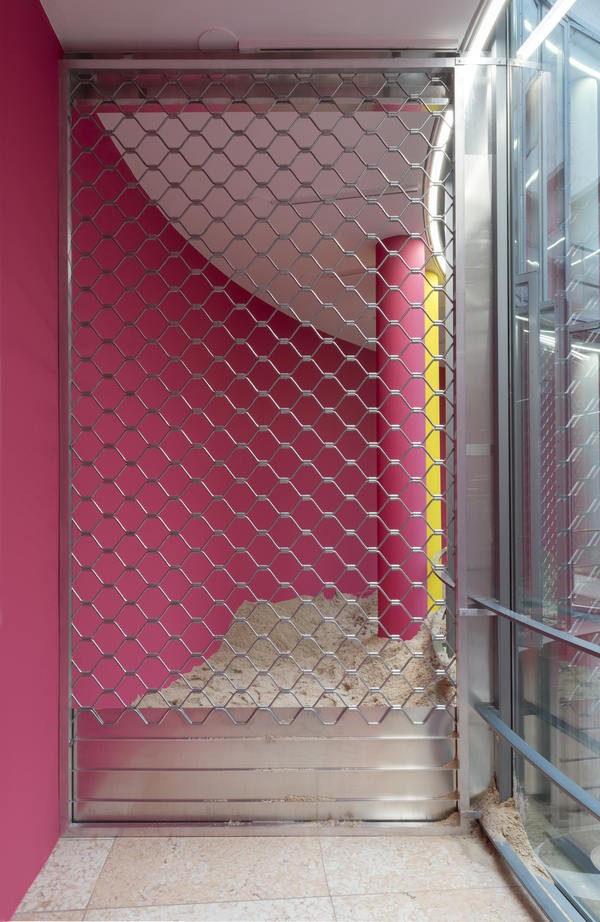 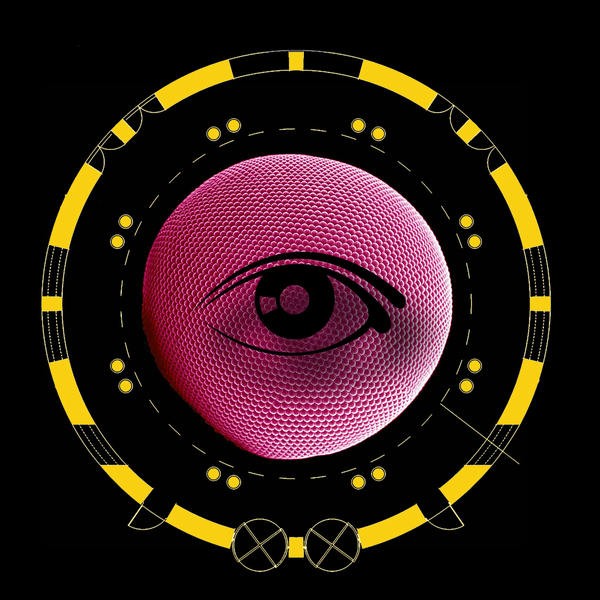 From April 28 to July 30, 2017, the Schirn Kunsthalle Frankfurt is presenting a spatial sculpture by the artist Lena Henke. In the work specially created for the Schirn Rotunda entitled Schrei mich nicht an, Krieger! (Don’t Shout at Me, Warrior!), the sculptor reacts to the specific conditions of this freely accessible public space. Henke sees the Rotunda as a space in which interior and exterior merge in a very distinct way—as the entrance to the Schirn, as an exhibition space, and as an element of urban architecture between the Cathedral and the Römer. In her installation Henke concentrates on this ambivalent capacity of the space, thereby creating an awareness of the unique character of the location. In the two opposing entrances to the Rotunda, the artist positions two aluminium sculptures that are open at the top and filled with sand. It is not clear at first how this sand came to be in and on top of the objects. Henke guides the viewer’s gaze through a system of colors, which accentuates the architecture upwards to the open windows of the circular galleries surrounding the Rotunda. There sand is also placed and trickles outwards and into the sculptures through coarse-meshed metal rolling grills. The visitors can stroll round the galleries and walk through the sand, hence influencing the circulation as well. At the same time, from up there the form of the objects in the Rotunda becomes visible: they are two oversized eyes. The association of sand in the eye—an unpleasant feeling involving discomfort and pain—suggests itself. In her works, the artist combines topics such as architecture, public space, and urban planning with subjective experiences. Her starting material is the site as she encounters it; she heightens it and stages it in a perceivable way. Thus Henke transforms the Schirn Rotunda into a walkable and constantly changing spatial sculpture in which inside and outside merge. In her formal language and her use of materials she makes deliberate references, in particular to modern and recent art history, bringing together Surrealism and Minimal Art. By consciously investigating traditional artistic strategies and aesthetic concepts, Henke creates new visual experiences and contexts of meaning. The change of perspective is an important element in her works and essential for the insight into things and into life itself. Her works can be read as a self-confident statement of contemporary art, which is given additional expression in the powerful title of her work for the Schirn.

The exhibition “Lena Henke. Schrei mich nicht an, Krieger! (Don’t Shout at Me, Warrior!)” is supported
by the SCHIRN ZEITGENOSSEN.

“The Schirn’s Rotunda is a very special place. It is open to the public and serves as an exhibition space, meeting place, and at the same time an important architectural element linking together the historic city center. Lena Henke understands how to rethink this space with its multiple capacities and specific characteristics. She has created a holistic, walkable spatial sculpture that dissolves the boundaries between inside and outside and hones our view of this place,” observes Dr. Philipp Demandt, Director of Schirn Kunsthalle Frankfurt, about the installation.

Katharina Dohm, the curator of the exhibition, comments on the artist: “Lena Henke examines the systems and structures of urban life in her complex spatial sculptures. As a sculptor she uses space as both material and framework, heightening and staging it. She develops her own formal language from her study of theories and aesthetic strategies of modern and recent art history. The remarkable features of her works in public space lie in their continuous transformation as well as the active influence of surroundings and viewer on the installation.”

The way she treats material and colors plays a major role in Henke’s sculptures and installations. Henke already focused on the qualities of sand, for example, in early works such as the series female fatigue (2015) and the work Die (2014). As a sculptor she is aware of the fundamental importance of sand as a basic substance for the casting of sculptures. In Schrei mich nicht an, Krieger! (Don’t Shout at Me, Warrior!), she highlights the contrasting features of the material: the mass of sand, which hampers visitors’ passage through the walkways of the Schirn Rotunda, but also its lightness, since it is always in motion due to the air circulation. The participation of the visitors and the climatic conditions not only change the material, but also gradually alter the spatial sculpture as a whole. The sand is the crucial irritating element and at the same time is allegorically charged: it stands for impermanence, for the passage of time. The smooth, cool aluminum from which Henke fashioned the eyes is another important material in her work. The sand, which absorbs the light, forms a contrast to the silver reflections of the aluminum. The artist tosses sand in our eyes: this interaction of disparate materials, qualities, and associated experiences is both disrupting and disquieting. Henke’s use of colors results from her intense study of the architecture of sculpture gardens, light and color concepts, for which she recently travelled to Mexico, among other places, for research purposes. There she came across the buildings by the architects Luis Barragán and Mathias Goeritz, whose characteristic color design in pink, blue, and yellow is reflected in the Rotunda.

Lena Henke (*1982 in Warburg) lives and works in New York and Frankfurt am Main. She studied from 2004 to 2010 with Michael Krebber at the Städelschule in Frankfurt am Main. Her sculptures and installations have been shown internationally in numerous solo exhibitions, including at the Kunstverein Braunschweig (2016), the S.A.L.T.S., Basel (2016), and the Kunstverein Aachen (2012). In 2016 she was represented both at the 9th Berlin Biennale and at the Montreal Biennale, and the previous year her works were to be seen at the New Museum Triennale in New York. Henke has also participated in group exhibitions, for example at the Socrates Sculpture Park, New York (2015), at the Kunsthalle Bern (2014), at the Künstlerhaus Graz (2014), and at the Institute of Contemporary Art, Miami (2013). Her design for the work Ascent of a Woman is currently shortlisted for the “High Line Plinth” in New York.

The exhibition has been made possible by the SCHIRN ZEITGENOSSEN, a circle of young patrons of contemporary art at the Schirn Kunsthalle Frankfurt. The Schirn wishes to thank Jan Bauer and Lena Wallenhorst, Andrea and Andreas Fendel, Lilia and Hartmuth Jung, Sunhild Theuerkauf-Lukic and Andreas Lukic, Shahpar and Stefan Oschmann, Vasiliki Basia and Jörg Rockenhäuser, as well as Katharina and Lars Singbartl for their commitment.