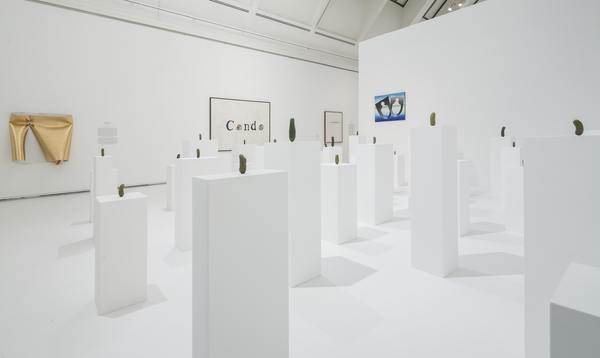 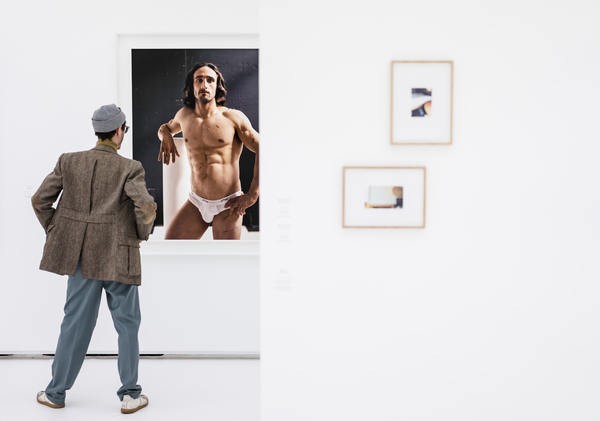 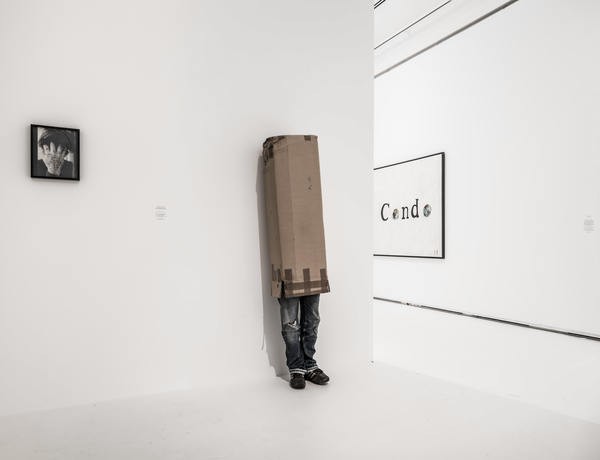 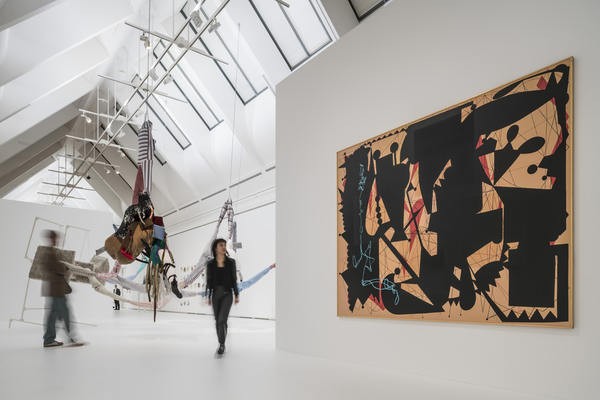 The Schirn Kunsthalle Frankfurt is presenting self-portraits by contemporary artists in the thematic exhibition “ME” from March 10 to May 29, 2016. The show features 40 international positions in painting, photography, video, sculpture, and performance art, including works by artists such as John Bock, Eberhard Havekost, Alicja Kwade, Mark Leckey, Nam June Paik, Pamela Rosenkranz, Rosemarie Trockel, and Erwin Wurm.

What does one expect from a picture that is supposed to be a self-portrait? Strictly speaking, the ingredients are clear-cut. They have been tried and tested for centuries. Artists explore their faces in the mirror and render this experience in a portrait. The modern era spawned countless self-portraitists from whom nothing less than naked self-affirmation was to be expected in their exploration of their self. And today? Artists no longer show their faces to the viewer. They leave self-revelation behind, retreat from view, pursue less direct approaches—and distance themselves from their own self. We often only know that these are self-portraits because the titles tell us so: Imi Knoebel presents a collection of utensils as a Selbstporträt mit Pappkarton, and Gabriel Kuri a combination of insulating material and a shell. Abraham Cruzvillegas renders personal documents unreadable by overpainting them and calls it a “blind self-portrait,” while instead of portraits, Ryan Gander shows the palettes he allegedly used to paint them. Günther Förg portrays himself descending a stairway without a head, Wolfgang Tillmans shows only his knee, Pawel Althamer nothing but his clothes. Michael Sailstorfer writes his name in uppercase letters, Sarah Lucas nearly kicks the viewer in the face, and Florian Meisenberg lets us take part in his life via smartphone livestream. These contemporary self-portraits are ironic, experimental, and
deconstructive. The times in which the artist could place himself without irony at the center of attention in a picture are evidently over. And the general conditions governing the production of such portraits have undergone sweeping changes. For the first time in the long chain of tradition, the self-portrait has gained a broad foothold as an everyday cultural technique and become accessible to everyone. Thus as an exclusive product of artistic subjectivity, it is now history. Self-portraiture without the self, portraits without faces, a crisis
of representation—the self-portrait has bid farewell to the illusion of reality. Mimesis is avoided, the outer surface concealed. “ME” traces the iconoclasts of the self on their quest for a contemporary form of self-portraiture.

The exhibition “ME” at the Schirn Kunsthalle Frankfurt is funded by the German Federal Cultural Foundation and the Kulturfonds Frankfurt RheinMain within the framework of “Transit” (2015–17), its current theme-based project.

“We can safely say today that staged self-presentation has become a mass phenomenon of a culture devoted to making impressions. Artists have responded by developing unorthodox, experimental, and humorous strategies for the purpose of questioning the ubiquity and overcoding of the human image in our media society. In “ME” they confront us with the mirror. The exhibition takes up the question of the role of staging the self first addressed in the highly acclaimed show “PRIVACY” presented in 2012. Thus the exhibition offers visitors yet another opportunity for critical reflection on their own relationship to the media,” notes Max Hollein, Director of the Schirn Kunsthalle Frankfurt.

As Dr. Martina Weinhart, curator of the exhibition, explains: “Solidly supported by various philosophical and sociological theories and developments dating back to the sixties and seventies, today most artists still have serious doubts about the representability of the self. The consequences are evident: multiple selves, fractal subjects, nomadic thinking without a subject, difference, fissure, and scattering of the subject in language. Above all, these complex thoughts block convenient avenues of access to self-representation, such as the quest for privacy, autobiography, or psychobiography. All of this shakes the tradition-laden genre of the self-portrait to its foundations.”

The traditional self-portrait is now a thing of the past. The customary features of a classic self-portrait are for the most part lacking entirely. We have known for some time that the human being is no longer master in his own house. Doubts about the amenability of the subject to depiction were expressed (at the latest) by the French post-Structuralist philosophers. With their theories regarding the disappearance of humankind and the death of the author, Michel Foucault and Roland Barthes radically rejected modern concepts of subjectivity, artistic authorship, and originality. Jacques Derrida described the self-portrait as a ruin in which blindness has always been inscribed. These qualities are no longer compatible with the conventional definition of the self-portrait. Moreover, the political upheaval of the sixties and its attacks on encrusted structures and hierarchies left no room for the princes of oil painting. In retrospect, this period proved to be the germinal cell for contemporary practices. It led to the demystification of the artist as creator. The sixties also witnessed the emergence of a uniquely experimental approach to the self. On the one hand, attacks on the modern cult of genius led to artistic strategies such as compilation, serial production, and reproduction, which took the artist out of the line of fire. On the other hand, new possibilities were explored extensively in body and performance art, thereby extending the range of possibilities for self-depiction. Expressive approaches gave way to conceptual
constructs, which focused above all on the conditions affecting the genre. That in turn led to the paradoxical situation in which the self-portrait was revived by virtue of its refutation. This is illustrated in the exhibition by works such as Brustwerk (1973) by Friederike Pezold, Filzanzug (1973) by Joseph Beuys, and Centers (1971) by Vito Acconci, all of which originated in this field of tension.

Another key element of the self-portrait has now come under suspicion: the face. Until now, it has always served as a privileged medium of human expression, as its surface appearance alternated between truth and deceit, revelation and concealment. Here as well, the picture we see is loaded with contradictions. The mass media have unleashed a visual tidal wave of faces, prompting Thomas Macho’s observation that we now live in a “facial society.” Yet the face has been devalued in the process. Its credibility is challenged by phenomena such as Photoshop and morphing as well as cosmetic surgery, the possibilities offered by genetic engineering, and digital facial recognition technology. The face has become a political entity.

Once the focal point of self-portraiture in modern art, we encounter the human being as a marginal phenomenon even in contemporary photographic self-portraits. Photography ultimately plays a key role in this context. Liberation from mimesis in painting occurred at the precise moment at which photography appeared on the scene. Now, photography is liberating itself from mimesis. Decentralization, blindness, and obstruction are the consequences. It is striking to note how many contemporary artists’ photographic selfportraits are fragmented or headless. Eberhard Havekost, for example, does not show his face in his series entitled Hotel (2003), presenting only images of other parts of his body, such as a foot. Wolfgang Tillmans chooses a virtually indecipherable perspective. We see only the legs or the neck of the young Korean artist Jun Ahn. Mark Leckey, recipient of the Turner Prize, takes advantage of very recent advances in technology when he transposes
his portrait photograph into a fragmented sculpture with the aid of a 3-D printer. Yet at the same time, his hyperrealist Leckey Legs (2014) seem prop-like, paradoxically almost bodiless, and the head is missing entirely. And it appears to be totally consistent with these trends when the American artist Jack Pierson has others represent him in his series of selfportraits from 2003 and completely disappears from the picture.

In step with technological advances, science is continually developing new imaging techniques within the context of the quest for deeper insights into human beings: fingerprinting, X-rays, endoscopy, iris recognition, and electroencephalography. Fascinated by these new possibilities, visual artists engage in a dialogue with these scientific and technical imaging methods. The works exhibited at the Schirn reconstruct the history of this process from the sixties to the present. Robert Morris’s Brain Portrait (1963) is an electroencephalogram (EEG) of his own brain. For his Prosecuritas series, Jürgen Klauke laid down in an X-ray machine used to examine baggage at airports. In the resulting image entitled Toter Fotograf (1988/93) the artist is recognizable only by virtue of his shoes. Alicja Kwade’s Selbstporträt (2015) consists of twenty-two vials containing the chemical elements of which the human organism is composed. And in Attraction (Red and Blue) (2014), Pamela Rosenkranz processes recently discovered scientific evidence that a complex community of microbes, parasites, and viruses is responsible for neuroactive effects that influence how people think and feel. In this way, she reveals processes that expose the illusory character of simple concepts of the self.

The exhibition “ME” at the Schirn presents a comprehensive overview of the iconoclastic processes to which the genre of the self-portrait is subject today, along with relevant subversive techniques in art, including humor, irony, decentralization, fragmentation, blindness, and obstruction. However—or perhaps precisely for that reason—the artistsubject has remained a leitmotif in contemporary art, although it is no longer associated
exclusively with the image of the artist. The subject is a constantly changing phenomenon and thus difficult to grasp in a portrait. The self is experimentally evacuated. All that is left are fleeting encounters.