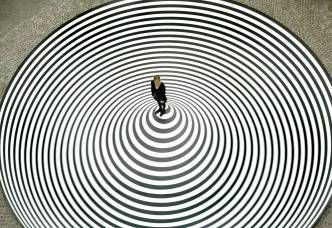 In the early 1960s, Op Art and kinetic art showed a strong interest in objectivity and in scientific experiment. Fascinated by the physical laws of light and optics, a whole generation dedicated itself to the study of visual phenomena and principles of perception. Plumbing the possibilities of optical illusion, artists like Victor Vasarely, Bridget Riley, François Morellet, Julio Le Parc, and Gianni Colombo deliberately sought to perplex. Their large-format paintings, objects, and environments do not, however, simply set the viewer’s eye in motion. They also cause the viewers to be immersed in color, plunge them into the infinite in mirrors, or offer them poetic games with light. The interaction between the work and the viewer climaxed in installations that not only unfolded physical effects in the form of afterimages, vibrating colors, or the flickering of light but affected the entire consciousness.