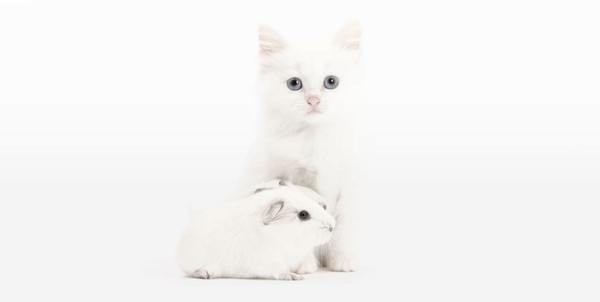 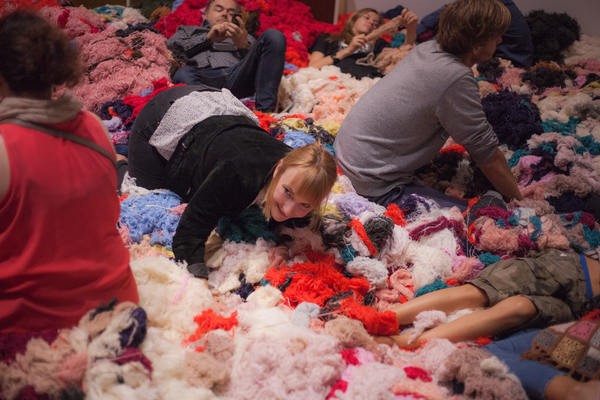 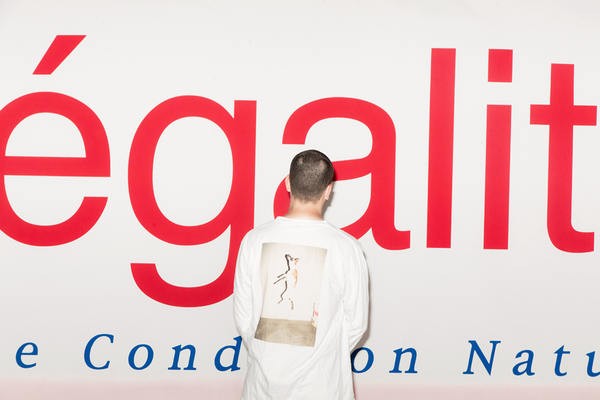 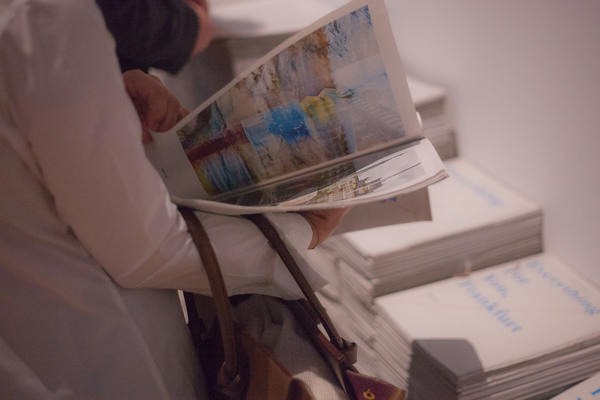 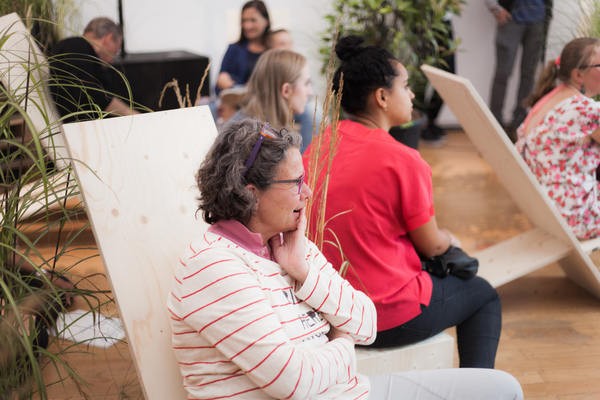 In a discur­sive group exhi­bi­tion, the schirn pursues a different approach and addresses the ques­tion of how peace actu­ally works?

Peace does not present itself as an object, rather as a process of interaction and communication – not only between people, but also between all involved in the ecosystem. This approach differs fundamentally from the humanist worldview, which places man at the center. The focus is now on the environment: on water, plants, animals, even inanimate things. A reevaluation of the hierarchies within the ecosystem as well as of mankind’s ultimately harmful appropriation and exploitation strategies is taking place. The works presented in the show are dedicated to this reevaluation, and, among other things, illuminate indirectly such social conventions as language or rituals of give and take that make human coexistence possible. The exhibition PEACE wants to trigger reflection on what peace can be. There will be associated live events like lectures, readings, poetry presentations, and dance and music performances. The interactive website WWW.SCHIRN-PEACE.ORG will assemble essays by Prof. Chus Martínez, Dr. Mary Zournazi, and Prof. Michael Marder, texts on the artworks displayed, video interviews with the artists, and other documentary material from the PEACE project.

The exhibition “PEACE” is supported by the Dr. Marschner Stiftung and the Kulturfonds Frankfurt RheinMain

In advance, the Schirn held a competition for a new PEACE logo. The independent jury selected the design in the form of a blue dot, submitted independently by both Bekata Ozdikmen (Turkey) and Paul Müller (Germany).

Dr. Philipp Demandt, director of the Schirn Kunsthalle Frankfurt, on PEACE: “What is peace? The question is simple, the answer difficult. In approaching it, we decided to change the perspective and ask: How does peace actually work? The PEACE exhibition thus appears at the right time – this is not only shown by the more than 600 submissions to the logo competition. Just now peace is a highly relevant subject for society, one that challenges discussions and active involvement. The works included in the exhibition show how artists of our time approach the issue – providing answers and being thought-provoking at the same time.”

“The history of peace is as old as humanity itself. While war is often considered to be in human nature, peace is viewed as something far more fragile and fleeting. In our media age war and violence are profitable events and politicians focus great attention on them. Peace receives broader social recognition as a capitalist economic issue only when economic disparity becomes less important and collective growth more attractive. The exhibition PEACE constructs connections with the help of which other approaches to a life with and in peace become discernible,” says Matthias Ulrich, the exhibition’s curator, and explains: “Peace is present, is withness, is being with the world and with others.”

The show opens with the participatory installation The Letter Writing Project (since 1998) by the Taiwanese artist Lee Mingwei (born 1964). It deals with wishes, yearnings, and needs, but also with the fear of articulating them. Visitors can formulate them in letters to either present them in the installation to be read by others or send them from the Schirn to specific addresses. Another of the artist’s works, titled Sonic Blossom (2013–ongoing), is being realized jointly with four Frankfurt museums and the Hochschule für Musik und Darstellende Kunst Frankfurt am Main. At each venue, singers will ask visitors throughout a week: May I give you a gift of song? They will then perform one of five songs by the composer Franz Schubert. Sonic Blossom will be staged in the Städel Museum (July, 4–9), in the Deutsches Architekturmuseum (July, 11–16), in the MMK Museum für Moderne Kunst Frankfurt am Main (August, 15–20), in the Museum Angewandte Kunst (August, 22–27), and in the Schirn (September, 19–24).

For his installation Golden Ghost (2011/2017), the Thai artist Surasi Kusolwong (born 1965) is hiding gold chains in tons of fiber remnants from industrial textile production that visitors can search for. The gold pendants were designed for the exhibition and produced in a small edition. The search for the chains in waste from the consumption industry raises questions about art, commodities, and values.

The Estonian artist Katja Novitskova (born 1984) is interested in the relationship between humane images and technical data. In her 2015 installation Pattern of Activation (planetary bonds) (2015), automated baby cradles look like objects from space travel, a giant protein molecule appears the same size as Mars, and automated toy insects struggle to make their way in glass cages.

The British artist Ed Fornieles (born 1983) has developed specifically for the exhibition Sim Vol. 1: Existential Risk (2017) – an RPG (Role-Playing Game).Taking up the simulated world of such games, he presents possible forms of a post-apocalyptic utopia. The theoretical background of the game includes ideas of chaos, chance generators, and language games. Visitors are invited to project themselves into individual players, based on interviews with them, and to develop further scenarios.

Fascinated by contemporary culture and the world of consumption, the Berlin artist Timur Si-Qin (born 1984) has deliberately adopted trademark strategies for his digital picture production. His brand New Peace blurs the boundaries between spirituality and consumption. Si-Qin is represented in the exhibition with several works: a traffic sign from his New Peace Pro Sign (2016), the two-part work On the Path to Mirrorscape (2016), and Mirrorscape Effigy (2016). These are images of landscapes between reality and fiction, between nature and technology.

Under the title Everything For You, Frankfurt (2017), the Belgian artist Jan De Cock (born 1976) has developed sculptures that he conceives of as a gift to the city, its inhabitants, and its architecture – just as in the “sculptural communism” he has already proclaimed in Hong Kong and Havana. In advance of the exhibition, he has briefly erected sculptures in Frankfurt’s urban spaces, recombinations of individual elements, and documented them in photographs. He presents his project in the Schirn in the form of a self-published magazine illustrated with photographs that visitors can take away with them.

The Polish artist Agnieszka Polska (born 1985) investigates the importance and influence of language as well as its materialization. The show features her installation The Body of Words (2015), consisting of three video works, in which she deals with the emergence of man as a speaking organism and self-conscious being and points to the beginnings of civilization.

With his installation Clément (2016), the French writer Michel Houellebecq (born 1958) has created an intimate memorial to his deceased dog of the same name. In the center of the dark,wood-paneled space with a carpeted floor and pictures on the walls there is a large vitrine containing the dog’s toys, devotional objects and reminiscences of his companion.

The British video artist Heather Phillipson (born 1978) projects herself into the psychology and physiology of animals. The protagonist in the filminstallation 100 % OTHER FIBRES (2016) is named Gavin – a poodle that, because of traumatic experiences and stress, no longer wishes to live. In the center stands his body, which could just as well be a human body. The shift from canine to human physicality encompasses desires and cravings, sex and reproduction as its subjects.

Three works deal with the subject of water in the last gallery. The Mexican conceptual artist Minerva Cuevas (born 1975) has filled one entire wall of the exhibition with a huge picture. Against a pinkish background with a bright blue mountain range one reads in luscious red letters: égalité (2004). We immediately recognize the underlying logo of the Evian brand, which the artist has replaced by the French word for equality. The motif of the wall painting is available as a poster that visitors can take home with them. Carried outside, it stands for free access instead of exclusivity and marketing.

The photo and performance artist Ulay (born 1943) has placed the question Whose water is it? (2012) in large, glowing letters on the wall. Currency symbols like €, $, and £ appear behind the letters. In recent years, numerous works by Ulay have dealt with the subject of water as a natural resource, also as a major component of the human body. A second work presented in the exhibition highlights the complexity of water in a simple and almost poetic manner: a drop of water falls onto a hot surface, sizzles, and disappears in a fraction of a second – a symbol of dripping onto a hot stone.

The PEACE exhibition ends with an installation by Isabel Lewis (born 1981) that, with its seating and plants, offers both a performance space and a stage. As the “host” of her occasions, the trained dancer Lewis organizes multimedia performances. She narrates, composes music one can hear, sings, dances, “seduces” the senses with aromas developed together with the fragrance researcher Sissel Tolaas, and serves special drinks and menus. In the framework of her Occasions, the central question of the exhibition is discussed in additional live events: How peace actually works?