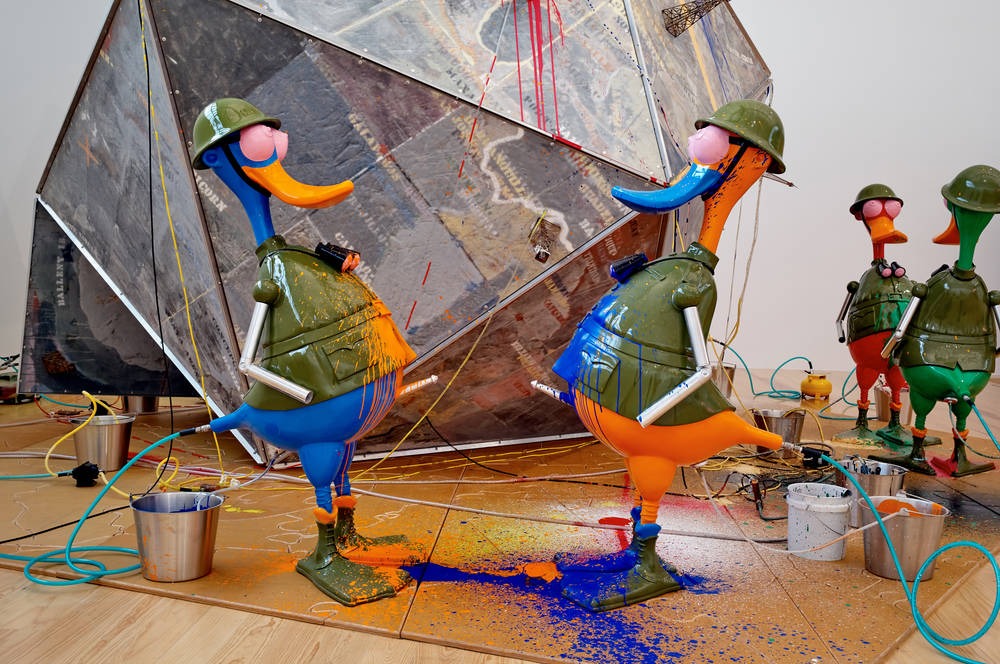 More than any other artist of his time, Richard Jackson has focused his attention on the radical expansion of painting. The American artist pushes the formal boundaries of the picturesque and creates situations, which link the application of the paint through the use of machines to its processual aspect. From February 6 to May 3, 2020, the Schirn Kunsthalle Frankfurt is assembling for the first time five of his altogether twelve characteristic Rooms—room installations based on the principle of automated painting. Some are viewable from all sides, others only through windows or peepholes. The exhibition provides glimpses into the Bed Room (2002), The Delivery Room (2006–07), The Dining Room (2006–07), The Maid’s Room (2006–07), and The War Room (2006–07). Jackson combines critical commentary on painting with social contexts, pairing this with provocative wit and ambiguity, as well as references to iconic works by artists such as Marcel Duchamp, Robert Rauschenberg, and Jasper Johns. Inside the rooms, comic-like figures, animals, or objects become the protagonists in a unique process: air compressors and pumps cause rich colors to flow through tubes and funnels, through ears, mouths, and other body orifices, and spread them across the floor, walls, furnishings, and the protagonists themselves. The thematic rooms document a painting process that is detached from the artist and expands into the spatial. By the time visitors enter the space, it is all over. They become the investigators of the previous spectacular painting act, and voyeurs of bizarre scenarios.

The exhibition “Richard Jackson: Unexpected Unexplained Unaccepted” is supported by the City of Frankfurt am Main and by the SCHIRN ZEITGENOSSEN.

Dr. Philipp Demandt, Director of the Schirn Kunsthalle Frankfurt, on the exhibition: “Richard Jackson’s Rooms are a unique combination of his both humorous and provocative critique of art and society. The Schirn is now presenting, for the first time, five of these unconventional and at times crude everyday scenes, covered in garish colors by the artist’s automated painting machines. Jackson succeeds in creating an impressive pictorial setting that he uses to destroy and thus ultimately create his works.”

Matthias Ulrich, curator of the exhibition, about the artist: “Since the 1970s, Richard Jackson has pursued a consistent development of painting—up to and including the mechanical production of paintings extending into space. Essentially, this is an attempt to depersonalize the painting process. The artwork and its production are identical in Jackson’s work. Both are at the center, both may be viewed separately, and both ultimately merge into one entity, into a single image.”

Richard Jackson developed his working method, belonging to so-called expanded painting, against the background of the art discourse in the US during the 1960s, which was influenced by Abstract Expressionism and conceptual Minimal Art. In the 1970s and 1980s, he focused on the concrete production of paintings, consisting of a stretcher and canvas with paint. The artist created his Wall Paintings directly on the museum wall with the still wet surface of the canvas, leaving it there with its back to the viewer as a reference to the process of creation. He furthermore stacked hundreds of canvases to form three-dimensional objects and sculptures within the space. It is only the paint pouring out at the sides that hints at actual painted surfaces. He thus reflected and criticized both the institutional conventions and the viewing habits of the art world. Through the use of specially prepared vehicles or self-invented machines, he eventually developed an automated kind of painting, independent of the human gesture, that characterizes his Rooms. In these installations, paint is sprayed once at the push of a button to create a three-dimensional painting.

The prototype of Jackson’s Rooms is the no longer preserved work The Bedroom, created as an experiment between 1976 and 1982. In reference to Robert Rauschenberg’s Bed (1955), Jackson rebuilt a complete bedroom with its furnishings and covered the entire room from top to bottom with gestural traces of paint and splashes of color. In this first version, the artist still personally acted as a painter. The Schirn presents the later remake of the work Bed Room (2002). Jackson reduced the amount of furniture in the room, while the act of painting was now performed by the bed filled with paint. Elevated by a rotating lift, the bed distributed it in a circle on the ceiling.

Similarly, Jackson developed The Maid’s Room (2006–07) as a result of an in-depth examination of a work of art: Marcel Duchamp’s iconic piece Étant donnés: 1° la chute d’eau, 2° le gaz d’éclairage (1946–66). In his reinterpretation, Jackson transferred the action from a wooded area to an interior space and changed elementary motifs, such as the waterfall mentioned in Duchamp’s title, by replacing it with a washbasin, and the gas lamp with a vacuum cleaner pipe that he made to squirt paint. Nevertheless, Jackson retained the key aspect, namely, the voyeuristic and simultaneously restricted perspective of the viewer through a peephole or narrow window gap onto the naked body of a woman with legs akimbo. Jackson’s work is a reference to a tradition of artistic representation already cited by Duchamp, whereby the female genitals serve as a metaphor for the pleasure of looking as well as for creativity itself, such as in Gustave Courbet’s painting L’Origine du Monde (1866).

This aspect is echoed in The Delivery Room (2006–07), a warlike birthing scene with a physician bending over a woman giving birth. Around her we see babies, abdominal prostheses, paint buckets, and also paint explosively dispersed throughout the room. As in many of Jackson’s installations, color in this case implies bodily fluids. A man, presumably the father, uses his camera to film the event, which is transmitted to a monitor outside. It is only from there, or through a small round window, that viewers can get a glimpse of the action. The harrowing portrayal of the birth is also a reference to the efforts of artistic creation. At the same time, in its comically savage staging, it dismantles a heroism of painterly creation that was celebrated not least in Abstract Expressionism.

The Dining Room (2006–07) depicts another grotesque family portrait placed by Jackson in a room that can be viewed from all sides. On top of the dining table in the center, with his trousers lowered, the father squats and literally vents his displeasure. Colorful paint is spread across table, dishes, floor, and the rest of the family members who apathetically attend the scene. Yet in a peculiar way they nonetheless appear to be involved in the escalation. Paint runs through funnels and canisters into their heads, only to flow out again elsewhere and spread throughout the room. Above the table a chandelier announces “HOME SWEET HOME” in flashing neon letters.

The setting of the installation The War Room (2006–07) is a political battlefield. Figures of ducks in complementary colors, dressed in military uniforms and with pink breasts as eyes, stand in pairs facing one another around a polyhedral globe and have splashed each other with paint; two further copulating figures are hiding inside it. The world map refers to the Dymaxion Map patented by Richard Buckminster Fuller; with twenty equilateral triangles, it allows a proportionally correct
representation of the continents. Jackson shows them peppered with miniature drilling rigs that ultimately expose the war scene as a battle for dwindling resources. Like The Dining Room, this open room stands on a jigsaw-like floor. It is Jackson’s usual solution to a technical problem—the protection of the ground during the act of painting. At the same time, the jigsaw refers to the performative process of creating a work of art and its reception as a composite reconstruction of the painting process.

Richard Jackson (*1939) lives and works near Los Angeles, California, where he taught Sculpture and New Forms at the University of California (UCLA) from 1989 to 1994. His works have been shown internationally in numerous exhibitions. In 1997, he was represented at the 4th Biennale in Lyon, and in 1999 at the 48th Biennale in Venice. In 2013, the Orange County Museum of Art (OCMA) in Newport Beach, California, dedicated a retrospective to him, which was subsequently shown at the Museum Villa Stuck, Munich, and at the Stedelijk Museum voor Actuele Kunst (S.M.A.K.), Ghent.

The exhibition is supported by the SCHIRN ZEITGENOSSEN, a group of private patrons of young art at the Schirn Kunsthalle Frankfurt. For their commitment, the Schirn would like to thank Jan Bauer and Lena Wallenhorst, Oliver and Nicole Behrens, Olaf Gerber and Nicole Emmerling de Oliveira, Markus Hammer and Birgit Heller, Hartmuth and Lilia Jung, Andreas Lukic and Sunhild Theuerkauf-Lukic, Shahpar Oschmann, Björn and Kim Robens, Jörg Rockenhäuser and Vasiliki Basia, Reiner Sachs and Brigitta Bailly, as well as Julia Schönbohm and Ralf Böckle.