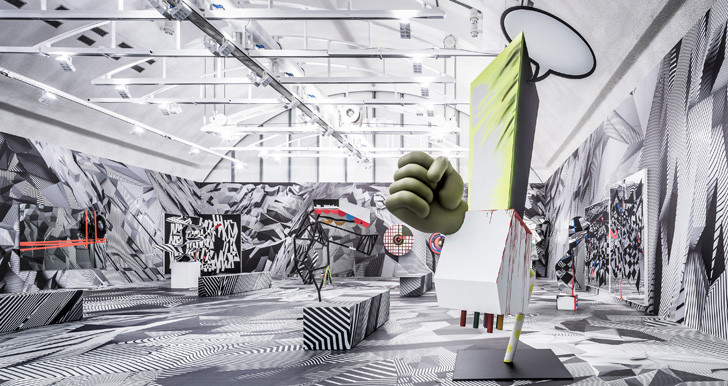 Exhibition view © Schirn Kunsthalle Frankfurt, 2014
TOBIAS REHBERGER
Home and Away and Outside
21 February – 11 May 2014

He is considered one of the most influential artists of his generation. He is the recipient of a Golden Lion from the Biennale di Venezia, a wanderer between the realms of art, design and architecture, constantly prepared to question matters as they stand. Must a work be seen in order to exist? And how is it possible to see at all, when all of our senses are over-stimulated? Distributed over three gallery spaces, the exhibition will begin with a visually unsettling, colorfully appealing “gesamtkunstwerk.” A dazzle camouflage derived from military strategy will occupy the floor and walls and force its way into the space. Its flickering and shimmering all-over effect will be further intensified by its combination with paintings and sculptures, which Rehberger will integrate in this way for the first time. While this installation will be characterized by sensory overload, the second part of the exhibition will surprise the viewer with its academic integrity and a concentrated selection of applied and functional artworks revealing the concept of sculpture that has distinguished Rehberger’s works since the 1990s. Part three of the show will be located in the SCHIRN rotunda, for which the artist is developing a large-scale, sitespecific work. Following exhibitions in Europe and Asia, the SCHIRN is mounting the first extensive presentation of Rehberger’s oeuvre in Frankfurt – a trenchant yet humorous body of work that holds a prominent position in contemporary art production.
www.schirn.de