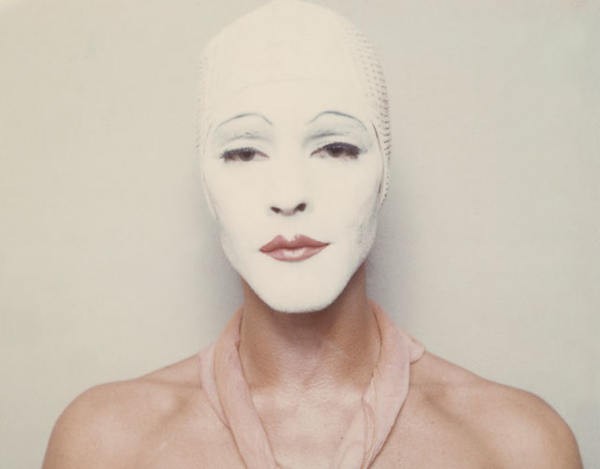 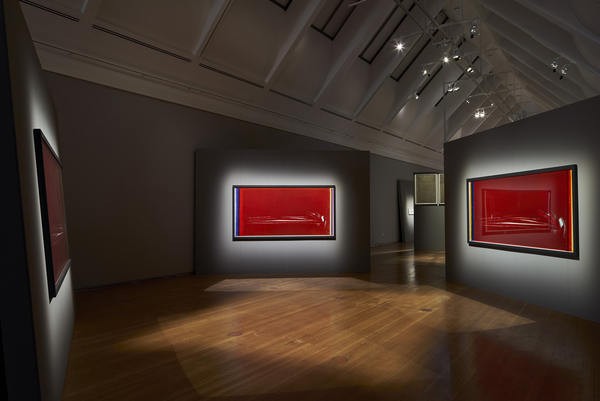 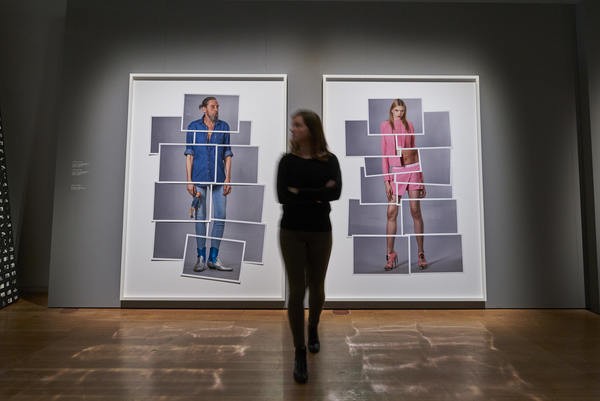 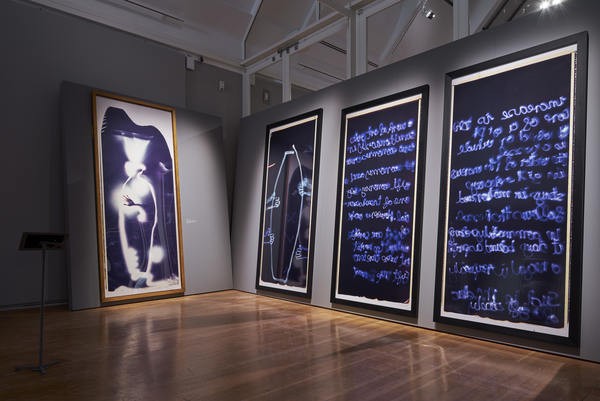 From October 13, 2016, to January 8, 2017, the Schirn Kunsthalle Frankfurt is presenting the first-ever major survey exhibition of works by the exceptional artist Ulay. Ulay describes himself rather selfdeprecatingly as the “most famous unknown artist”. For almost half a century, he has been radically merging art and his own life. His concept of transformation enables Ulay to constantly create new identities. His medium of choice is analog photography and, in particular, Polaroids, which form an essential part of his artistic practice. To this day, his body remains the object of his research; it is marked by various influences and can be read like a canvas. How is identity expressed within the body, and which strategies might alter identity? These are questions Ulay seeks to answer in his work. Skin is of particular significance. The artist sees it as the surface of both the body and the photograph. By shaping the skin, piercing it, or adorning it with symbols, he tells confrontational stories about identity and the transgressions to which it is exposed. In addition to numerous individual actions of performative photography and Body Art, Ulay has also realized a great number of performances and projects with other artists: he created photographic series with his former muse Paula Françoise-Piso in which he intensified self-analysis until the complete dissolution of the self; with the artist Marina Abramović, he managed to further evolve performance art, setting the standard to this day. In addition, he developed a number of participatory works with people from marginalized groups. Ulay defines photography and performance art in a distinctive and very personal way. The notion of “Identity through change” remains central to his work and allows him to elude any fixed attributions of identity. The retrospective exhibition at the Schirn brings together his remarkable oeuvre from 1970 to 2016. On show are more than 150 works, including photographs, films, project documentations, objects, and sculptures, as well as works on paper. The public will be presented for the first time with a number of works that the artist previously held back due to his absolute need to be present, and his skepticism of the art world. On the occasion of the opening of the exhibition at the Schirn, Ulay will present his performance “Who am I?”.

The exhibition “Ulay Life-Sized” is supported by the Gemeinnütziger Kulturfonds Frankfurt RheinMain as part of its current focus theme “Transit” (2015–17).

Dr. Philipp Demandt, Director of the Schirn Kunsthalle Frankfurt, on the presentation: “This exhibition on the life and work of Ulay has been long overdue. For over forty-six years, Ulay has created works that are so radical, so idiosyncratic and strong that they have become almost unmissable. Looking for an answer to the simple question of Who am I?, he gave distinction to the realization that there is no such thing as just one identity. For the first time, the Schirn presents Ulay's unique work, allowing visitors a ‘life-sized’ encounter with the artist.”

“The body is the medium par excellence for Ulay. Physical experience and the idea of a corporeal language, in the sense of a body on which and through which experiences become visible, have been central to Ulay’s many years of artistic practice. In order to experience oneself within the body, it seems necessary to hurt this body and to overcome the boundary set by the skin. Skin represents the surface of the body, its protection; yet, at the same time, it is in a constantly vulnerable state. Identity is inscribed in the skin,” according to Matthias Ulrich, curator of the artist’s exhibition at the Schirn.

Ulay is considered the founder of performative photography. Born 1943 in Solingen, Germany, his way of conceptually merging photography and performance art remains unique to this day. At the end of the 1960s, he left Germany, changed his real name Frank Uwe Laysiepen to Ulay, and went to Amsterdam where he joined a Dutch anarchist movement, the so-called Provos. As a consultant for Polaroid International Amsterdam, he had unlimited access to film and cameras; he traveled to London, Paris, Rome, and New York and began to experiment with art photography. In this way, during the early 1970s, Ulay produced a number of photographs in which he subjectively and narratively explored the role of social gender—both in self-portraits and in portraits of transsexuals, transvestites, and homeless people.

He has used the medium of photography to document and assimilate the process of his sometimes more feminine, at other times rather masculine appearance and identity. The principle of seriality, with which he depicts and captures certain processes from start to finish, meanwhile emphasizes the performative aspect. Ulay began a new creative phase during the mid-1970s: he turned away from photographic selfexploration to devote himself entirely to performances in front of an audience. At the same time, he started working collaboratively with other artists, such as Jürgen Klauke. With his former partner Marina Abramović, Ulay devised performances representing and commenting on interpersonal relationships that examine the possibility of a new identity created by two people. Photography as a means of artistic expression became less important during the twelve years living and working with Abramović; he only resumed using it at the end of their symbiotic relationship in 1988. During the following decades, he created numerous participatory art projects with people from marginalized groups beyond his everyday environment and while traveling to the United States, Australia, India, Myanmar, and Syria. To date, Ulay lives his idea of the nomadic artist who works anywhere in the world and is only committed to himself, having to live up to his own expectations alone.

The exhibition at the Schirn places Ulay’s large-format photographs of the 1990s at the beginning. With the aim of reinventing analog photography, he created his Polagrams (1990–93) and the multipart work Can’t Beat the Feeling – Long Playing Record (1992) in a special Polaroid Studio in Boston. The Polagram Self-Portrait (1990), measuring 2.75 x 1.12 meters, reveals to the viewer an artist who appears not in the shape of his own body, but as a mere trace of himself: he disappears—in the truest sense of the word—into the camera. Disappearance also plays a central role in the Anagrammatic Bodies from 2015. With this work, Ulay ties in with the iconic photo collages from 1972 onward, in which he deconstructed his own body in a modular form, disintegrating it into fragments to reassemble it with photographic parts of other people to form a hybrid identity. In his current work, he mixes fragments of his own body with those of female models and actresses, thus producing gender hybrids.

In 1974, Ulay devised his own obituary Mein Abschied als einzige Person (My Farewell as a Single Person), which marks the beginning of his collaboration with Marina Abramović. The Schirn presents two videos of performances that Ulay and Abramović created together: Relation in Movement (1977) and Imponderabilia (1977). In the latter performance, the audience was included for the first time: they are both standing naked and facing one another in a passage, which is also the entrance to the Galleria Comunale d’Arte Moderna in Bologna, Italy. To enter the museum, visitors had to decide which of the two bodies they would touch with either their front or their back. The crossing of boundaries and the breach of the private sphere are key issues that Ulay had already examined in his earlier work, Intimate Actions. Skin forms a natural boundary for the artist that has to be broken in search of identity. An eleven-part Auto-Polaroid series documented the performance GEN.E.T.RATION ULTIMA RATIO (1972): Ulay had the title tattooed on his left forearm, and the entire piece of skin was then removed by a surgeon. In White Mask (1973–74), the artist embalmed his head with white paint so as to obliterate himself. A continuation of this approach can also be made out in the seven-part Sweet Water Salt Water (2002), a series of selfportraits created almost thirty years later. The body recedes more and more to be taken out of the image eventually, or rather, replaced: the actual picture is only a half-length portrait of the artist, and glasses filled with water act as a proxy for the remaining body parts.

Ulay’s most recent performances, such as Invisible Opponent (2016), have not lost any of their intensity and intransigence compared to those from the 1970s. In his latest works, Ulay sees the body as a counter-concept to the pressures of self-optimization, and the ban on aging in our society. At the same time, the artist once again transforms issues of gender and sexuality, which he already explored in the Auto-Polaroids S’he (1973–74) and the photo collages Renais sense Aphorisms (1972–75) and Pa’Ulay (1973–74). He follows up on the current queer, feminism, and posthuman discourses while unmistakably referring to his earlier work. In addition, he highlights that text is central to a large part of his artistic activity. Literature plays a significant role in his performances from 2016: the poem Her Kind (1959), written and recited on tape by American poet Anne Sexton, became an integral part of Ulay’s performance Pink Pain (2016). The exhibition at the Schirn concludes with the Aphorisms (1970–71), which Ulay created in his early years in Amsterdam, and in which all central aspects of his work are already present. In these typescript texts on paper, photo collages, and drawings, Ulay had first laid out the program of his performative photographic work.

Ulay, born 1943 in Solingen as Frank Uwe Laysiepen, lives and works in Amsterdam and Ljubljana. From 1971, his works have been presented in numerous solo exhibitions, including at the Nederlands Fotomuseum in Rotterdam (2016), Salon Dahlmann in Berlin (2013), the National Centre for Contemporary Arts in Moscow (2007), at Škuc Gallery in Ljubljana (2009), Vrej Baghoomian Gallery in New York (1992), Burnett Miller Gallery in Los Angeles (1989), De Appel (1976) or Gallery Seriaal (1974) in Amsterdam. Together with Marina Abramović, Ulay realized performances worldwide from 1976 to 1988, such as The Great Wall Walk (1988) in China, Nightsea Crossing (1981–87) in Berlin, Helsinki, Lyon, New York, Sydney et al., Expansion in Space (1977) at documenta 6 in Kassel, and Relation in Space (1976) at the 37th Biennale di Venezia. In significant group exhibitions, his works have been on show in recent years at Fondazione Prada in Milan (2015) and at the Schirn Kunsthalle Frankfurt (2013), as well as, prior to that, at Fotomuseum Den Haag in The Hague (2007), MoMA PS1 Contemporary Art Center in New York (2002), Ateneum Art Museum in Helsinki (1995), and the Centre Georges Pompidou in Paris (1989). He has realized performances at, among others, the Musées d’art et d’histoire in Geneva (2016), at Stedelijk Museum in Amsterdam (2015), during the Thessaloniki Biennale of Contemporary Art (2015), and at the Venice International Performance Art Week (2014). Ulay has received a number of awards for his works.