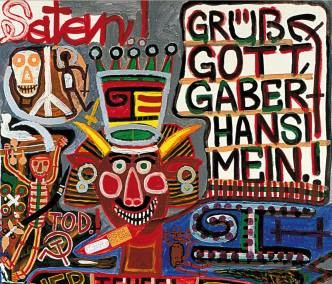 Thinking outside the norm can result in fantastic works. Linked to creative abilities, to mental states that deviate more or less from the “normal,” the everyday, Outsider artists reveal the unexpected in their works. Often located on society’s margins, they illuminate the frontiers and contradictions of human existence, communicating a profound unease about the relationships between reality and fantasy. They direct our gaze onto the more opaque paths of thinking and offer an occasion to ask fundamental questions. In a spectrum from the 19th century to the present day, the exhibition shows an exemplary series of spaces in which the individual worlds of the artists open up to intense experiences: exploring the Ewigkeitenendeland (“End-of-eternities land”) of August Walla, diving into Aloïse’s romantic dream worlds or the precise mathematical utopias of George Widener, or encountering the life-size woven cocoon by Judith Scott. Transformed worlds will inspire observers to venture outside the structures of certainty of their daily lives.