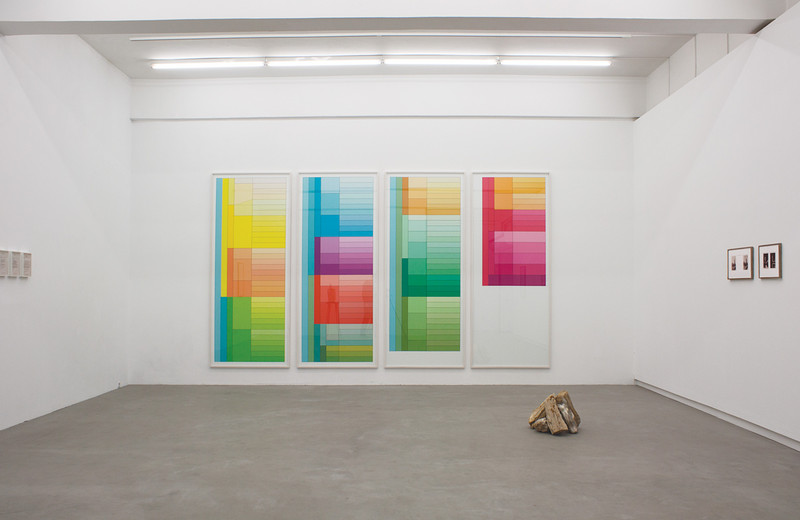 The current group show at SCHLEICHER/LANGE combines works by Toril Johannessen, Elizabeth McAlpine, Evariste Richer, Laurent Montaron, Lisa Tan, in an eclectic and non-representative investigation of Time.
The title of the exhibition is a precise description of the phenomenon: time, a physical, measurable variable that denotes a sequence of successions and therefore describes a clear and irreversible direction. As the fourth dimension it renders orientation in space possible.
Above all, timekeeping complements visual and geographical points of orientation for the observer, enabling us to not only know where we are, but when we are there – on a timeline that is subdivided into the precise units of years, days, and seconds. Due to it's mono-directionality, it is bound up with transience and mortality, and our attempt to protecting us against the passage of time through memories. Memories are individual and thus play an important role in the creation of a person’s identity. In the context of society, memories serve to create history.
The perception and experience of time is subjective and different for every individual, despite the fact that it can be measured objectively using a defined scale. In theory, therefore, it is the same length for each person. Different cultures likewise have strikingly dissimilar ways of approaching time. In Western societies we tend to think of time as being a resource, or consider it as an object of value. We live with the conception that we ought to manage and use our time, and that time is something we can waste, lose or find.
All of the exhibited works from the five artists participating in this show refer to time in a different way and investigate possibilities for an alternative approach, not just to time as a theme but also to how it can be measured. They give rise to various questions, all of them taking an angle on the underlying theme: “How is it possible to represent time? Is it possible at all?”
Timeand systems of measurement(in general) are recurrent themes in Evariste Richer’s artistic practice. His two works, Feu de Camp(2009) and Geological Scale(2009), offer a framework for the other positions in the exhibition, in that they go furthest back into the past. The four large scales that go to make up Geological Scaleare presented bereft of their explanatory text, making them like empty shapes of color. The diagram, enlarged by Richer, is based on the geological timescale of 2008, which was developed by the International Commission on Stratigraphy, and which shows the history of the earth in a chronological and hierarchical section back through the millions of years until its beginning. By omitting the textual information, Richter creates a moment of disorientation in a tool actually meant to help us reach a better understanding of the course of time. Only its title hints at it's origin.
In the context of the exhibition, it symbolizes the beginning of time and refers to an era before time was measured, and before human history, in other words to an abstract “time” before “time.”
For Feu de Camp, Richer arranged pieces of fossilized wood that are more than 5,000,000 years old to form a campfire. He draws our attention to the history of fire, which is closely linked to domesticity and therefore the earliest stages of civilization and was crucial to human evolution.
At the same time, as a “fossil fuel” it links up to modern civilization, alluding to one of humanity’s major problems, the consumption of energy. Furthermore, the use of wood and stone in the exhibition refer to the history of sculpture.

Toril Johannessen’s series Words and Years(2010-2012) consists of graphs and charts, which display the results of her research with regard to the use of certain words (such as “Miracles” or “Conventions”). The artist analyzed the regularity with which specific keywords appeared in printed press throughout the years, beginning with the first editions of magazines (Nature Journalor The Science Magazine). This piece provides a contrast to Richer’s work, which focuses more on the beginnings of the world and of human history. While Geographical Scalealso has a scientific, analytical approach Johannessen’s work takes a dierent angle: Her works reflect a social aspect, namely how a period shows itself through different themes, characterized by certain keywords and how these define an epoch. In this way they refer to an age of advanced civilization, when an attempt is made looking back to ascertain what a certain “time” meant, to thus evaluate it and classify it.
Lisa Tan’s Letters from Dr. Bamberger(2001 – 2012) are letters by her doctor referring to routine medical checks over a period of several years. As a series, they document the progress of time through a certain, measurable period, shown through the dates on the letters. Despite the fact that the information is medical, and therefore more of a scientific nature, it is a work which gives a different coloring to the measurement of time: through a very private and personal element (the open portrayal of state of health). We can sense here how hidden personal memories are the ways in which we measure time and also orient ourselves, just as we can discern the role of mortality in all this, i.e., the limits to the timespan of any individual life.

Laurent Montaron‘s Lent portrait de Sainte Bernadette(2011) takes this process of the temporal determination of a person’s life, which culminates in death, to an extreme. In his 16 mm film loop we see an image of Bernadette Soubirous in slow motion, just as the camera moves from the mouth of the saint to their eyes. Since Bernadette lay down to die in Never, France, in 1879, her body has shown no signs of decay. She was declared holy in 1925 and made a saint on 8 December 1933, according to a church procedure which involved her co n being opened three times.
On each occasion her body was intact. Questioning the linear nature of time is a recurrent theme in Montaron's work. In the context of the exhibition Lent portrait de Sainte Bernadetteadds a further aspect: time's unexplained secrets and mysticism. The looping film formally reflects the continuous suspense of a moment “out of time”.

Elizabeth McAlpine’s work in the series Time Found: Big Ben(2010) suggests the possibility, in a metaphorical sense, of “finding” time, achieving the physically impossible. It involves postcards from the famous clock tower in London, collected by the artist since 2007. She tried in the series to find images that cover a full 12 hours with a postcard for each minute, a fact of quite marginal import for the postcards themselves. The question this leads to is “Can we find time?” In general when we talk about this what we mean is that we will dedicate time to someone or something.
This is a luxury in the modern, westernized world, in which we try to use our time as effectively as possible, and not to “waste” it, a use of language which clearly shows us a perceived shortage of this resource. In this regard, McAlpine kindles a critical discussion or philosophical discourse, thus rounding out the set of themes relating to time, its measurement, import and capture.