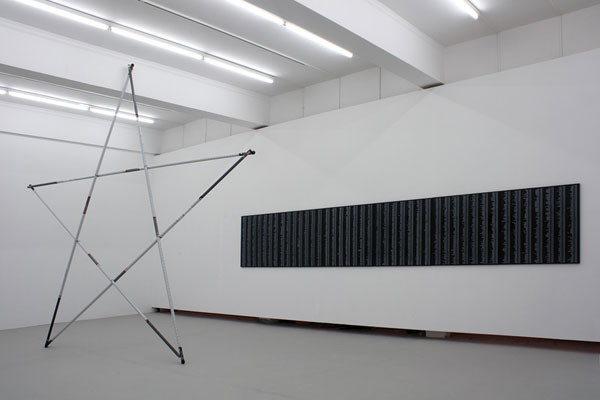 For his first exhibition at schleicher+lange – Berlin, Evariste Richer proposes a series of new pieces alongside older ones, under the title “Atlas Ellipticalis”, a deliberately dyslexic reinterpretation of the title of one of Antonín Becvár’s three atlases (Atlas Eclipticalis 1950.0 ). The artist’s interest in these charts for interpreting the sky and meteorological phenomena, which he considers at once as meta-texts and palimpsests, enables him to assemble two of his preferred lines of work: scientific lapsus linguae and the sedimentation of meaning. Incidentally, we can also note the re-appropriation of the ex-libris of Modernism such as grids, text, monochrome...
Becvár’s Astronomical Atlases are the best-known of their kind and have been the most widely used since the 1950s. Nonetheless, a certain shift in the coordinates means they are destined to gradually become obsolete, meaning this chart is subjugated to time, space and the defined point of view that follows from it. Thus, the way in which the artist deforms the title of the first in a series of three pieces (from Becvár’s three Atlases), “Atlas Ellipticalis (Part 1)”, plays on the notion of ellipse, a mathematical term referring to the trajectory of the stars and a stylistic device signifying gaps in discourse. The piece itself, enriched by its title, is made up of 32 inverted scans of the 32 pages of the Atlas Eclipticalis. The spectator finds him/herself on the other side of the mirror, at the exact opposite of his point of view of the universe. This inversion leads empirically to a conceptual vertigo, due to the sudden remoteness, several thousand light years away from earth. This piece is reminiscent of many others, in particular Gerard Richter’s Atlas, which made an impression on Evariste Richer when it was first presented at Documenta X, and the symphonies of John Cage, composed from Bečváč’s constellations. Interested in bringing his own atmospheric references into art history, Richer contributes here to validating the spectral nature of the heavens.
The artist has placed another work facing this piece: “Principe d’Incertitude” (Uncertainty Principle), from 2003. On six enamelled plates, in the typeface Univers, in white on a black background, it gives an exhaustive list of all the satellites launched into space since the start of space exploration up to the date the piece was completed. Its title explicitly refers to the beginnings of quantum physics, which, in 1927, led Heisenberg to lay down the uncertainty principle (or indeterminacy principle), which posits that the position and momentum of a particle cannot be known simultaneously. This scientific flaw does not prevent humankind from developing a whole technological arsenal for space exploration, but it is as if something were missing – the omniscience it seems to strive for?
Another work in the show, “Stella” (purgatory), consists of a 440 cm tall star constructed from five vaulting poles that stands upright in the exhibition space. While on the one hand being a tribute to Dante’s “Devine Comedy”, in which each of the three acts end on the word “star”, this fragile sculpture also refers to the human urge to push the boundaries of our confined space.
Placed on the floor in front of one of the walls, “Trognon” (core) is made up of two sets of ten brass tubes that have been pushed into each other, the smaller into the larger, until they meet each other in the smallest connection, like two poles that create a forcefield between them. The artist refers to the work as a fossil-fragment of Infinity.
Lastly, the work “Je suis une caverne” (I am a Cave) also plays on the inversion of Man’s point of view of himself and the world. The artist has placed a silver spoon containing “cave pearls” encased in glass on a plinth. These are small quasi-spherical calcareous concretions found in caves where calcareous springs circulate. By suggesting the deglutition of the “pearls”, Richer compares Man to a cave with its urges, reasoning, dreams (reference here to Pluto’s allegory of the cave), nourished by projections of a huge and magical outside world, of fluctuating images, necessarily incomplete. Here, the human body is somewhere between the infinitely large and the infinitely small, possessed of a sort of internal planetarium, where the universe finds itself weightless for the time it takes to digest...
Evariste Richer was born in 1969 in Montpellier (France). He lives and works in Paris. Richer studied at the DNAP École Nationale des Beaux-Arts in Grenoble as well as at the DNSEP École Nationale d’Arts de Cergy-Pontoise. Evariste Richer has shown his works at the Centre Pompidou Paris, at the Fonderie Kugler in Geneva, at the Kunstverein Braunschweig as well as at CRAC Alsace.
www.schleicherlange.com