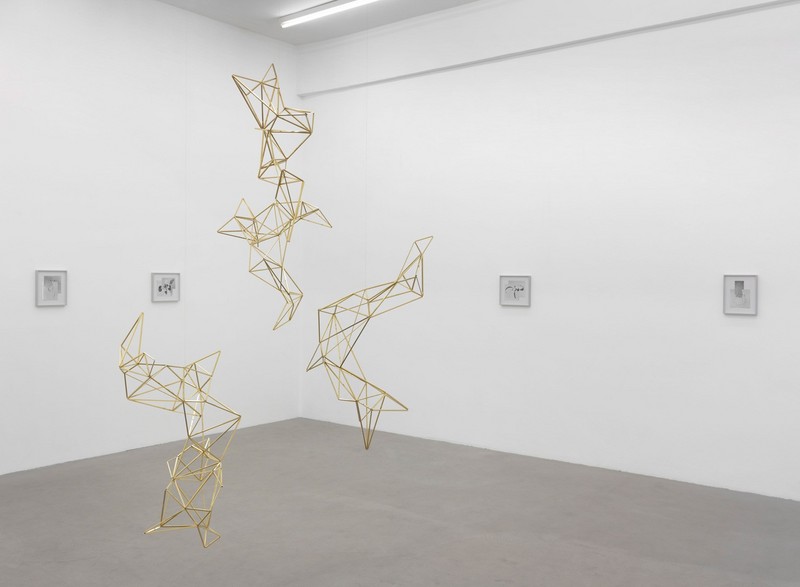 Franziska Furter’s current solo show at SCHLEICHER/LANGE consists of three groups of works: Shapes and Spells and Turbulences. Among other things, it concerns itself with the happiness of immersion and the search for the line

Shapes are small-sized collages. They are each made up of two sheets, revealing filigree blades of grass, branches and twigs. The sensitive combination of the existing fine ramifications of the plant parts of the two sheets gives rise to di erent dynamic lines and curves that seem to float in space and yet also seem to have been drawn by. The lightness of these works on paper is reflected in the names given to the Shapes, which are those of regional winds, such as shape amihan or shape gilavar
Franziska Furter connects the sheets at the points where she beforehand created an empty space. Above the latter, i.e., the conscious elision or removal of certain sections, she creates a space of possibility. In ensures the ramifications of the plant pieces can combine in this organicdynamic curve and our eyes can wander over these graceful lines.

These curved lines reappear in the group called Turbulences. The name refers to the vortex that has left its mark on the surface of the paper, as if something tumbling had touched the paper softly, leaving a single line behind, and had then blown on, so softly are these drawings placed on their medium. Presented in a series, these one-o s with their tender curves resemble variants on a theme, as in music, as with a score which creates a visual rhythm and unleashes a movement that then echoes in you.
By means of drops of ink and soap that she spreads on the surface of water she “draws” the contours and curves of the Turbulences on paper, a technique that she first used for her series entitled Corona in 2012.

In Spells she transposes the line into three-dimensional space and explores the sculptural side to the drawn line, staging it as a playful sculpted object. Within her oeuvre, these geometric structures made of brass squared pipe refer back to earlier pieces, such as Crystal Silence, Islands or Mojo, advancing the ideas first expressed there.
Consisting of triangles and squares, they continuously grow together to form this sculpture with its airy body. They look di erent from each angle, as when you walk round them some lines are obscured by others and disappear or are emphasized. The sculptures appear to float before the white background of the gallery space, held in place by invisible forces. As if someone had brought time to a standstill while they gradually descend from the ceiling.
Spells as a title has something magical about it, refers to something that could bring happiness or protection. As do the epithets of the pieces, which stem from Furter’s research on various divinities and fabled creatures in di erent contexts.

Furter’s oeuvre enables us to immerse ourselves in the artwork, just as she does in the work process that precedes them, and both aspects are of critical importance to her. For example, while researching the new pieces Furter came across Fredrik Sjöberg’s book “The Fly Trap” in which she found formulations and topics that have always influenced and typified her work as an artist: such as immersion and patience, meticulousness and subtlety, the concentrated focus on a selected, precise area and an emphasis on it until the results make sense.
We can also discern Franziska Furter’s basic themes in her recent work. As in previous pieces, she is busy exploring the limits of drawing as a medium, embarking on new paths and trying out new artistic means, in an e ort to interpret the genre and exploit the performative dimension to drawing.

One-o s shown in the series resemble thoughts that are presented in their many di erent aspects, something that we can see in Shapes. The idea of something such as is manifest in her works and materializes there is important, not whether the piece is perfectly complete. She attaches importance throughout to the process, whereby her art always adheres to an intrinsic logic, as is the case with Turbulences. She frequently juxtaposes strength and fragility, fostering a dialog between opposites, with thesis facing antithesis, forcing the viewer to take a position, as for example with Spells. The invisible is a conscious decision to elide things, in order to concentrate and focus on the essentials. Often, this gives rise to the poetic side to her work, to the quiet, unfinished thoughts as opposed to rigid doctrines that she so rejects.

Franziska Furter’s current solo show is her fifth with SCHLEICHER/LANGE.