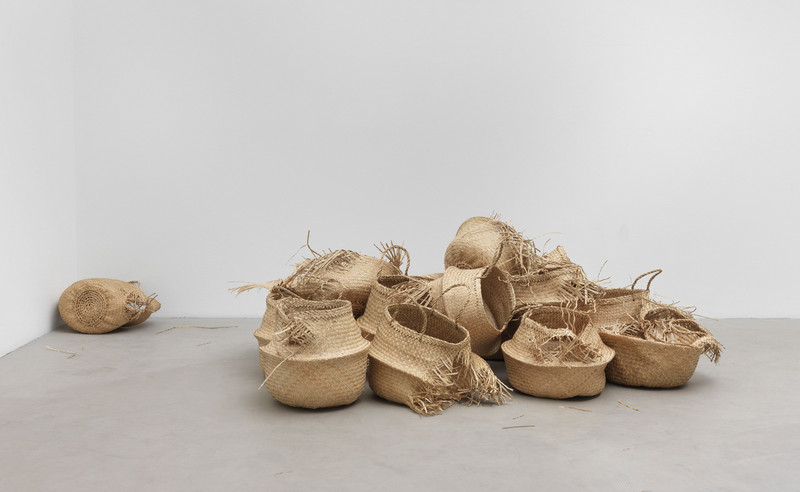 In the exhibition space, two work groups are juxtaposed and enter into a dialogue:
The photographic works Man of his word show a male figure performing mudras with gloved hands.
Mudras are spiritual tokens, gestures with the hands intended to take the person performing them to a higher spiritual level whilst at the same time representing it visually, embodying the level; as a rule the gestures are made with bare hands. Therefore, the gesture not only serves as the medium of a specific meaning but also represents an entire idea that leads to the higher level. The Bhutadamara mudra for instance, for which the hands are crossed and some fingers are entangled, serves as a protective gesture - to ward o evil.

Moreover, mudras entail a kind of sign language referencing the very beginnings of script, such as hieroglyphs or pictograms. Language and communication in general often play an important part or have an important function in Loboda’s work and are interwoven with its visual forms of presentation and materiality.
For example, the expression “man of his word” is a synonym for a gentleman. Such a person is the epitome of civilized, high culture, i.e., both the expression itself and any person described as such are media of meaning, the actual embodiment of a notion of a distinct, particularly civilized code of conduct that is similar the world over, and is analogous to the mudras, only on a different level. A gentleman stands for social perfection and mudras for spiritual perfection, each in a different social context.
At second glance, performing these sacred gestures wearing gloves and as a gentleman, a “typical” representative of male Western culture, is strangely unsettling.

In the exhibition space, these two symbols of high culture are confronted with signs of the decay of a culture – a group of battered raffia baskets A rapid approach, or more likely departure (2014). The baskets are witnesses to an act of violence and, by virtue of their physical impairment, refer to locations and the remains of these that have been abandoned because of some dire situations or other. The baskets illustrate a coarseness towards something produced with a great meticulousness, highlight its destruction, despite the fact that this something is considered one of the fundamental symbols and attributes of domesticity and thus of civilization.

Lobodas sculture of a lioness entitled “Her Artillery” is positioned with its back turned towards the viewer.
Regardless of it’s seemingly domesticated position, it emantes a sense of power as if it could turn to confront the spectator at any moment. The size of the sculpture underlines the subliminal menace, while the viewer is left with the task to decifer the meaning the pair of gloves on which the beasts paws rest.

Currently, further to the exhibition at SCHLEICHER/LANGE, her work can be seen in a solo exhibition at the Braunschweiger Kunstverein (Haus Salve Hospes). In 2014 Maria Loboda also participated in the Klöntal Triennale #1, Kunsthaus Glarus, the Cuenca Biennale, the Taipeh Biennale as well as various group exhibitions, among others at the MUDAM in Luxembourg.