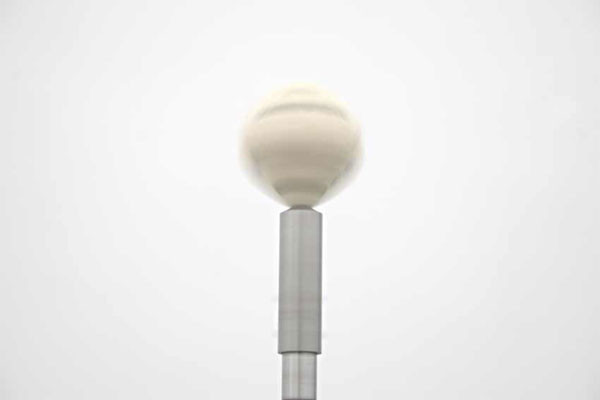 Evariste Richer demonstrates his interest in different notions of matter, space and time by combining their manifestations in the manner of a chemist testing the reactions between elements. In the current exhibition 3 millimètres par an (3 millimeters a year), the concatenation of abstract quantities such as colour, geometric shape and physics suggests the force of attraction and of the exchange between microcosm and macrocosm and the way man finds himself trapped in this magnetism. It is present in Cumulonimbus Capillatus Incus, a cube made of several thousand multicoloured dice that are equivalent in weight to the average adult male.
The ready-made pieces La Sonde I, II and III (three avalanche poles), exhibited here together for the first time, evoke a space that is out of reach, desired and buried. Descartes used the relationship between the stick and the eye to identify the organ of sight and the way the blind use their sense of touch. Each pole, a kind of a tactile eye, bears the colours of chemistry – black, silver and gold – and they stand at the entrance to the exhibition like an investigative tool. The poles – objects submerged in the solipsism of a tool diverted from its intended use – show the extent of the space but also present a mise en scène of its future burial.
This night of the world plunged into the invisible strata of the geological layers of
past (or future?) periods can also be seen in Le Grêlon Noir (Black Hailstone). A black die spins ad infinitum as if the night has rubbed off on its surface, a chance occurrence with no conclusion, or an unshakeable celestial body.
This oscillation between the cosmic dimension and the range of observation, between what we can see and what we know, gives rise to a teleological investigation. This is the case of Les Invariants, a dual mural sculpture portraying ‘Plato’s Cursed Triangle’. This game stimulates an abstract anxiety through the reconstruction of the same trianglerectangle by making one of the fragments of its surface disappear. Despite its logical mathematical resolution, once its latent explanation is suspended this optical enigma, the evidence of a phenomenon, becomes destabilising.

Evariste Richer, who has recently joint the gallery, was born in 1969; he lives and works in Paris. In 2007 he exhibited a corpus of works at the two-part exhibition L’Ile de Morel at the Centre Photographique d’Ile-de-France. November saw the inauguration of his solo show La Rétine at the Contemporary art Centre La Galerie Noisy-le-Sec, and he also participated in a number of group exhibitions, including Raw at IrmaVepLab-Centre for Contemporary art in Châtillon-sur-Marne, Utopomorfias in Viseu (Portugal), and Ultramoderne at the Espace Paul Wurth (Luxemburg). The latter will also travel to the Centre d’Art Passerelle (Brest) in early 2008.