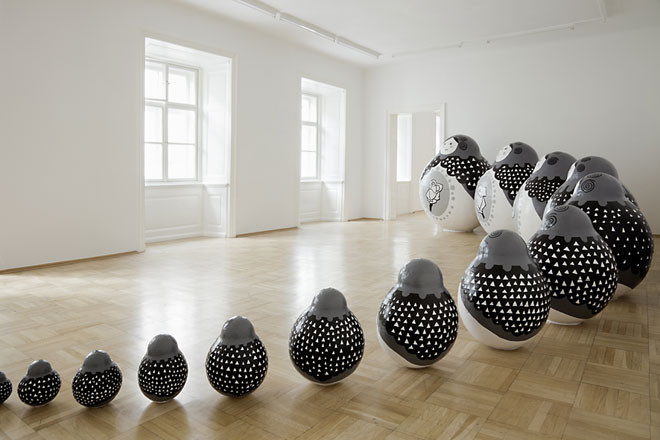 “I would prefer not to”, the fabled response of Herman Melville’s infamous dropout protagonist Bartleby to all questions and queries, might also serve as a motto for Daniel Knorr’s seemingly quixotic practice of not fitting in. Knorr’s stubborn, punk resistance to all features of the establishment, both existing and imagined, is voiced via formally disparate, bitingly ironical and, at times, disarmingly funny works that the artist has produced during the past two decades.

In the 1990s, at the beginning of his career, Knorr chose not to comply with the theoretically well-founded, learned and temperate articulations of social and political concerns in “relational” installation and interventionist art that defined that decade, through which participation, once the postulate of the repressed and underrepresented, became the essential ritual incorporated into the very regime it sought to change. Likewise, today Knorr’s practice opposes the withdrawal into the realm of individual experience and disinterested study of cultural material, and the science of references typical of much of current artistic production.

Knorr’s “materializations” (the artist himself uses this term, signaling his materialist approach, for works realized in myriad media) polemically address the institutional context of art exhibitions, while seeking to subvert the self-sustainable system of contemporary art that demands autonomous objects or at least tangible traces of processes to fuel market growth. Of course, developments in the art world go hand in hand with a larger economic and sociopolitical makeover, characterized by the transition from material to immaterial labour. We are currently living in a meshwork of mediated forces, among which the instant inclusion of otherness allows diffuse power to present itself as lacking any alternative, as all dissident voices are instantly co-opted rather than silenced. Knorr’s ambition, then, is to produce visible “system errors” that formalize acts of resistance to such co-option. Each of his “materializations”—variously a form given to an idea, a residue of historical process, or a technical solution—is an event of difference, inspired and animated by the lesson of freedom taken from the anarchistic and activist attitudes in Conceptual art and cultural history at large. Knorr steals from the many to give to the poor.