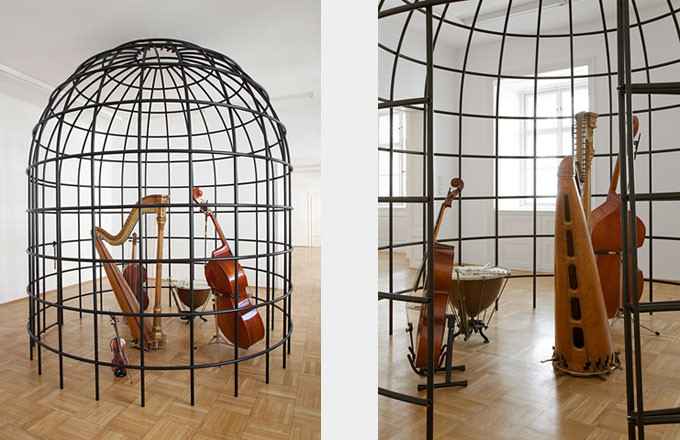 Using a wide variety of genres, Daniel Knorr explores urban space and the relationship between public and private in his interactive artistic projects. Daniel Knorr has become a well-known figure in Vienna since his installation “Explosion” in front of the Kunsthalle Wien at Karlsplatz generated much publicity in 2012, as did his works shown in the group exhibitions “Reflecting Fashion” in the MUMOK and “At Your Service. Art and Labour” in the Technische Museum (in cooperation with the Erste Foundation) and on Museumsplatz. “Lunarium” is his second solo exhibition in our gallery.

“This exhibition examines the state of things from the outside, from where they once were but are now estranged. Works appear to make the power of chance visible. What I want to achieve is a look forward into the unconscious – the place where we think change is something ‘imagined.’

The gallery’s Login, a small room which faces the street, is the place of initial encounter for the audience. In it, a connection is established. The room’s environment has been designed to be the opposite of a solarium. The Lunarium evokes paleness and refinement, which is a recurring emblem of Vienna’s urban culture. It is about realizing the potential of the night – to discover it and reflect on the prospects it holds, while others succumb to sleep. The Lunarium is only open to visitors at nightbetween 12 midnight and 5 a.m.
Nighttime is perhaps our last truly private domain – the time we exist only for ourselves, alone with our bodies and our dreams. A key idea is therefore to introduce an element of wakefulness as a way of commenting and contrasting the pathos of conspiracy and crime that the night evokes.

While the Lunarium is visible only at night, the puddles in the Depression Elevations represent something that is only visible when it rains. This work transfers the idea of the world’s lowest points to the city Vienna. Their forms reflect street deformations and abrasions, incorporating the role of the street as historical witness to certain times and practices. The materials used are plastics containing crystal-clear polyurethanes, which were created exclusively for creative industries in the US. The colors correspond to the current industrial design code for public spaces and are based on colors used for packaging, various consumer goods, and company names. The puddles in the exhibition represent carefully selected sites in Vienna.

The work Block encourages visitors to examine history and cultural traditions from a new perspective.

The classical musical instruments, which have become integral to Vienna in the last several centuries, are locked up in a cage. Are they dangerous? If yes, how so? Originally realized in another version for Artspace in Auckland, New Zealand, in 2009, this work is an investigation of musical instruments as tools of territorial and cultural colonization. As instruments, they have a wonderful sound, and they captivate us with their gentleness and assertiveness. They are expressions of culture and attitude, and they continually remind us of this indirectly every time they are used to make music. Visitors are also allowed to play the instruments; there is a key to the cage.

In the third room is a new series that germinated in the streets of Berlin. At different locations in the city, the artist set up illegal advertisement boards that almost immediately became plastered with posters advertising different events. While offering a subjective view, the cut-outs shown here also document the ‘wild cultural landscape’ of Berlin.”
Daniel Knorr, Vienna, February 18, 2014