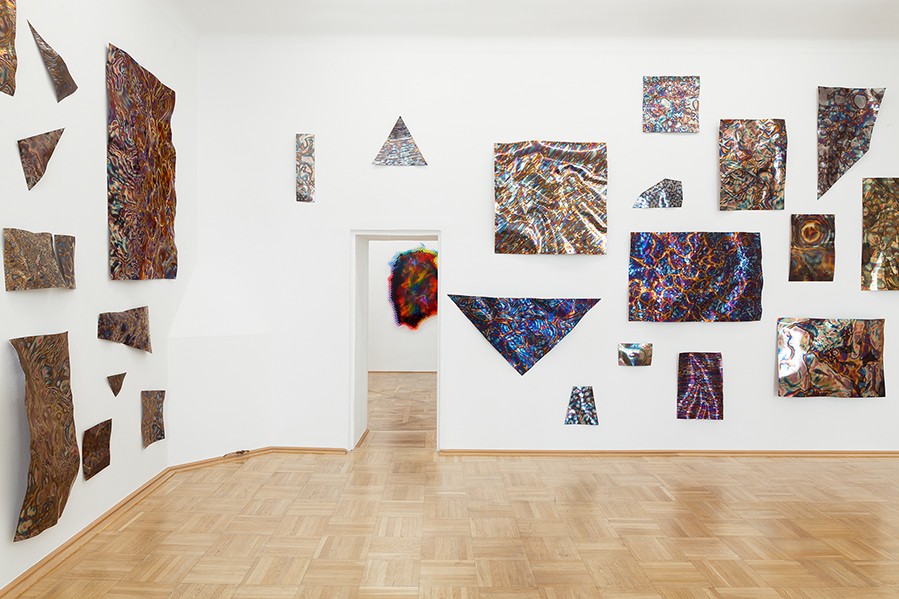 Daniel Knorr likes to refer to his artistic practice as “contemporary archaeology.” His conceptual works revolve around the appropriation and reformulation of reality using different artistic processes according to each new situation. Knorr’s conceptual approach toward making history visible offers a relevant social critique that can be regarded as biopolitical in the broadest sense. His contributions to this year’s documenta consisted of smoke billowing from the Zwehrenturm of the Fridericianum in Kassel, which could be seen for 163 days under the title Expiration Movement, along with an artist’s book in which he pressed objects that had been discarded on the streets and squares of Athens. The book is the eleventh edition of a project that has been ongoing for ten years.

For his Depression Elevations series, which he began in 2013, Knorr creates “puddles” that he transforms into sculptures. He locates surface deformations and irregularities on the street and casts these in a complex procedure to create artistic representations. The resulting colored wall reliefs are completely abstract objects that reflect a specific time and practice. They refer to actual sites (which are named in the title) where surfaces have deteriorated due to their use as civil infrastructure. The title of the exhibition, Reduce Speed Now, is thus not only an important traffic directive that helps conserve streets and ensure human safety, it also has an economic aspect.

The casts in this series are made out of plastic – crystal-clear polyurethane to be precise, which is a material designed exclusively for the creative industries in the US. The copied indentations in the surface of the road resemble “inverted” reliefs in which aesthetics have also been turned inside out. The rough gray cracks in the road become eye candy, boasting a transparency and range of colors that harken back to the Light and Space movement of the American West Coast artists in the 1960s. In the newest works in this series, transparent casts have been mounted on matte lacquered metal plates in colors reflecting the latest automotive fashions.

Instead of warped roads, the casts in the Industrials subseries are of metal parts, corrugated iron roofs, plastic lids, and other industrial materials whose deformation and attrition – from natural causes or long-term use – are embedded in the reliefs. These traces highlight the processing of raw materials in the age of industrialization, with all its global, social, political, and ecological effects.

In terms of form, the works from the last series Minimal Change remind us of 1960s Minimal Art, which was founded on the principle of serial repetition as a means of reflecting on the conditions of industrial production. By focusing on the theme of resources through the exposure of square metal plates to high temperatures, letting them bend and change color and assume rectangular and other undefined geometric shapes, Daniel Knorr’s works once again insist on our awareness of the finiteness of resources.
www.schwarzwaelder.at