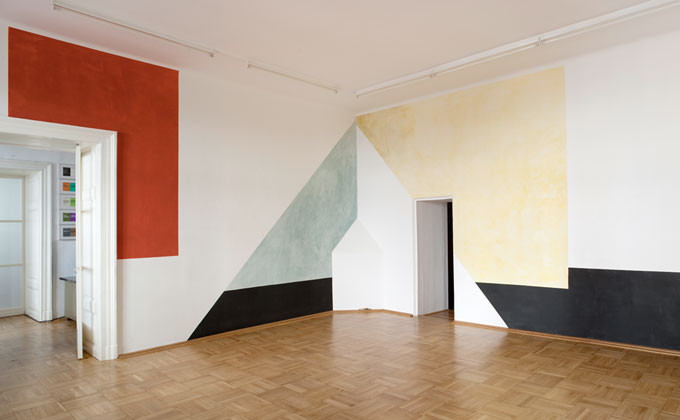 Ernst Caramelle’s much noticed installation at this year’s Art Unlimited in Basel showed the view of a painted room that, depending on the angle, is joined with a reflection of a mural painting that is not directly visible to the beholder.
In our exhibition, a mural painting connects two rooms. Caramelle’s paintings — whether on gesso ground, wood, cardboard, or directly on a wall surface — exhibit views refracted by different perspectives. In them, colored, sometimes washed-out shapes formally refer to spatial and geometrical elements — to architectural found footage. In this system of doubles, mirror images, and juxtapositions, the wall is transformed into a picture. One spatial illusion follows the next, and perspective views mutate into physiognomies. Beholding is reversed into being beheld, and what is visible disputes its own status.
What is reality, how credible is the visible, and what are the conditions of art are recurring questions in Ernst Caramelle’s work since he first began exhibiting in the mid-seventies. “Art is a fake” has been his creed ever since. In his conceptually based œuvre spanning many different media — from drawing, painting, photography, video, and mural art to virtually ephemeral works of sunlight on paper — he weighs the status of the original and fake, production and reproduction, the perception of art, and the context of art reception.
Ernst Caramelle is a rare guest in Vienna. In addition to his striking exhibitions at the Secession (1993) and the Bawag Foundation (2001), the Generali Foundation paid tribute to Ernst Caramelle’s importance as a pioneer of media art in its group exhibition “Replay” (2000). In our exhibition, Ernst Caramelle will be presenting - beside the above mentioned site-specific wall painting - gesso works, “sun pieces” and drawings from the past few years.