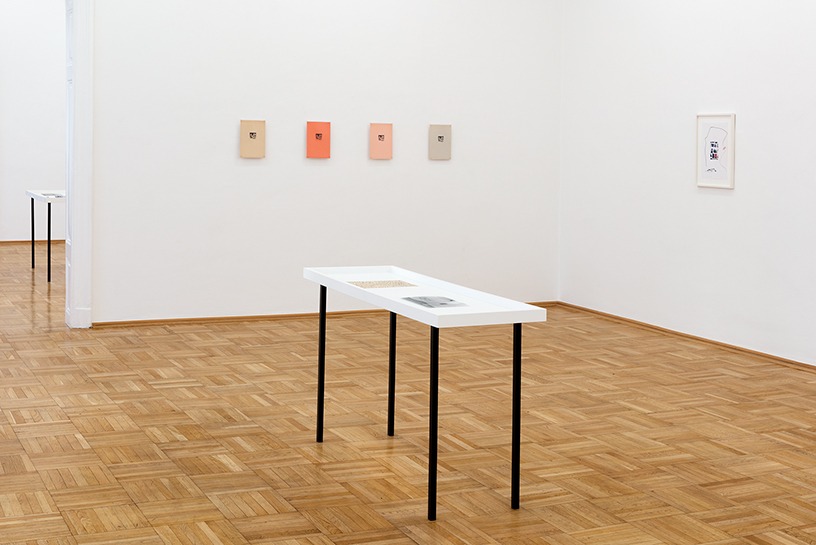 Of all the artists at Galerie nächst St. Stephan, Ernst Caramelle has been with us the longest. After he initiated the group exhibition Multiples in 1978, he had his first solo show in the gallery in 1979. We are pleased to present his eighth and latest solo exhibition almost untitled.

There is far more behind almost untitled than the title suggests. The exhibition plays with a multitude of references, while providing insight into the ambiguity of the phenomenon of the visible. Since his early exhibitions in the mid-1970s, Caramelle has been scrutinizing reality and the conditions of art. He explores the production, reproduction, and perception of art as well as the contexts of its reception.

The exhibition traces an ark from Caramelle’s early works to his current production. Included is a four-part piece that was originally shown in his first solo exhibition in 1979. Not only has it been integrated in the form of a photograph into a gesso work from 1987, which is also being shown, it can also be found in a showcase in one of the photographs documenting Caramelle’s exhibition from 1979. Another early work is the multipartite “Unverkäuflich” (Not for Sale) from 1976, which in a way established the program for Caramelle’s ambiguous works, while also commenting on the art market. This series of sheets of paper makes the contradictory claim: “This work in thirteen parts is called ‘Not for Sale,’ but it can be bought nonetheless.” “Minimal Art” is the title of another, corresponding [M1] two-part work from 1987, while a Light Piece from 2011 in turn refers to a watercolor from the same year. Several works on paper and watercolors that span from 2011 to 2017 bring us up to date with the present and are each a precious gem, seemingly made with an “ultraleichte Geste” (Extremely Delicate Gesture), as one of the ironic titles states.

In another glass cabinet – cabinets are a further intimate space for Caramelle’s artistic investigation – preliminary studies for potential gesso works are presented, including a work on paper with the title “Zeit + Raum” (Time + Space) from 2011, which anticipates later works that focus on temporal and spatial visibilities.

A small drawing “R. auf kleiner G.fläche” (R. on a S. Base), 1997, which stands for “Retrospective on a Small Base,” forms another connection by referring not only to Caramelle’s first exhibition in our gallery, but also to his upcoming retrospective exhibition Ein Résumé, curated by Sabine Folie, which will open in the MUMOK Museum moderner Kunst Stiftung Ludwig Vienna on November 29, 2018, and will be accompanied by a comprehensive catalogue.
www.schwarzwaelder.at