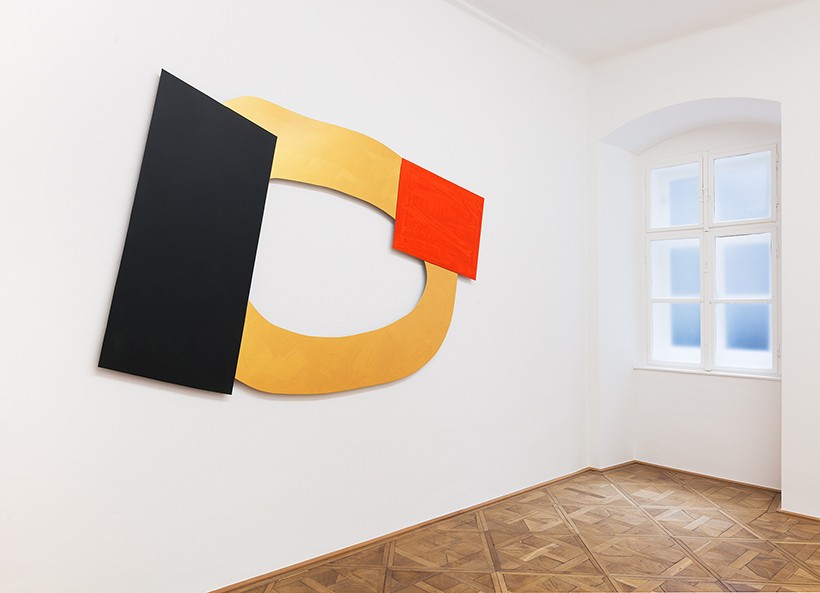 Imi Knoebel will be showing a selection of new works here for the first time, including “Datumsbilder” (Date Paintings) from the “Asteroiden mit gespaltener Persönlichkeit” (Asteroids with Split Personalities) series, which he has been working on at irregular intervals since 2013. These are configurations of color panels set in relation to each other. Consisting of two panels at first, the most recent group of works created for the show in Vienna feature three panels. Disregarding numerical symbolism, the composition of three elements as a new entity simply increases the complexity of the composition and opens new fields of communication beyond the monologue or dialogue – perhaps even taking on astrophysical dimensions. Viewers expecting a specific message will be disappointed – as with Knoebel’s entire oeuvre, these pictures are also created in the tradition of an abstract and non-representational art à la Kazimir Malevich and Piet Mondrian. That is why Imi Knoebel’s art has always had a conceptual foundation and a rational motivation. It also follows its own rules, which, while generally driven by intuition, are also verifiable beyond a binding system. The results are precisely constructed pictorial compositions with incomparably diverse colors and forms arrangements that primarily represent unique visual sensations, while also luring the imagination of the beholder toward open fields of association.

The most recent works in this exhibition are from his new series “Drachenlinien.” “Drachen” are a key motif in Imi Knoebel’s work. They appeared for the first time in the form of white irregular rhomboid panels that, when hung high on the walls in the Galerie Heiner Friedrich in Munich in 1971, created “a light, quiet space” (Franz Dahlem). They reappeared in 1981 in the Van Abbemuseum in Eindhoven, and most recently in 2015 in the White Cube Bermondsey in London, this time high up and elevated to lightness. The kite was also present as an idea in his early series of “Projektionen” (Projections), and since then there have been several references made to it in the form of a diagonal and dynamic element. Three of the “Drachenlinien” in Vienna feature irregular quadrangles that have been painted in different hues of red and are divided approximately in the middle. These cuts were freehand and tend toward either the vertical, diagonal, or the horizontal. The aluminum panels were painted individually with several layers and then reassembled into a unit. These painterly events seem to float in front of the wall, radiating their intense colors into the room. Next to them hangs the more compact looking but equally irregular hexagon, with its five olive green elements. Its title “Ouroboros” adds a mythological dimension to the work. In a manner quite befitting the cheery grandeur with which Imi Knoebel presents his “Asteoriden” and “Drachen”, his fundamentally strict, yet increasingly freehand approach to his work reveals, if nothing else, a poetry of exactitude.