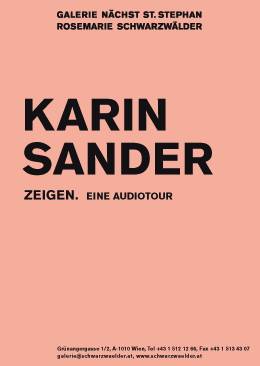 "The work must both reveal something and also remain mysterious. It must transcend itself and gesture towards something that was not previously visible. In other words, it must render something visible that is already present but that has hitherto escaped perception, that exists in a latent state. If the work provokes amazement and perhaps amusement as well, then it is successful." (Karin Sander in conversation with Harald Welzer, Jan 1, 2002, www.karinsander.de)
Karin Sander is known for her pointedly conceptual works, like drawings with office materials, polished chicken’s eggs, polished wallpieces, Patina Paintings, figurative sculptures of living persons on a scale of 1:7.7... or 1:10, wordsearch a translinguistic sculpture, and many more. Her works can be seen at The Museum of Modern Art, New York, the Metropolitan Museum, New York, the Hirshhorn Museum, Washington D.C., the Museum of Modern Art, San Francisco, the National Museum, Osaka, the Staatsgalerie, Stuttgart, the Museum Abteiberg, Mönchenglad-bach, the Kunstmuseum Stuttgart, and the Kunstmuseum St. Gallen, among others.
For her project "Zeigen. An Audio-Tour" Karin Sander asked artists who have exhibited at the Galerie in the past as well as other fellow artists for contributions. Affixed to the walls of the exhibition spaces, however, are only small signs with the artist’s names and a code number. The works can only be heard. Visitors enter the code number into their audio guides in order to access the corresponding artwork. "And so, what is actually on view is a poetic installation in which people with headphones stand in front of blank walls and invent imaginary works of art which are not visible, though this does not mean to say that they are not there." (Harald Welzer, 2005)
"Seeing is not the same as understanding, but hearing renders pictures visible—pictures that blend somehow into the situation created here. Granted, the message that rings out from all sides is that a statement is no substitute for a concrete object. Yet at the same time, all the contributions to this exhibition betray the simple truth that accepting the rules of the game allows them to speak out and strive for a certain typicality. Even the most hilarious attempts at evasion are gestures whose quality is unmistakable: the exhibition consists of the set of its acoustic representatives. The white cell of the exhibition room, carefully tailored for this event, generates a hollow space that is filled with the sensual enjoyment of mutually shared perceptions and whose foundations consist of the acoustic symbols generated by the participants. And precisely between the two lies art!" (Reinhard Ermen, 2005)
A CD is being released as the exhibition catalogue and will include most of the contributions and an introduction by Angelika Nollert, Siemens Arts Program, Munich. Participating artists: Adam Adach, John Armleder, Ingólfur Arnasson, Stephen Bambury, Sabine Boehl, Herbert Brandl, Ernst Caramelle, Alan Charlton, Heinrich Dunst, Helmut Federle, Rainer Ganahl, Franz Graf, Tumi Magnússon, Isa Melsheimer, Finnbogi Pétursson, Julius Popp, Reiner Ruthenbeck, Erik Steffensen, Jessica Stockholder, Günter Umberg, James Welling and Heimo Zobernig. Additional artists of the audio-tour: Polly Apfelbaum, John Baldessari, Reto Boller, Sylvie Fleury, Hamish Fulton, Katharina Grosse, Allan McCollum, Manfred Pernice, Julius Popp, Gerwald Rockenschaub, Adrian Schiess, Stefan Thiel and Lawrence Weiner.
Karin Sander, born in Bensberg, Nordrhein-Westfalen, Germany, in 1957, lives and works in Berlin. Professorship at the Hochschule Weißensee, Berlin, since 1999.
Exhibitions (selection): 1992 Städtisches Museum Abteiberg, Mönchengladbach, 1994 The Museum of Modern Art, New York. "Aura," Wiener Secession, Vienna. 1995 Sprengel Museum, Hanover. International Istanbul Biennial, Istanbul. 1996 Kunstmuseum St. Gallen. 1998 Stiftung für konkrete Kunst, Reutlingen. 1999 Museum Pfalzgalerie, Kaiserslautern. 2002 Staatsgalerie Stuttgart. 2003 Centro Galego de Arte Contemporánea, Santiago de Compostela. 2004 Lodz Biennale, Lodz. 2005 Beijing International Art Biennale, Beijing. 2005/2006 "Rundlederwelten," Martin Gropius Bau, Berlin. "Superstars," Kunstforum, Vienna, and Kunsthalle Wien.
www.schwarzwaelder.at