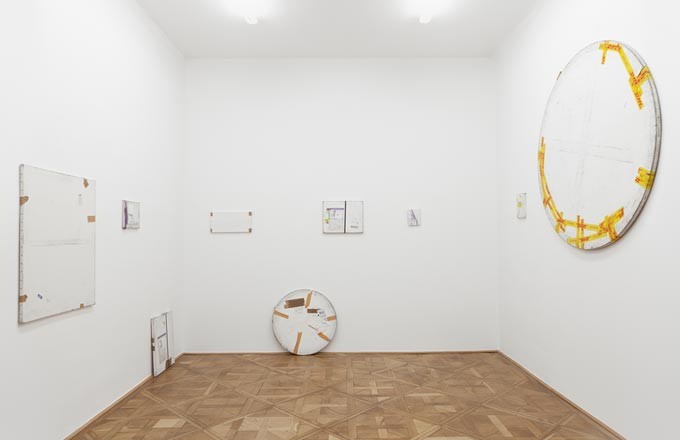 Karin Sander’s fifth solo exhibition at Galerie nächst St. Stephan Rosemarie Schwarzwälder opens May 16, 2014. For her first exhibition there in 1996, she made frottages of the gallery, using graphite to transform every square inch of the rooms onto sheets of paper, which she then bound into A4 books. All the information inscribed in the gallery’s rooms – the drops of dried paint, the drill holes – was thus translated into the medium of books. In the last room, there was also a group of polished eggs. For her second solo exhibition in 2000, Sander presented 3D body scans of living people in the scale of 1:10. Then in 2006, she designed an audio tour with contributions of artists of the gallery; and in 2009, she translated the architectural data of the gallery’s rooms into a source code that was then displayed on its walls.

The following is an excerpt from an ongoing conversation between Karin Sander and Barbara Steiner that began in April 2014.

How do you proceed when you’re asked to create an exhibition? Some of your works emerge “ad hoc” and they’re contextual. Others seem to develop without a direct reference to the actual site.

Most of the time, I have a rough idea of what I want to do. I have a vague image in my mind. Then, I begin to work on this image, although at that point I don’t yet know what it will look like. The site can trigger a work that can then later be transferred to other sites, whether as an idea or as an actual work. Sometimes, I already have something very definite in mind.
This current solo exhibition is your fifth at Galerie nächst St. Stephan Rosemarie Schwarzwälder. How do you see this show in relation to the previous works you’ve done in the gallery?

For the upcoming exhibition in May, I’m going to be showing a series of photographs taken with my mobile phone whenever someone calls me. The phone is programmed so that the camera switches on automatically when I get a call.

In your working method, you follow a set of “playing rules” that dictate how the works are created, while on the other hand, the result is beyond the reach of your influence to a certain degree: The walls have a given texture, people are scanned, your source code is based on the rules of a programming language, your telephone is set up to take a picture when you get a call. I wonder how much “composition” or influence on your part is possible with all these technical, pre-set conditions.

What happens is you get pictures of details that tell you both very little and a lot about a brief moment, about a defined place and its coordinates. When I get a call, my phone photographs a fragment of the chair in front or next to me, or it’ll take a picture of the floor, or my desk. The pictures are like the phone calls themselves. They happen unexpectedly, according to the principle of chance. More pictures will be added throughout the exhibition.

But the photographs don’t look random. They seem meticulously composed.

When my phone rings, my first reaction is to look who is calling. And because I’m distracted, I forget that a picture is being taken at that moment. This means that while the pictures are generated by chance, this is still happening within a clearly defined framework. All the data of the images, along with the location, is saved on the phone. These photographs are then printed, without being interpolated, in the size of 46 x 34.5centimeters, according to the image resolution of my phone camera. What you see in the exhibition are then photographs from all over the world, each representing small fragments of wherever I was at those very moments.
Vienna Gallery Weekend │ Saturday May 17, 2 p.m. │ Karin Sander in conversation with Barbara Steiner

BARBARA STEINER is a curator, editor, and author. Her main interests are institutional critique/criticality, architecture, and forms of display in exhibitions and museums. Her publications include Superkilen – A Project by BIG, Topotek 1 and Superflex (2013), Das eroberte Museum/The Captured Museum (2011), and Negotiating Spaces (2010).
www.schwarzwaelder.at