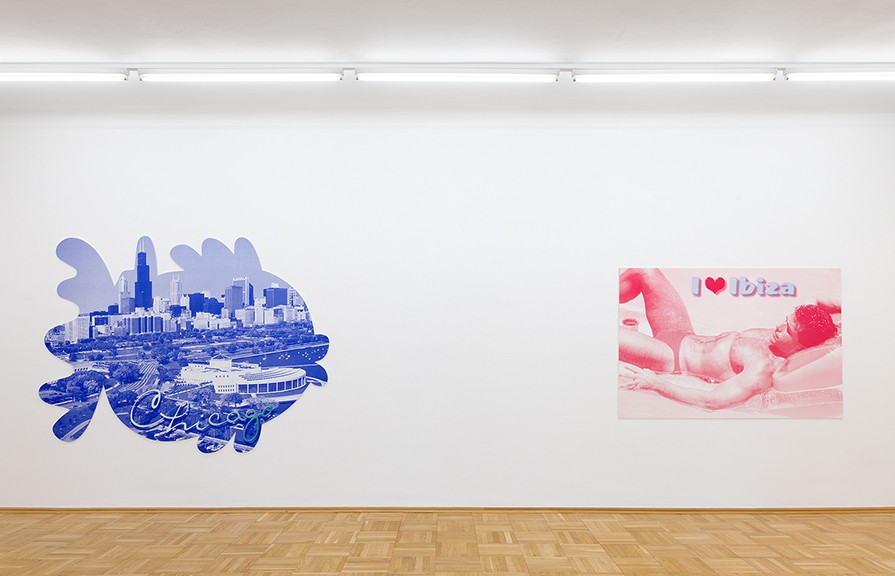 The Chicago, Ibiza, etc. exhibition presents three important figures of contemporary art whose works rely on post-conceptual methods as a way of developing new areas of expression relating intensely but loosely to new ways of life and experiences in the 21st century. This dynamic unfolds within a dialectic between visual thought and language as evoked by the motto for this year’s curated by exhibition series, which is “image/reads/text.”

Since the first half of the 1980s, Katharina Fritsch, who has never before had a major exhibition in Austria, has been creating an oeuvre that is highly influential in terms of sculptural style and forges a new connection between picture (or pictoriality) and three-dimensional form. Few artists of her generation or following generations have revamped sculpture’s iconography in quite the same way as she has. She merges the immediate readability of the shape together with its paradoxical reference to reality and its connotations of today’s collective unconsciousness. For the show in Vienna, Katharina Fritsch chose to focus on her two-dimensional works by displaying her little-known screen prints. The subliminal reference to language that underlies her work becomes particularly apparent in these works, while the radical renewal of the color spectrum, which is also characteristic of Fritsch’s oeuvre, branches out into new areas. These pictures are based on postcards with place names, which are also incorporated as a language element in the pictures. Through associative, sculptural forms, her works transform the postcards into opposite realities of our apparent reality. This series of works also demonstrates the extent to which Fritsch’s entire work is built on the equal treatment of language and pictorial ideas.

Of those artists following the tradition of Conceptual Art in a straightforward manner, Christopher Williams is currently attracting the most attention. Unlike “classic” Conceptual Art, however, his work inverts the relationship between image and text. Conceptual Art may have liberated the picture, but it also completely changed the picture’s internal grammar in order to uphold the principle that visual propositions can be linked directly to thought. Christopher Williams’s work consists of parallel series of photographic images, installations revolving around institutional critique, text works, and publications, in all of which his “will to art” refers to a grammar of today’s visual artistic practice. For our exhibition, the artist developed a situation-specific work that incorporates the location and exhibition history of the gallery.

Mircea Cantor is a key representative of a generation whose work has been inspired by the two other artists in this exhibition. After moving to France, where he studied art, he began to demonstrate a rare visionary dimension that has since earned him exhibitions in the most important museums worldwide in the last 10-odd years. Inspired by this year’s motto of curated by, his contribution includes new video works along with several drawings, creating his first display exploring the permanent link between language and image that forms the basis of his drawings and from which the (seemingly) purely visual metaphors in his sculptural and language-based film and video works are drawn.