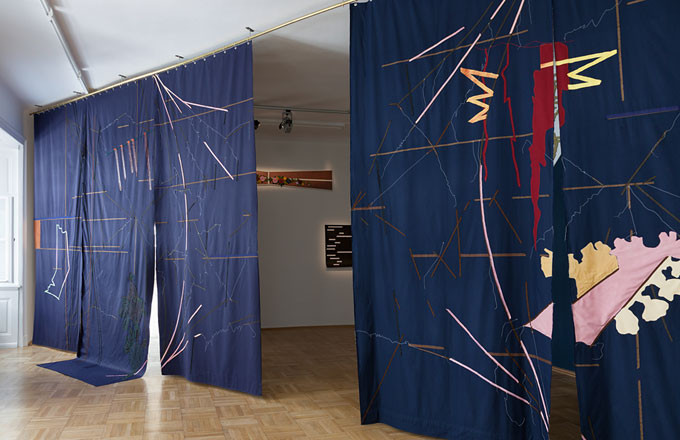 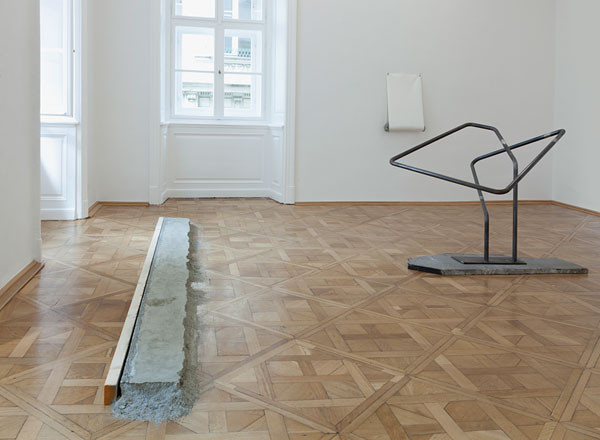 Luisa Kasalicky’s painterly approach toward the exploration of space in all its dimensions (second, third, and fourth) has recently taken the form of moving images. The artist has expanded the distances and dependencies between viewer, picture, and pictorial medium in her sculptural arrangements in stages. Many of her décor-like, background elements, informed by fragmentation, seem to display the need to break out of two-dimensional flatness into three-dimensional space. Kasalicky then coerces these fragments into collage-like cooperatives formed along a common pictorial interest.

Both beyond and within the limits of panel painting, Kasalicky’s works seem to want to focus and direct our gaze. Since the late Renaissance, such stark contrasts between light and dark and choreographed lighting effects have acted as productive tools for highlighting and singling out individual elements from the dark masses, declaring them protagonists. As a painter, the entrance of her work into the three-dimensional realm means, just as in her two-dimensional practice, facing difficult decisions concerning light and shadow.

Luisa Kasalicky employed this strategy in her recent exhibitions “Frontispiz: Juxtaposition” in the Burgkapelle art space of the Museum Moderner Kunst Kärnten in Klagenfurt and “Intro: desiderio” in the Lentos Kunstmuseum Linz. In these projects, revolving spotlights were programmed in a loop to reveal details of the room and the works installed there. This influenced, with dramatic tenacity, what could be seen and what remained in the dark. The lights fell briefly on microcosms of organized groups of objects, allowing viewers a fleeting encounter with Kasilicky’s sculptural miniatures. No sooner had these disappeared again in the darkness that the afterglow of many objects remained in the viewer’s mind, gathering intellectual potential.

Continuing in this reflective vein, Luisa Kasalicky has installed a set of memory images in Galerie nächst St. Stephan. “Intro” (2013), which was originally directly integrated into the museum wall with pigment and thread as a wall piece, has been reproduced in fabric, stitch by stitch. In a cinematic style, the theatrical appearance of the same twilight groups of objects unfolds into an enchanted, playful choreography in which a shadow can carry more weight than its material counterpart.

If we follow the train of thought behind “Invitrospektive,” we must let go of the need to recognize something in an instant. We should not try to give things names. Instead, we should let the images settle in our minds. It’s not about instantaneously realizing exactly how something was – it’s about conceiving what it could be for us in the future.
Jakob Neulinger

"Invitrospektive" is Luisa Kasalicky’s first solo exhibition in the gallery’s main rooms. She has previously shown works in the gallery’s Login (2010) and the Projektraum (2012). New works by Sonia Leimer and Christoph Weber will be shown simultaneously in the gallery’s fourth room.

Luisa Kasalicky was born in Prague in 1974. She studied painting and graphic arts at the Akademie der bildenden Künste (Academy of Fine Arts) in Vienna, where she currently lives. She won the Otto Mauer Preis in 2013.