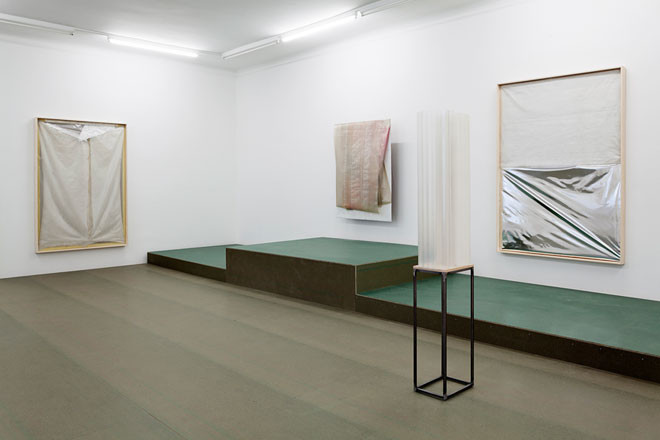 Michał Budny’s artistic body of objects and installations create perceptual potentials through instable processes and ephemeral transparencies. The physical presence of his works relies heavily on the materiality of the sparse, seemingly expressionless materials he prefers –adhesive tape, cardboard, foils, tracing paper, and wood – which are subject to change. His fragile constructions, which are purist and reduced in form, thus reflect unique contingencies and consistencies in time and space.

How does art “behave” in a room? For his solo exhibition “Ashamed and Shameless” – Budny’s third at Galerie nächst St. Stephan – the artist drew inspiration from abandoned spaces, border areas, and marginal situations. He thus employed recycled materials found in courtyards of apartment complexes, such as textiles and blankets that perceptibly radiate the aura and atmosphere of vulnerability of these places.

For the exhibition, Budny installed medium-density fiberboard flooring with integrated platform levels, covering the gallery’s elegant parquet and creating a kind of blank slate. Concealment and exposure are thus integral elements of the different scenes in this staged gallery performance. The multifarious material layers of the pictorial objects are concealing and revealing at the same time. Blankets, pieces of paper stuck together, and layers of overlapping foils converge at the threshold of visibility to question the relationship between picture support and material “application.” Is the concealed image the picture? Or is it simply a frame in wrapping? What becomes visible, exactly, when gaps in the foils offer us a glimpse of what is inside? Is the picture the back of the picture – or is it a bit of the frame peeking through? “Something also seems to be hidden beneath the surface of many objects, as if we were dealing with subtle forms of packaging that protectively wrap material and non-material entities alike. This wrapping contributes to the impression of disappearance, with which many of these works are endowed in spite of their manifest presence. There is evidently an invisible, intangible core, an essence that doesn’t want to reveal itself to us despite intense scrutiny on our part” (Vanessa Joan Müller, “Spaces Between,” in: Michał Budny, Sandpaper, Düsseldorf 2011, pp. 8).

Heightened perception is the theme of Michał Budny’s art. He describes his works as “organisms” of interconnected parts. These organisms have a semi-material and delicate existence. They highlight the strangeness of objects. Because of their materiality, the objects seem to live an inaccessible independent existence; yet in their relationship with the viewer, they act as potential sparks, activating a chain of associations. “They create spaces for memory and encounter familiar or alien recollections, they travel into the past or rotate in temporal loops. Time doesn’t simply elapse here, but it branches out into the simultaneity of every conceivable development, into the simultaneity of actuality and virtuality” (ibid., p. 20).