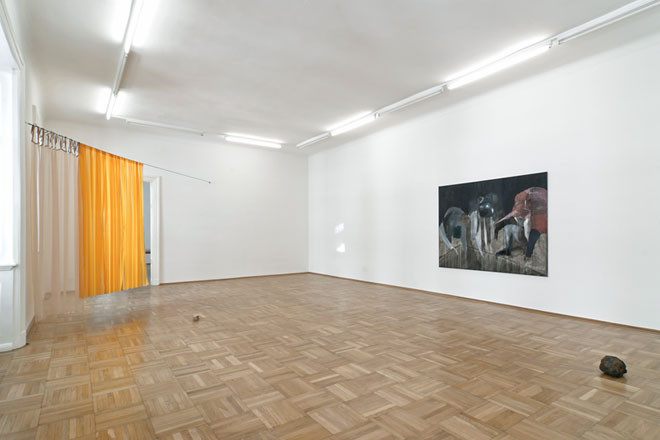 ABOUT
It could be about what we call negative space. Something like silent notes in music, a blank space, a pause. An interval that gives shape to the whole while prompting the simultaneous awareness of form and non-form.
The desire to make can usually be traced back to a real-life encounter with a place, a person, object, story or sensation. Being touched, even if somewhat demented or mentally unbalanced, is often the origin of the necessity to create a new form. Materializing this touch, transforming the negative into positive, blending intimate with common, as a way to apprehend.

A Room of Objects
Each work in the show carries its own story, and they meet in the space of this former Viennese apartment.
The LOGIN space of the gallery, a sort of surplus space with a direct relation to the street, is a frame for Theo Cowley’s work. The installation refers to his not so visible book Compo de Rheto, which is placed somewhere in the gallery upstairs. The book is based on a 17th Century original, thought to have been made by one of the first actors to play the role of Harlequin in the tradition of Commedia dell’Arte. Cowley is interested in recalling the figure of Harlequin, who has been shaped by changing projections throughout history. Simon Hempel’s XTCs grew out of the artist’s interest in the mutual relation between urban environment and human body. The work tries to capture the ‘ecstasies’ of things that have the violent potential to animate the inanimate while unsettling the dichotomy between subject and object. The physicality of Ruth Buchanan’s curtain, filtering sunrays and casting shadows, interferes with the usual movement in the space. Metaphorically, it emphasizes the choreography of the room, a parallel to the choreography of one’s own brain. Olga Raciborska’s paintings merge fictional and real events, producing a multi-layered narrative that suggests the possibility of a personal – but still common- mythology. Clash of the Titans results from her fascination with the now obsolete stop motion visual effects employed in the eighties blockbuster Clash of the Titans. Joëlle Tuerlinckx’s Sol Paysage (the exact title still in the process of creation), composed of stones and tape arranged on the gallery floor, explores temporal distances, both real and mental. Each stone has been transplanted from its original context, the situation in which the artist encountered it: a street in Brussels, a project in Cransac (France), a trip to Africa etc. They embody a recollection of different times and places, dreams and real meetings and issue their own secrets. An imaginary journey is traced by the length of tape which tautologically activates the obvious and real fragment of a floor. Sol Paysage layers multiple temporalities, allowing simultaneously for the perception of reality and representation, the natural and the artificial. One ‘score’ of Imi Knoebel’s Anima Mundi invokes the art as life principles of the Bauhaus School and anchors this contemporary presentation of the new in relation to the past. Negative space is instantiated in the strictly prescribed interval between two elements of Anima Mundi 44-2. These elements are a fragment of a much bigger whole, as is the case for all things, according to Plato’s cosmic idea Anima Mundi. This overarching title opens up the strict pieces, in which colour is the only variable, to the infinity of interpretation.

Art or Life
This show presents art objects that have no hidden agenda, no prescriptions for how to improve our lives. It does not act in practical terms and it has no intention of putting things into practice. This gathering of works in one space avoids any literal engagement with the existential dilemmas of Art or Life, nor do any of the pieces on display overtly engage the subject of biopolitics. The works were not selected for their possible relevance to the theme of Art or Life: Aesthetics as Biopolitics, but on the basis of their potential to poeticize the subject at stake.
The concept advanced by Eva Maria Stadler is a starting point and the genesis of this show. The question of Art or Life: Aesthetics as Biopolitics has enabled the show to come about. It activates the potential of these works to communicate their position in relation to the given context. Silence or sublime aggression are given the possibility to be transformed into ‘real’ speech, to enter politics.
The works in the gallery space are more staged than lived, but they originate from our world and they do bounce back to it.

‘One can only show how one came to hold whatever opinion one does hold. One can only give one’s audience the chance of drawing their own conclusions as they observe the limitations, the prejudices, the idiosyncrasies of the speaker. Fiction here is likely to contain more truth than fact’. 2