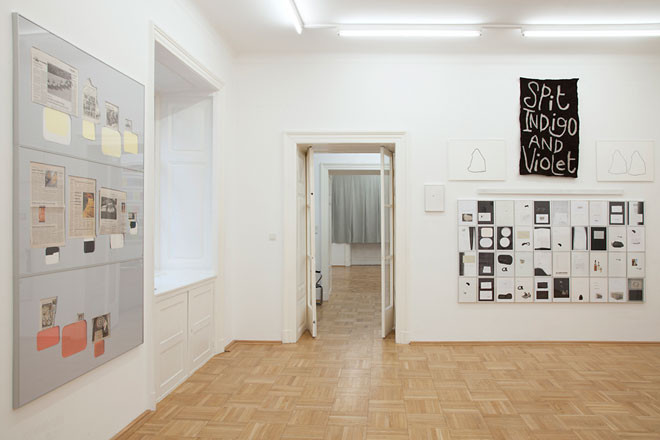 The title above, as complex as it seems, tells the story of this show. As is the case with many of Joëlle Tuerlinckx’s titles, it is worth the effort needed to decipher it.
According to its definitions and common usage, the French word succursale is a spatial extension of a place, usually of an enterprise. In English, it means “a branch,” “subsidiary,” or “auxiliary” that is a division of the main structure. It is a separate entity merely in terms of space, while it is not legally or fiscally autonomous from its core. It is a geographical extension dependent on its base. Bearing the increasingly business-related meaning of succursale in mind, it is interesting to note the Latin origins of the word: succurrere, meaning “to (run to) help.”
This succursale is an annex to the artist’s never-to-be-accomplished wonderings around and on the work and the word in process and around and on the world in progress. It is a sort of extension to the large-scale exhibition that has just opened at Wiels in Brussels, titled Wor(ld)k in progress?
While succursale refers to spatial extension, prolongation suggests a lengthening in time - a continuation and infinity.
The literal exposure of the notion of time and space - rather than a mere representation - is complemented by the introduction of another element of life: friendship. Joëlle Tuerlinckx, in a rather natural and spontaneous manner, has invited artist friends to join in the making of the succursale. The friendly extension of the core subject at stake involves collaborative pieces of various kinds, in which the nature(s) of collaboration become another possible subject of the show.
In this manner, Amicale Succursale: “Prolongation” (...) has the potential to become a cabinet of process, progress, influence, friendship, economy, dependency, work, history, time and other elements of Joëlle Tuerlinckx’s universe.