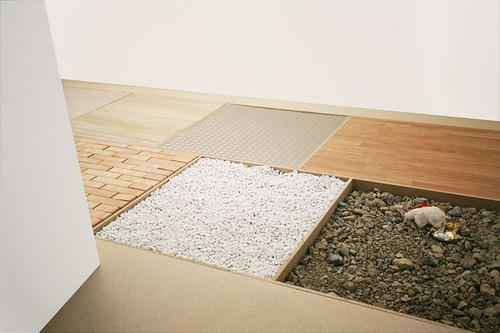 In her exhibition “Series of successive instants” at the Login Sonia Leimer installs fragments of a post-production film sound studio. Embedded in the floor are various surfaces made of different materials conceived to acoustically simulate the illusion of walking on certain surfaces.

Since visitors do not actually enter the space, the effect is purely visual; the auditory character is imaginary. In the tension between the sculptural placement and its possible use the installation interacts with the given site in various ways. As a showcase the space straddles the line between interior and exterior, private and public space. In its windows it merges with the urban space from which it is observed; the reflected image of the cobblestones are superimposed over the different surfaces of the floor of the exhibition space.