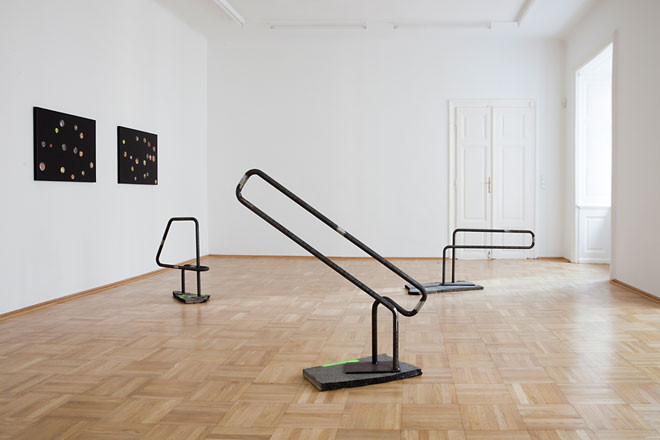 The Italian philosopher Antonio Negri identifies the transformation of the world of labor and the rise of urban space as key features of the twenty-first century. He writes in Goodbye Mr. Socialism: “Today, a city is in itself a source of production: the organized, inhabited, and traversed territory has become a productive element just as worked land once was.” Since the baroque era, the relations between economic productivity and urban development have continued to redefine the logic of urban space in concordance with the logic of profit, control, and social adjustment. According to the analyses of Lewis Mumford starting in the 1930s, the strategy of concentrating people, capital, and labor in the development of today’s metropolitan areas was the cause of the human eye’s growing inability to comprehend the urban mass in a single glance.
Urban spaces and hypothetical territories are key themes in Sonia Leimer’s current exhibition, which finds expression somewhere between real locations (transformed into the imaginary contexts of the cinema industry) and undefined dimensions – like the dimensions of cosmic galaxies that are so far away they seem almost virtual. Sonia Leimer’s works leave scattered clues and traces without ever achieving a complete identity, to the point of becoming visual enigmas requiring constant reinterpretation.
Her “Space Holder” sculptures are urban space fragments isolated in an abstract context; they are potential indicators of pauses, actions, “construction sites” and shifting productive geographies.
Manufactured by the artist as assemblages of urban remnants, like asphalt, metal, and plastic, they denote an interruption in the spatial continuum of the metropolis. They allude to spaces that are occupied for the moment, and that are not accessible. The space holders delimit an urban segment and direct our attention to an event whose nature and meaning the artist does not clearly define.
These objects function on a collective unconscious that defines the everyday use of urban ground.
Like a chessboard of urban phenomena of power and control, they set the stage for a reflection on urban space and its changes, as well as a reflection on its purpose as a place of emotional investment, of possible political militancy, and of flânerie. The square meters occupied by the space holders are therefore not necessarily Antonio Negri’s productive elements, and they no longer belong to the economic organization of territory. Instead, Sonia Leimer’s space holders seem to have a mimetic warning function. They are sculptures evoking the aesthetics of the metropolis, but without identifying with any of its functions in a stricter sense – as if they were potential indicators of urban protests or emergencies, or perhaps silent signals indicating a temporary passage to an unspecified occupy movement.