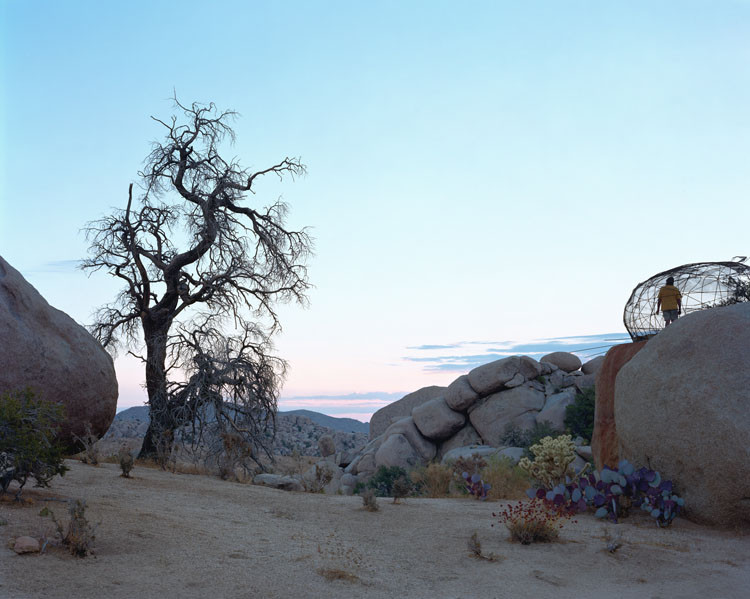 Sean Kelly Gallery is delighted to announce the opening of Alec Soth’s new exhibition, Broken Manual. The opening will take place on Thursday, February 2, from 6pm until 8pm. The artist will be present.

Broken Manual will be Soth’s premiere exhibition with the gallery and the first opportunity to view such a large selection of this important body of work in New York. The majority of photographs that comprise this compelling series were taken over a four-year period, from 2006-2010. They reflect Soth’s increasing interest in the mounting anger and frustration that some—specifically male—Americans feel with societal constraints and their subsequent desire to remove themselves from civilization. The resultant work is a group of portraits of men and the landscapes they inhabit that are poignant, disturbing and mysterious. Soth’s uncanny ability to gain the trust of those whom he photographs gave him unprecedented access to these notoriously elusive individuals, in moments, variously, of brooding, deep reflection or vulnerability.

The genesis of the work is Soth’s fascination with the life of Thomas Merton, the Trappist monk who, prior to his death in 1968, lived for almost three decades at the remote Abbey of Gethsemani in Kentucky. Additionally, Soth studied the years that Olympic Park bomber Eric Rudolph spent evading the authorities in the Appalachian Mountains of North Carolina. In visits to these two locations, Soth realized that both these men’s stories ignited “a fantasy of retreat”.

Soth’s alter ego, Lester B. Morrison, was borne out of his research on this topic. Morrison created a text—the eponymously titled manual that accompanies the exhibition—written to aid others who, like him, choose to retreat from society and live off the grid in a remote area of the country. In it, he offers helpful hints on everything from disguising one’s appearance to creating a pseudonym. Soth, in turn inspired by Morrison’s manual, traveled the country taking photographs that illustrated Morrison’s ideas. Morrison proclaims: “Let this book be your guide. Over the last few years I’ve studied the experts of escape. Let us now praise these lonely men: hermits and hippies, monks and survivalists.” He goes on to explain, “I’ve included a number of photos by my comrade Alec Soth. When you look at these scenes, try to put yourself in the picture. Visualize your new life on the lam. Before you know it, you just might make the break.”

In addition to the photographs in the main gallery, gallery two will include a site-specific installation of the special edition of the Broken Manual book. This highly sought-after, signed and numbered edition is placed inside larger found books, the interiors of which have been carved out to create a secret repository for the manual, an action that mimics the concealment of covert material by someone living a double-life, who must hide evidence of their alternative existence from those around them. A very limited number of the special edition books will be available for sale from the gallery.

Soth has been featured in numerous solo and group exhibitions. In 2008, a large survey exhibition of Soth's work was exhibited at the Jeu de Paume in Paris and the Fotomuseum Winterthur in Switzerland. In 2010, the Walker Art Center mounted a comprehensive exhibition with an accompanying catalogue entitled From Here To There, Alec Soth’s America. His first monograph, Sleeping by the Mississippi, was published by Steidl in 2004 to great critical acclaim. Since then, Soth has published NIAGARA (2006), Fashion Magazine (2007), Dog Days, Bogotá (2007), The Last Days of W (2008) and Broken Manual (2010). Steidl will release the trade publication of Broken Manual in early 2012. In 2008, Soth started his own highly-regarded publishing company, Little Brown Mushroom. His work is in the permanent collections of numerous museums, including the Museum of Modern Art, New York; the Brooklyn Museum of Art; the Los Angeles County Museum of Art; the Museum of Contemporary Art, Chicago; the Museum of Fine Arts, Houston; the San Francisco Museum of Modern Art; the Walker Art Center, Minneapolis; and the Whitney Museum of American Art, New York, amongst others. Soth became a nominee of Magnum Photos in 2004 and a full member in 2008.
www.skny.com