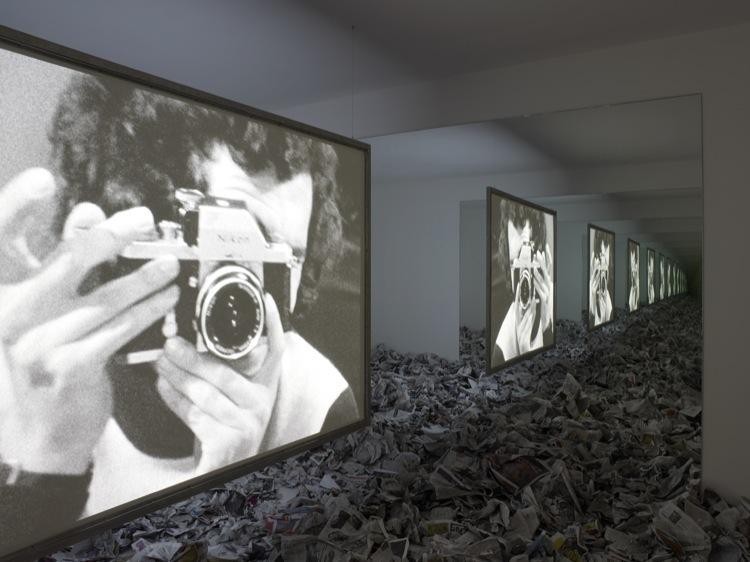 Sean Kelly announces Face to Face, featuring new and historic work by Anthony McCall for the artist’s first exhibition at the gallery’s new Hudson Yards location. Face to Face presents two large-scale installations by the artist: the eponymously titled light-based work from 2013, in gallery one, and Circulation Figures, the recently presented historical work from 1972, in gallery three. This exhibition marks the New York debut of both pieces.

With Face to Face, McCall continues the development of his “solid light” works, a series of digital videos of meticulously choreographed intersecting lines and curves which are projected in darkened, haze-filled rooms, producing three-dimensional forms constructed of light. Until now, the imagery has been projected on walls or floors. For the first time, McCall’s linear forms are projected onto two-sided screens suspended in mid-air, facing each other across the room. The animated line drawings are visible from both sides of each screen, creating paradoxical similarities and inversions with the opposing screen on the far side. At the same time, the two large-scale volumetric forms, which can be inhabited or simply walked around, are seen in direct counterpoint with the original linear “footprint” drawings that produced them.

McCall’s Circulation Figures, most recently seen at Art Basel’s Art Unlimited in 2012, is a room-sized installation of a 1972 performance in London in which McCall invited fifteen photographers and filmmakers to meet at a prepared space to record their own presence. Two mirrors facing each other defined the boundaries of the space and the floor was blanketed with crumpled newspapers. McCall compiled the video footage and still images contributed by the original participants which he then edited into a thirty-five minute looped film that is projected on a suspended screen in the exhibition space; mirrors on the wall and newspapers on the gallery’s floor replicate the original environment created 40 years ago. In McCall’s words, “the figures recorded in 1972, circling round one another and assiduously producing images only of themselves, looked, then, like some kind of hallucination. But re-visited today (in the era of the smartphone camera and social media) those same figures, acting the way they do, seem almost familiar.”