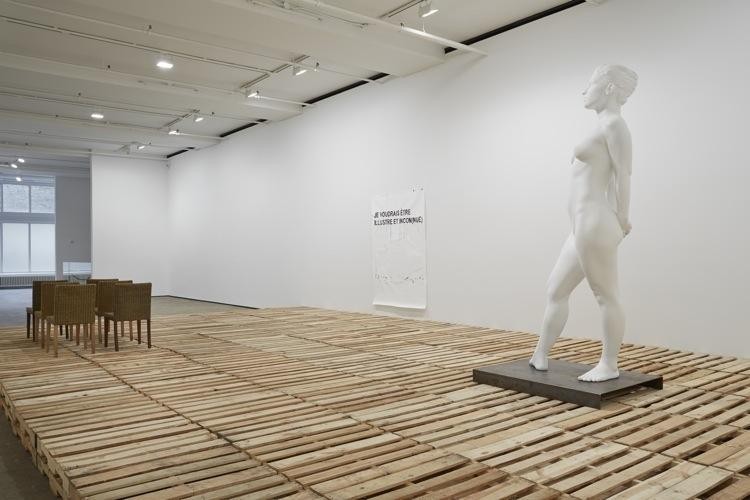 Terra Incognita is Sarmento’s first exhibition in the gallery’s new space and his first major exhibition in the US since 2011.The title of the exhibition refers to the “unknown territory” of a fictitious relationship between two great masters, Edgar Degas and Marcel Duchamp, whom Sarmento refers to as “giants of art history.”

The fictitious relationship between Degas and Duchamp is represented in the exhibition as a dialogue between three major sculptures by Sarmento. Two of the works take Degas' Petite danseuse de quatorze ans as their inspiration. However, in Sarmento’s versions, the young dancer’s form is that of a nude woman, placed in the context of large, multimedia installations. In Sarmento’s Third Easy Piece and Big Easy, the figures are in the same iconic stance as Degas’ Little Dancer, but as opposed to being cast in bronze, they are produced with contemporary 3-D printing technology. The title of the larger figure, Big Easy, is a play on words, a nod to Duchamp’s trademark turns of phrase. Duchamp’s influence is also evinced in the exhibition’s third major sculpture by Sarmento, Parce Que Rose, which is based on Duchamp’s Why Not Sneeze Rose Sélavy?.

Terra Incognita also includes the debut of a new series of paintings, some of Sarmento’s most sublime to date. Seven paintings will be hung in the main gallery, which feature delicately rendered triangular shapes based on the fundamental principles of fractal geometry. Small details of the human form are present in some of the paintings, evoking parallels between these two-dimensional works and the sculptures in the exhibition.

Terra Incognita functions both as an exhibition of individual works and as a single large–scale installation. In Sarmento’s words, “each of the works in the exhibition represents a separate chapter which stands on its own, but in the context of the exhibition, these chapters become a novel.” Together, they tell the story of a connection, crafted by Sarmento, between two of art history’s towering geniuses.

This summer the artist will be the subject of solo exhibitions at two European museums. From June 12 through August 31, an exhibition of the artist’s work will be on view at GAM Galleria Civica d’Arte Moderna e Contemporanea in Torino, Italy, followed by an exhibition at MAMAC Musée d'Art Moderne et d'Art Contemporain in Nice, France, from June 27 through November 30, 2014.
www.skny.com