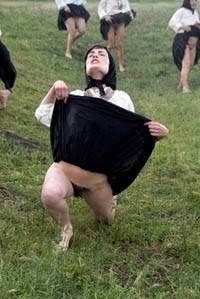 Marina Abramovic’s exhibition is comprised of several video projections, which explore how sexuality and the human body were employed in Balkan pagan traditions and culture throughout history. Abramovic researched Serbian folklore and discovered many historic instances of the employment of eroticism and sexuality to address everyday issues. For example, if it rained too much the women of the village would run into the fields and lift their skirts in an attempt to scare the gods and end the rain. Along with amateur actors, Abramovic dressed in traditional folk costumes and reenacted ancient rituals. The videos examine Balkan folklore and culture, the power of sexuality and tradition.

Please contact Amy Gotzler at 212.239.1181 or amy@skny.com for more information. Gallery hours are Tuesday through Friday from 11am until 6pm and Saturday 10am until 6pm. Please contact the gallery for holiday hours.