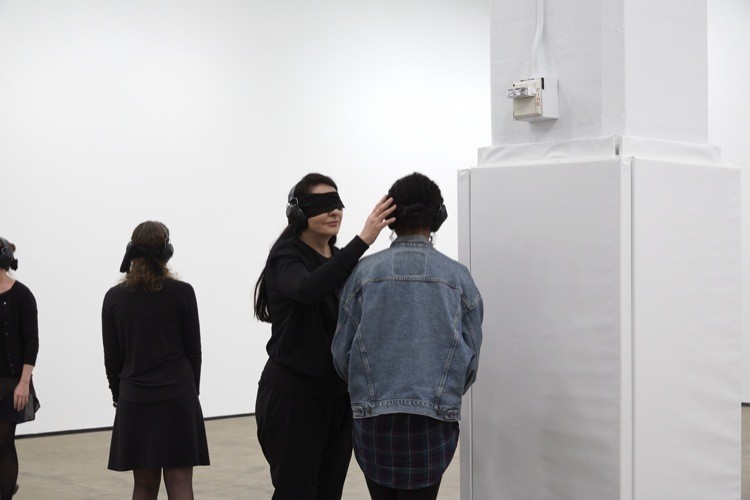 Sean Kelly is delighted to present Generator, a new installation by Marina Abramović, whom the gallery has represented since 1991. This will be the artist’s first solo exhibition in New York since her major retrospective at The Museum of Modern Art in 2010, and her first performative work in a gallery since The House with the Ocean View at Sean Kelly in 2002. The preview will take place on Thursday, October 23 from 6:00-8:00 p.m. The artist will be present.

In Generator, Abramović will focus on “nothingness.” She will transform the main gallery into a space of sensory deprivation, an opportunity for forced introspection. In order to create an uninterrupted, quiet, physical and mental state, visitors will be required to leave their cellphones, watches, bags, etc. in a locker before entering the gallery. Assisted by facilitators who were trained by performance artist and Abramović collaborator Lynsey Peisinger, visitors will don noise canceling headphones and blindfolds. A maximum of sixty-eight people will be allowed in at a time.

Abramović will create what she has previously described as “full emptiness,” a term derived from Tibetan teachings of oneness. Dealing with both the meditative and the communal, Generator will be a unique environment for visitors to push the boundaries of their self-awareness and inner-consciousness, as they are confronted with nothing but themselves and the palpable energy in the room.

In recent years, Abramović’s work with the public has become increasingly immaterial. She has shifted the focus of her work from her own performances, to the audience and their particular experience. This is especially true of Generator, which builds on 512 Hours, her recent ten-week exhibition at The Serpentine Gallery in London, and The Artist is Present, her three-and-a-half-month long performance and exhibition at MoMA. As with these previous two exhibitions, visitors are no longer mere spectators, but an active and indeed crucial element of the exhibition.

As the title suggests, Generator is about creation - namely the production of energy and its transmission. As Thomas McEvilley explained in the catalogue for The House with the Ocean View: Abramović wanted to do a performance free of any artworks, objects, props, or scenarios that could “get between her and her ‘viewer.’ Instead, the viewers would be invited to enter into an ‘energy relationship.’” More than a decade later, in an even more radical form, this is precisely what Abramović intends to achieve in Generator.

Abramović has participated in large-scale international exhibitions including Documenta VI, VII and IX in Kassel, Germany and the Venice Biennale in 1976 and 1997, for which she was awarded the Golden Lion for Best Artist. She also received the New Media Bessie award in 2003 for The House with the Ocean View and the AICA-USA award for Best Exhibition of Time Based Art in 2007 for her performance, Seven Easy Pieces at the Solomon R. Guggenheim Museum, New York. More recently, Abramović was the subject of a major retrospective at The Museum of Modern Art, New York (2010) and at the Garage Center for Contemporary Culture in Moscow, Russia (2011), as well as the recent exhibition 512 Hours at The Serpentine Gallery, London, England (2014).
www.skny.com