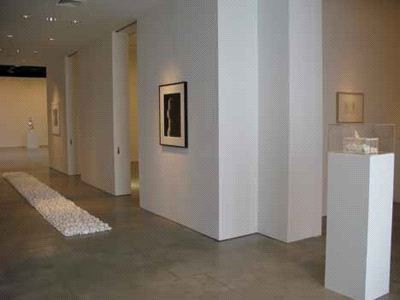 Sean Kelly is delighted to announce the group exhibition, Pure, which opens on March 24. The exhibition brings together works in diverse media that address the formal qualities of the color white and reflectivity. The exhibition continues through April 28. The opening will take place on Friday, March 23, from 6pm until 8pm.

Leonardo Da Vinci stated: “The first of all single colors is white ... We shall set down white for the representative of light, without which no color can be seen.” The color white has conventionally been seen as a symbol of purity and clarity. The exhibition has as its starting point Marcel Duchamp’s readymade Why Not Sneeze, Rrose Selavy, comprised of 152 pieces of white marble meticulously crafted to resemble sugar cubes. Joseph Beuys’s For Washing, used in a famous performance in 1977, consists of a white washbasin and a bar of soap. Marina Abramovic’s Cleaning the House utilizes quartz crystals signifying the rituals of everyday activities. Iran Do Espirito Santo’s Water Glass sculpture, made of pure solid crystal, creates the illusion of a vessel, which is full of clear water.

Several artists in the exhibition reject traditional categories of painting and sculpture to explore new modes of art making which result in a plethora of unprecedented aesthetic and critical practices, ranging from industrially produced geometric abstractions, negating the hand of the artist, to text-based investigations. Joseph Kosuth utilizes a quote by Wittgenstein, produced in white neon, while the minimalist sculptor Dan Flavin uses commercially available fluorescent light fixtures. Jenny Holzer is represented by an LED sign that continually displays aphorisms in white lettering, and Sol LeWitt has created a new white wall drawing for the exhibition.

Though disparate in intent and formal resolution, the thirty-four works that fall under the rubric of Pure share an abiding impulse of paring a work of art down to its core color – be it a perfect cube, a basic repetitive gesture, or a simple declarative phrase. These works of art elicit diverse aesthetic responses to white, reflective surfaces, and the play of light and shadow contrasted with solids and voids.

Please contact Jonah Stern at the gallery (212.239.1181) or jonah@skny.com for more information. Gallery hours are Tuesday through Friday from 11am until 6pm and Saturday from 10am until 6pm.