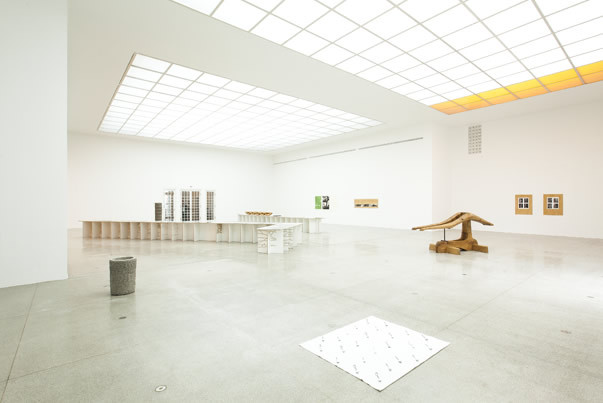 A Singular Form brings together works of art and 'everyday' objects that, because of their nature and of the way they have been displayed, pursue potential uses and meanings that go beyond those usually assigned to them. On display at Secession, these objects should not only propose a particular approach or specific use by virtue of their mere materiality and compositional form; they also enact a release from such determinations and suspend established notions of intention, authorship, purpose and function.

A critical engagement with the form and potential meanings of art and non-art objects might be an all too generic and abstract undertaking. A Singular Form attempts to make it concrete by focusing on the sculptural form and its singularity, accompanied by a displacement from the sculptural to the functional. This shift intends to present the material structures of the objects as a starting point for mapping a series of relations in which the object can begin to act in both expected and unexpected ways.

Two questions have driven this exploration: How concrete or how specific can an object of mediation be? And to what extent can it be abstracted and made generic? Attempts at responding are made through a variety of objects as well as through their versatility – such as a Viking mastefisk and a kølsvin, constructed by Peter Madsen; a number of photographic contact prints from Asger Jorn and Gérard Franceschi's project 10,000 Years of Nordic Folk Art; a Venetian fórcola; a video projection by Hilary Lloyd; Martha Araújo's wearable geometric canvas; a 'portable' sculpture by Bruno Munari; a stretcher; a series of spoons by Nicole Wermers; a travelling object and its housing structure by Ricardo Basbaum; a Mapuche batea; a wallpaper and modular sculpture by Dustin Ericksen; and a number of sculptural pieces, prints and support units by Asier Mendizabal.

The display frames and organises these objects as both things and images in order to heighten their potential agency: Through this singularity of a form that is, at least to some extent, determining itself, these things might set up a way for other people and other things to go around them, to engage with them, to construct relations together.

Pablo Lafuente was invited by the board of the Secession.
www.secession.at