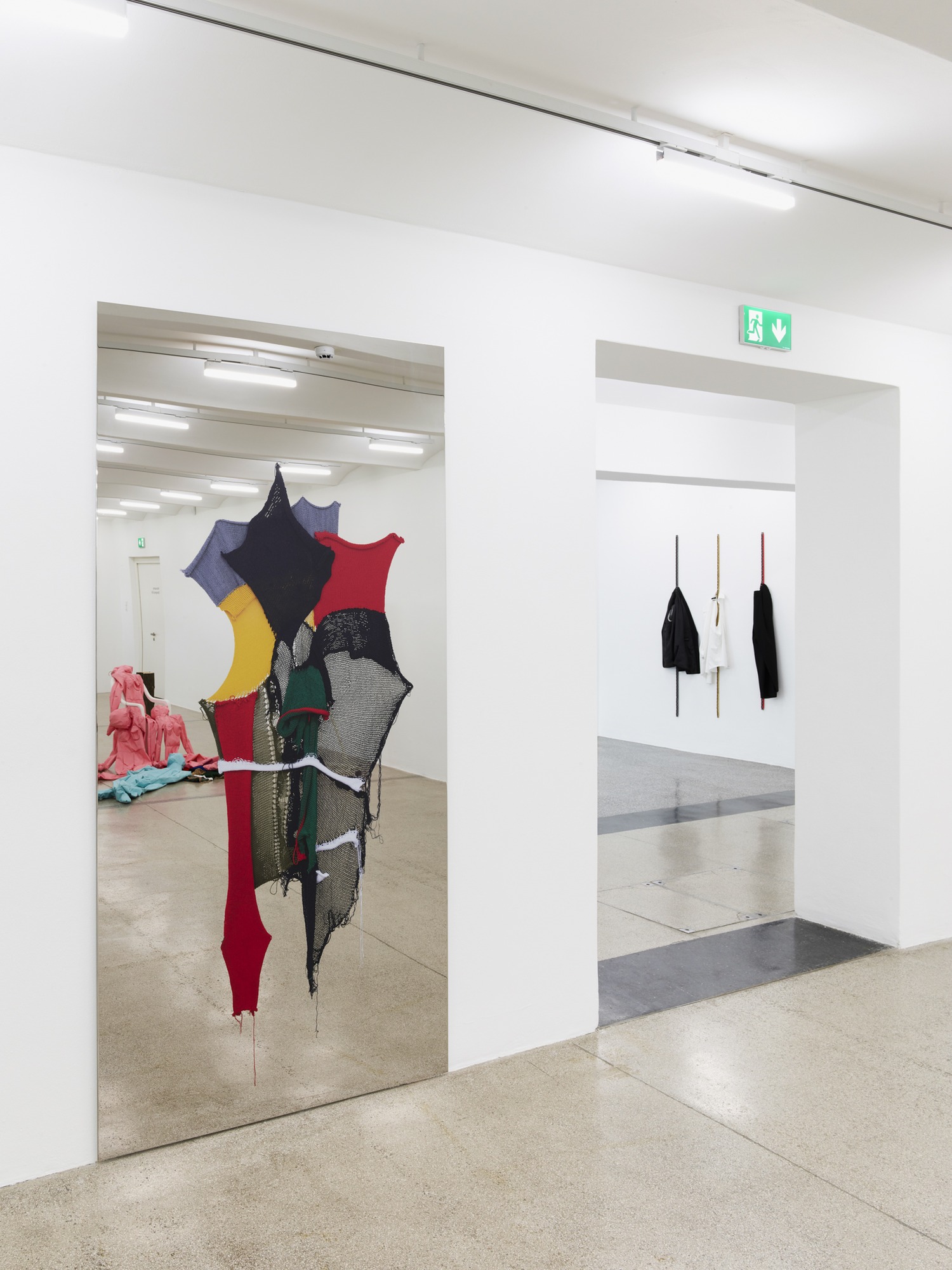 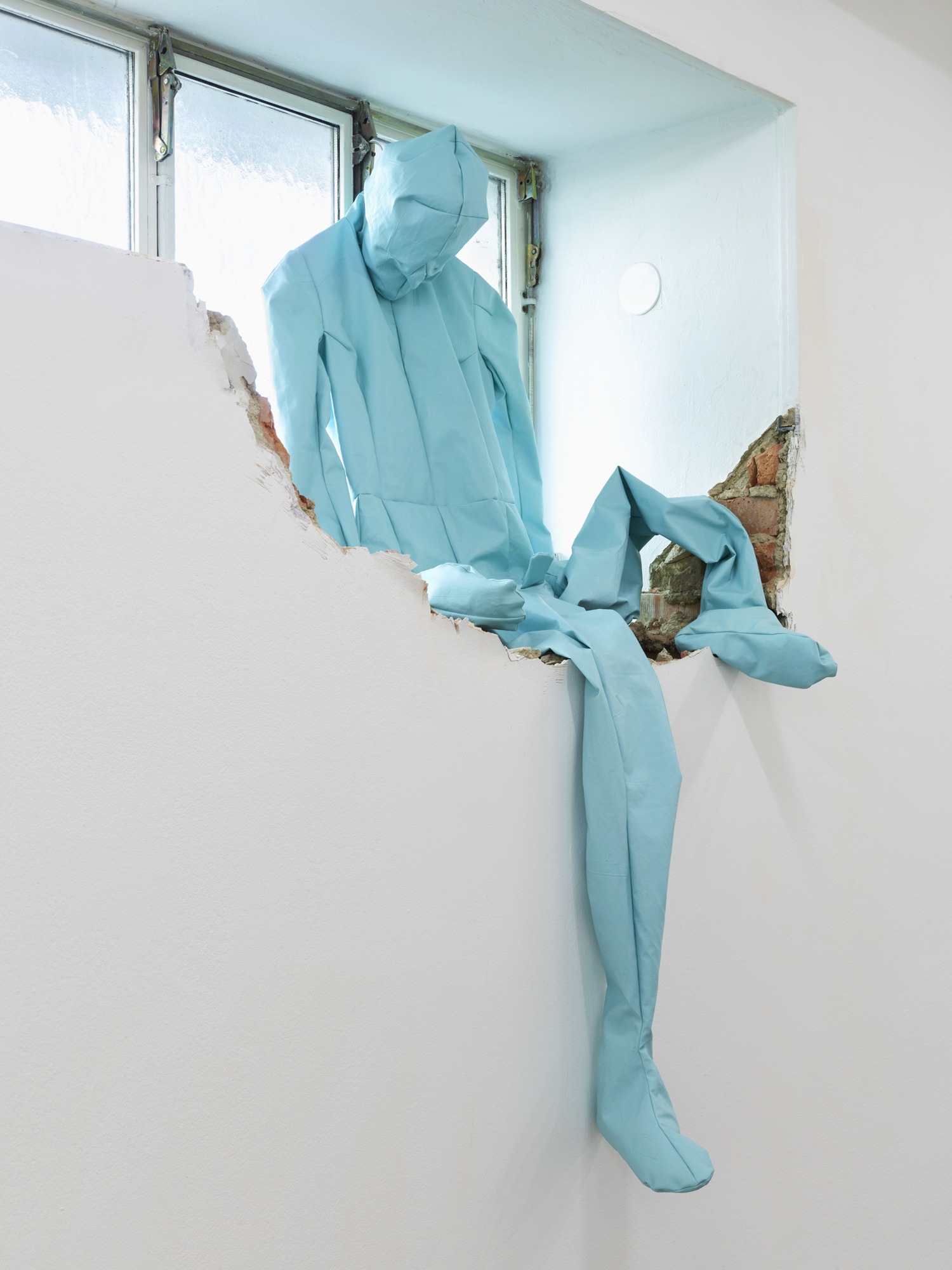 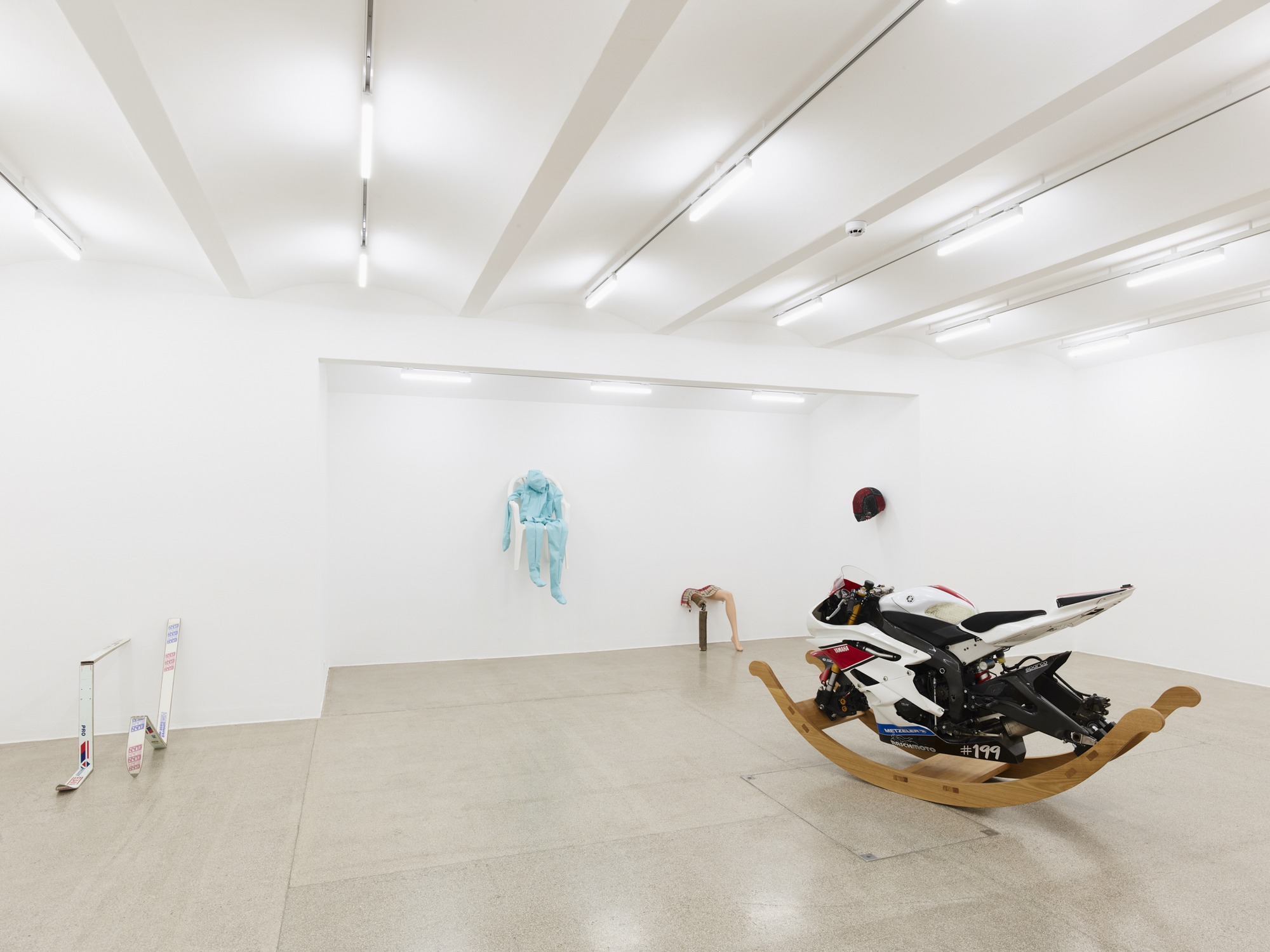 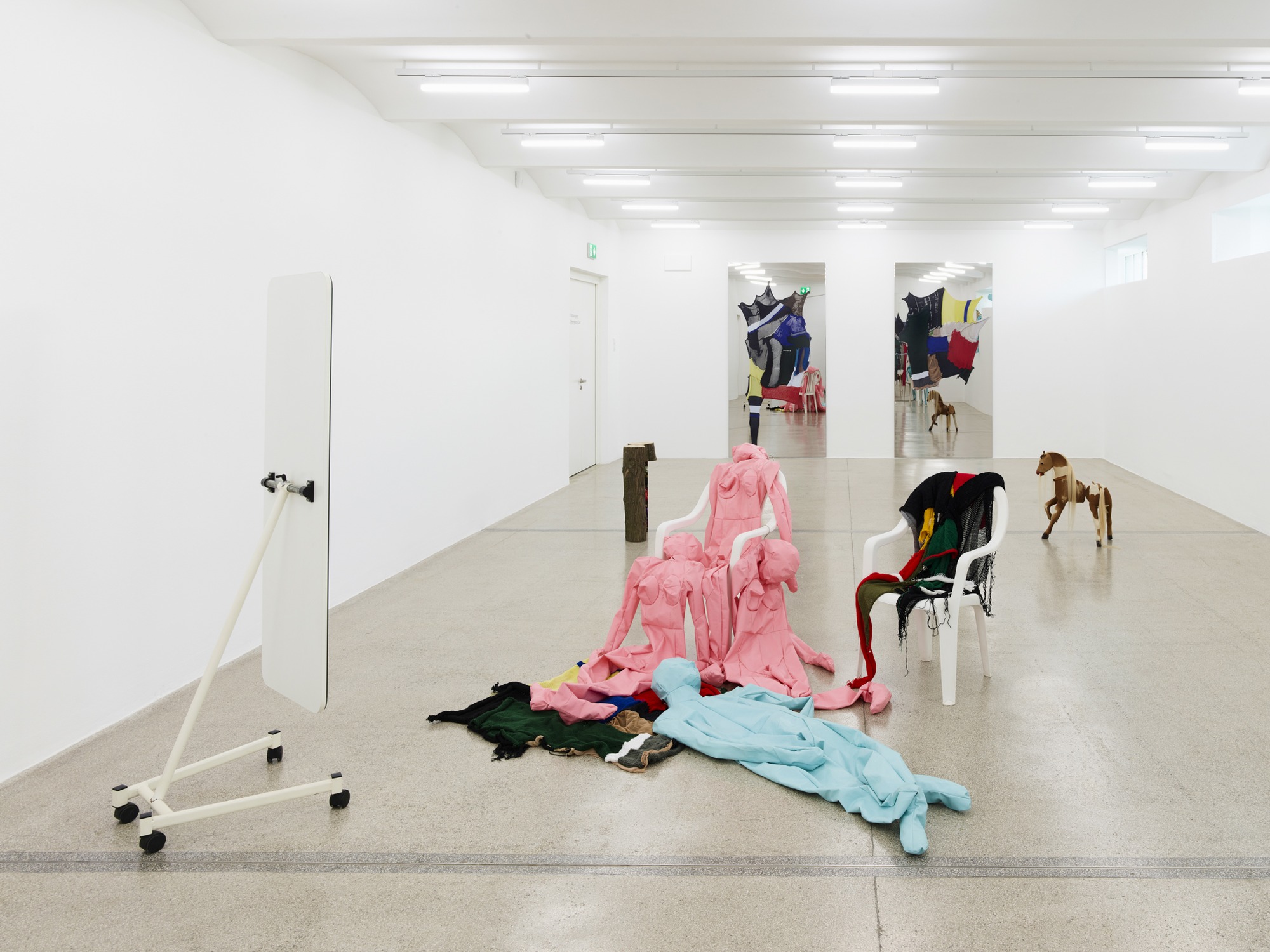 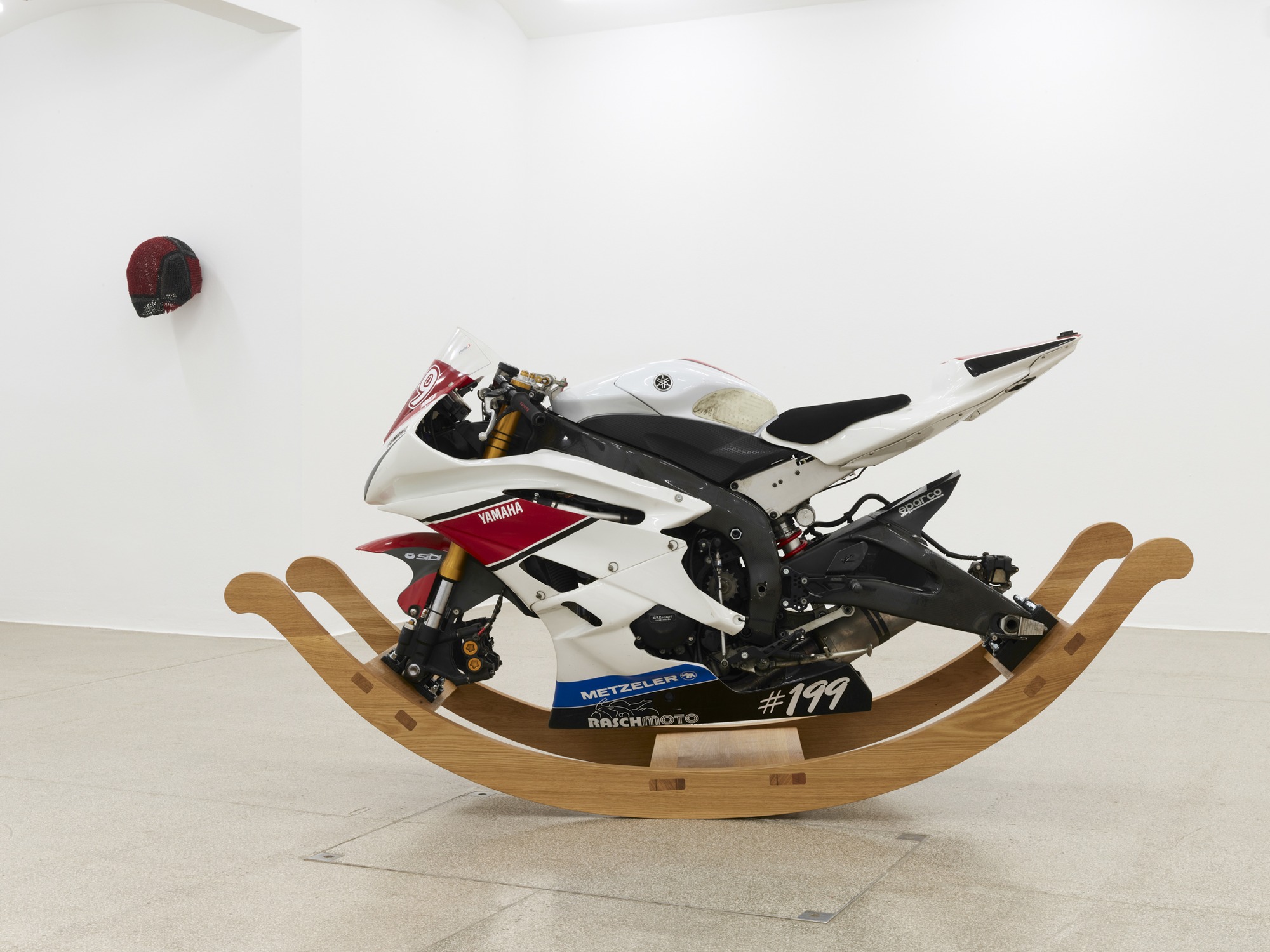 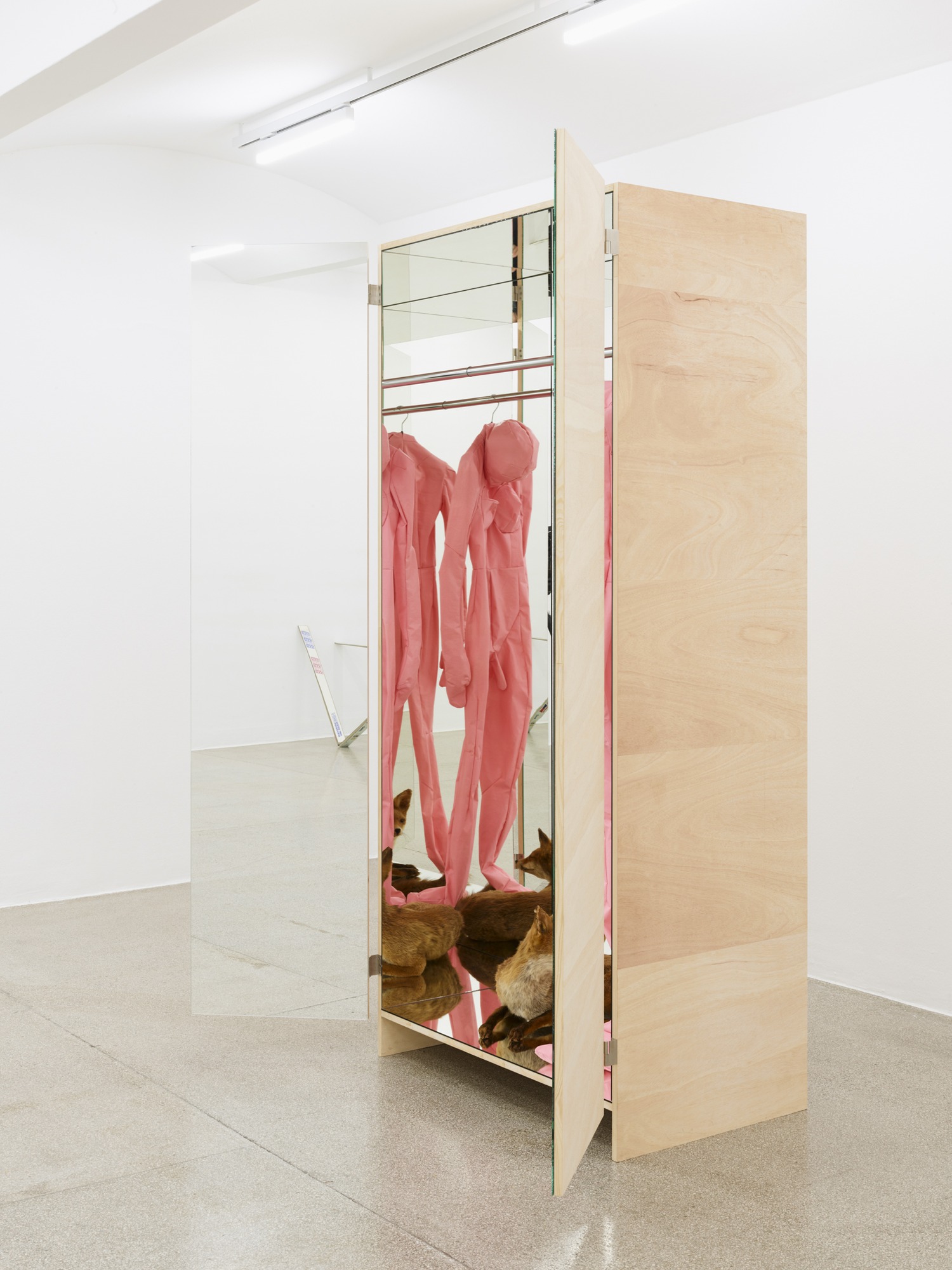 The human body and the various shells that, as skin and attire, define its relation to the world are key motifs in Alexandra Bircken’s work. Many of her sculptural investigations probe the question of the boundary between inside and outside and its relatedness as a permeable membrane, interface, and suture.

For her exhibition Unruhe [Unrest], Bircken has developed numerous new works that interweave themes such as gender, body and machine, power and vulnerability.

Deflated Figures (Pink/Blue) is the most recent in an ongoing series of installations composed of latex suits. Begun in 2014, the series plays with the contradiction between emptied out body shells and the spectral presence of corporeality in the bodies. The colour palette—the figures come in the stereotypical hues of pink and light blue—as well as the variable genitalia, which can be invaginated or made to project, sustain the artist’s scrutiny of gender-related clichés. Confronted with the life-sized figures, the viewers and their bodies become active participants in the installation.

This aspect of the beholders sharing the space of the objects and becoming a visible component of the works is also characteristic of the prints on highly polished stainless steel. The depictions of knitted objects literally operate with the viewers’ self-reflection. Effecting a displacement of the different bodies, their presence in the mirror reinforces the association of pieces of apparel. At the same time, the knitted objects feel oddly incongruous, dysfunctional, and purposeless. In these works, Bircken plays off the materiality of the object of representation against that of the representation itself. The warm and tactile appeal of fabric clashes with the cold flatness of metal.

Bircken’s oeuvre speaks to her abiding interest in fragments and interfaces, on which she reveals not only the structure and materiality of surfaces, but always also the vulnerability of bodies. In some of the works on display the artist focuses on the interplay between the cuts and dissections as well as the hinges and joints that reconnect them.. Her alterations endow objects that are rigid and stable in themselves with an agility and flexibility that—read as symptomatic of the contemporary world—suggest the permanent pressure to perform, to stretch, bend, and twist oneself, and the resulting constant state of inner unrest.

Things retaining their autonomy while being transferred into new contexts is the hallmark of Bircken’s approach of appropriating artifacts and fabrics. By interweaving a multitude of elements, the artist assigns them unwonted and often disconcerting identities. The encounter between disparate objects defines the conception behind her exhibition as well as the complexion of individual sculptures. For example, Bircken has mounted a Yamaha R6 racing bike on curved wooden rockers instead of the wheels. The powerful machine seesaws back and forth like a rocking horse but goes nowhere, despite its fully functional engine. Bircken harnesses the physical and sensual qualities of her material assemblages as well as their symbolic dimensions to elicit sometimes contrasting chains of associations: the motif of the machine as an instrument of power and vehicle of an ecstatic sense of freedom is interlinked with connotations of childhood, craftsmanship and the organic.

On occasion of her exhibition, Bircken has reproduced her diary calendar from 1986, the year she was eighteen. The calendar is full of dense handwritten entries that obsessively revolve around questions of her identity. Passages that now struck the artist as too private were blacked out in the process. Today’s digital trace masks the analogue trace from decades ago. The censorship becomes a graphical addition, a drawing that pulls together the two different periods of time, separated by thirty-three years.

Alexandra Bircken was born in Cologne and lives and works in Berlin and Munich. After training as a fashion designer at Saint Martins College, London, she launched her own fashion label. Beginning in 2004, she adopted visual art as the primary medium of her exploration of the relationship between the body and its shells.

Alexandra Bircken, born in Cologne, lives and works in Berlin and Munich.
www.secession.at