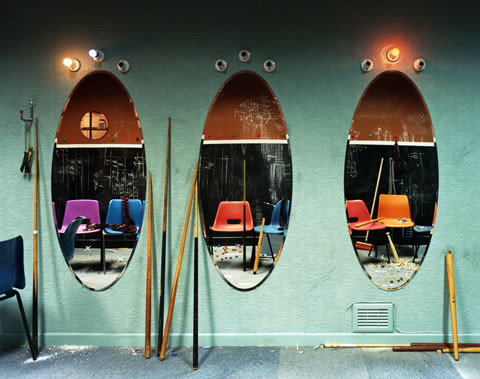 Anne Hardy’s large-format photographs are polyvalent images of artificial spaces created for the sole purpose of their photographic documentation. In painstaking work that often takes months, the artist builds highly detailed life-sized “stage sets” in her studio using found objects, things bought in second-hand stores, leftovers, and refuse scavenged from the street. Hardy then takes a single picture of each set in order to define its depiction, exercising tight control in particular over our perspective on these fictional spaces. Serving as documents of now absent places, the images show situations that are often confusing, filled with traces of human presence and mysterious activities; disturbingly, however, the fictional protagonists are forever absent. Another characteristic feature that pervades Hardy’s work is the ingenious and very deliberate employment of mirrors, which the artist uses to create the impression of spatial depth on the two-dimensional surface of the photographs—an impression, however, characterized by fragmentation or unusual visual angles. Hardy herself describes her photographs as “fictional documentation.” Her art negotiates the question of the real in visual media also by skillfully unsettling the perception of reality by means of its—patent—construction. Anne Hardy’s exhibition at the Secession is the first to present her work in Austria.